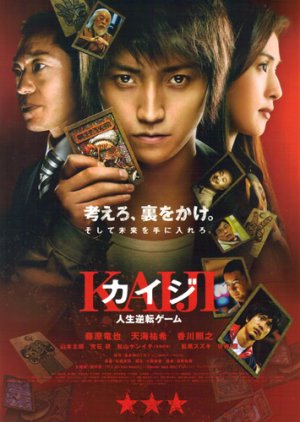 Kaiji Ito moves to Japan after graduating from high school. Unable to find a job and frustrated with society at large, Kaiji spends his days gambling, vandalizing cars, and drinking booze. Two years later and his life no better, a debt collector named Endo arrives to collect money. The debt collector then offers two choices to Kaiji: spend 10 year paying off your loan or board a gambling boat for one night to repay your debt & possibly make a whole lot more. Meanwhile, the unscrupulous Endo is actually conning Kaiji, believing he won't come back from voyage. Kaiji is then up for the night of his life. Edit Translation 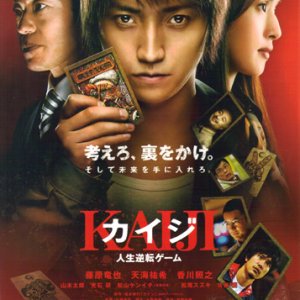 Completed
Kawaikochan
6 people found this review helpful
Other reviews by this user
0
Jul 25, 2011
Completed 0
Overall 6.0
Story 7.0
Acting/Cast 5.0
Music 6.0
Rewatch Value 5.0
Unlike the previous reviewer, I didn't expect anything from this film. I didn't know anything about it. I disclose this because it may have influenced how I experienced the unfolding of the plot.

I enjoyed the story. It's a combination Liar Game (Japanese drama) and 1984 (George Orwell). A secret world unfolds as a people are pitted against one another. I didn't find the the story to be predictable, but there was a slow part in the middle that made me want to fast-forward.

Generally, the main actors all over acted with the exception of Yuki Amami. Lots of screaming, crying, banging of fists, etc. This was the major downfall of the film in my opinion. I debated giving it a 4 or 5. However, I decided on 5 because the overacting did not inhibit my ability to enjoy the film, and I generally think that Japanese actors tend to overact.

The music was nice. It fit the feel of the movie. There were definitely some songs I will look up.

Overall, it's an enjoyable movie, but not a "must see before you die" film. People who liked Liar Game or The Quiz Show will probably like this movie.

Completed
XiaoMei
5 people found this review helpful
Other reviews by this user
0
Aug 5, 2011
Completed 0
Overall 9.0
Story 9.0
Acting/Cast 9.0
Music 8.0
Rewatch Value 8.0
The plot reminds me Liar Game a little, but fortunately, this movie is much better than drama. The action keeps in suspense all the time, so we can't be bored. The main character isn't naive so much or though he learn from mistakes and conclude it.

Hmm.. Though, Endo made the best business at th end.
Was this review helpful to you?
View all

New Topic
Be the first to create a discussion for Kaiji