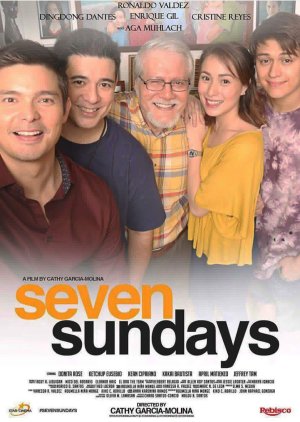 Seven Sundays is a 2017 Philippine comedy drama film directed by Cathy Garcia-Molina. It stars Ronaldo Valdez, Aga Muhlach, Dingdong Dantes, Cristine Reyes and Enrique Gil. Widowed and left by his children who are working and finding no time for the family, Manuel Bonifacio (Ronaldo Valdez) felt lonely. Until one day, he called and revealed to his children, Allan (Aga Muhlach), Bryan (Dingdong Dantes), Cha (Cristine Reyes) and Dex (Enrique Gil), that he was diagnosed with cancer and will soon be dying, claiming that he only has seven weeks to live. Because of the news that hit the family, the Bonifacio siblings reunite and help each other in order to spend their father's remaining days with him. Edit Translation 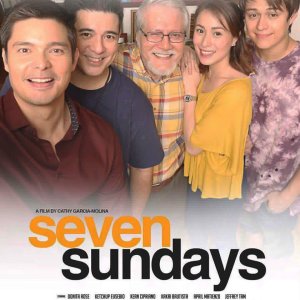 Completed
Schmetterling
0 people found this review helpful
Other reviews by this user
0
20 days ago
Completed 0
Overall 8.0
Story 9.5
Acting/Cast 7.5
Music 6.0
Rewatch Value 7.0
This review may contain spoilers
This is my first Filipino movie and I really enjoyed it. It's the story of a family that drifted apart after the mother died years ago.

The story begins with the father of four grown children spending his birthday alone because his children are too focused on their own lives and problems to visit. On the day of his unattended party his receives news that he has cancer and only 7 weeks to live. He sends a text to his children to inform them of the news.

The eldest son took over the family store and is on the verge of bankruptcy. The second son became wealthy and successful but believes his family only likes him for his money. The daughter has three children with a philandering husband. The youngest child felt abandoned after the mother died and his siblings moved away and is now in legal trouble.

The children decide to come together on a Sunday and throw him a surprise birthday party, but old wounds flare up and arguments explode. After learning of their father's distress over their squabbles, the children agree to get along for his sake and to meet every Sunday at his house. Each Sunday the family comes together on various adventures and learn about each other in the process.

There are ups and downs in the story as wounds and secrets are revealed and healed.

I don't want to spoil the secrets, but I will say that this is not a downer or tragedy. This movie is the definition of heart-warming.

I can recommend this movie with a happy heart. 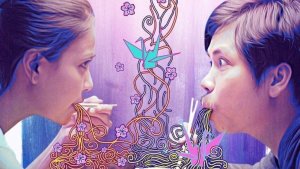 My List of Shows I Watched and Rated
111 titles