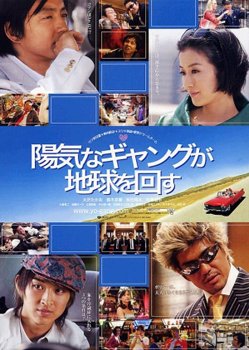 Four strangers (a verbose romantic, a human lie detector, an expert pickpocket, and a woman with a preternaturally precise sense of time)are brought together by chance when they inadvertently team up to thwart a bank robbery. Recognizing the potential of their combined talents, they decide to form a bank-robbing gang themselves, just for the fun and romance of it. Their heists are played out swiftly and coolly, less like robberies than performance art. Eventually, the foursome's good-natured crime streak is interrupted when a man from one of their pasts creates a whirlwind of extortion and double crossing. (source) Edit Translation 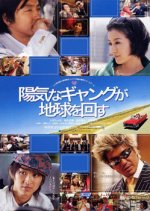 Completed
ZDorama
3 people found this review helpful
Other reviews by this user
0
Nov 24, 2016
Completed 0
Overall 9.0
Story 8.0
Acting/Cast 10
Music 10
Rewatch Value 9.0
I LOVED it! The story is about these four individuals with unique powers: Osawa is a human lie detector, Suzuki clocks off time in her head like a computer, Matsuda can pickpocket anyone, and Sato is the charismatic talker who charms the audience/captives while the heist is commencing. The four individuals happen to be at a bank when they are witness to a half-assed robbery, and after stopping the would -be thief, they decide THEY could do better, and become a slick crime unit making daring and theatrical robberies!

I’ve always loved movies where a team of eccentric people who are aces at “what they do” join together and execute perfectly planned heists, like that team at the beginning of that first Tom Cruise MISSION:IMPOSSIBLE movie, the HUDSON HAWK museum thieves, heck, even OCEAN’S ELEVEN had that spirit I’m talking about…well, CHEERFUL GANG just exudes the same stuff! Dressed in loud, flamboyant clothes, the look of the gang resembled a Sentai Group that even Ishinomori Shotaro would be proud of!

Okay, I’m off to go search for Kyoka Suzuki pics.

Completed
Emily
3 people found this review helpful
Other reviews by this user
0
Dec 4, 2012
Completed 0
Overall 8.0
Story 9.0
Acting/Cast 10
Music 8.0
Rewatch Value 7.0
This was really an interesting movie...
I originally watched it for Matsuda Shota after watching him in Liar Game, but he's so much younger and adorable in this.
This movie really shouldn't be taken all that seriously, as it is first and foremost, a comedy. The main characters are all unique and important to the story in some aspect. The story can be a little confusing from time to time, with a couple things that I don't feel are completely explained, but besides that it's an interesting concept that I think they pulled off well. (Although I feel that the actors and the characters really held this movie together, as opposed to any cohesive story elements.)
I gave the music an 8 just because I don't remember it very well. I don't think it didn't fit at any point in the movie, so that's good. But anything special? I don't remember.
I would rewatch it again, but not anytime in the near future.

I recommend it if you're looking for something other than the usual romantic comedy when you're bored.