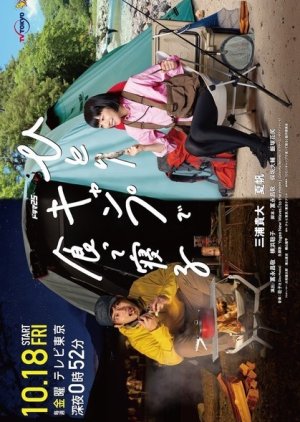 "This is my happiness."

-As one might expect, 'Hitori Camp' is an upbeat and stress-free series that is relaxing to watch. The anguish that one might obtain from watching J-dramas is nowhere to be found.

-This series could easily be labelled as an unconventional comedy; every episode is a wellspring of amusement. Unlike most J-dramas, which rely on slapstick or wordplay, the humour in 'Hitori Camp' comes from odd camera angles, wacky scenarios that are presented understatedly, and just a bit of schadenfreude. The scenes where Nanako talks to herself or role-plays in pursuit of her ingredients are particularly hilarious. She's a bit like Sid from 'Toy Story' but not sadistic and bratty.

-The guest roles are all memorable, with each of the minor characters leaving their mark by imparting lessons onto the two protagonists. Towards the end of the series, they also get more screen-time and some of their personal stories are quite touching, especially in the penultimate episode.

-Kento and Nanako are contrasting but interesting and likeable protagonists that you learn more about as the series progresses. Miura Takahiro and Kaho deliver natural performances, realising Kento's haplessness and Nanako's eccentricities. Filming this series must have been a change of pace for them.

-It is satisfying to see the protagonists' adventures culminate in a self-prepared dish. I don't know whether it is Miura and Kahos' acting or their genuine enjoyment, but you can really feel their enthusiasm as their scarf their efforts down, mostly with a bit of alcohol. Whether the food came from a river or out of a can, it is clearly a source of pride to them.

-Lovely and homely shooting locations. Whether the site is by the sea, amongst the trees or even in the comfort of one's home, 'Hitori Camp' makes it clear that you don't have to be in the midst of the wilderness to experience the pleasures of camping.

-Nicely minimalistic soundtrack, interspersed with some classic Japanese songs that the protagonists absent-mindedly sing as they go about their activities. The theme song, 'To the moon' by Yogee New Waves is worth another listen. https://www.youtube.com/watch?v=UPs6EjmDE38

-While not the focus, the series does take some time to comment on the nature of loneliness and what effects it can have.

-Kento and Nanako never appear in the same episode. Hoping for a future special where the two meet and prepare a combined meal of canned and foraged food.

-Some of the food didn't look very appetising TBH, but this complaint is minor as its more about the journey (and the friends made along the way) than the destination. Unlike 'Yuru Camp', this series doesn't have the creative luxury of glamorising simply-prepared meals made with a camping stove and portable utensils.

Verdict; A relaxed and funny slice-of-life that is visually pleasing and suitable for all demographics to watch.