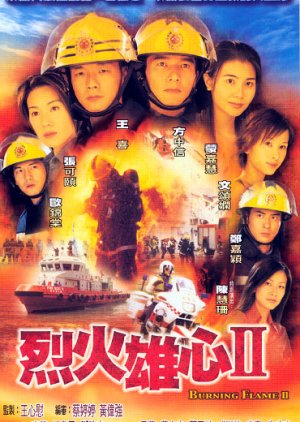 Completed
Clesias
0 people found this review helpful
Other reviews by this user
0
Dec 15, 2019
35 of 35 episodes seen
Completed 0
Overall 8.0
Story 8.0
Acting/Cast 8.0
Music 9.0
Rewatch Value 7.0
This review may contain spoilers
Based on my experience watching the first installment in the Burning Flames series, I was pretty ready to bash the second installment. But to my surprise, this was absolutely a delightful watch, from the plot, the characters to even the theme song!

As opposed to the first installment which mainly relied on melodramatics to progress the plot, the writers decided to go a different way in this show. Instead on the firefighters' lives, the focus shifts to the act of fire-fighting itself. A huge kudos to the writing/research team for adding depth (deeper research into the mechanics and tools of fire-fighting) and also breadth (introducing other parts of the fire bureau that the general public might not know much about, like the airport fire-fighting station, naval stations and divers), and also the production crew for creating the "fires" and "explosions" that made the show more thrilling and yet, realistic.

The characters are also much more nuanced than those in the first installment. Wong Hei's character is no longer the one-dimensional Yau whose only ambition is to be a fire-fighter. The most interesting thing in Hei's portrayal in both shows is that Gei-Tak is is complacent and lazy, an anti-thesis to Yau, and yet he was able to bring out both of his characters to life in a memorable way. The reason for his complacency is because his priorities solely lie in caring for his daughter and though he slowly learned to take his job seriously, his priorities never changed. Yiu-Yiu remains his anchor throughout the show, even with the addition of Yee in his life, and that is what struck me as really good character writing. It wouldn't make sense for a single father to place his only child as a lesser concern just to focus on his job and his love life. His character development comes not from his shift in focus, but him learning to care for his daughter in a different and more challenging way - pushing himself at work so as to make a better future for the both of them and to provide her with a good example to follow.

As much as I disliked the idea of not including any female fire-fighter in this installment, I absolutely love Yee. Maggie Cheung has always been a phenomenal actress and so, it's no surprise that she's able to endear Yee to the audience (me) but Yee is also a rather rounded character, with differing emotions, fears and desires at various points of the show. She doesn't remain stagnant in the show but the change in her perspective or in the way she relates to Gei-Tak and Mark doesn't seem jarring to the audience. Yee might very well be one of my favorite female characters in TVB history.

Alex Fong was really the reason I started on this show as I love him to pieces and I'm on a lifelong quest to watch any show he's in (except Split Second because that was a terrible show and I would not waste a single second on it.) Generally, the love triangle between Wilson, Yan and Michelle annoyed me and I felt that it was one of the weaker plot-lines as it was so unnecessary. The growing differences between Yan and Wilson's perspectives were actually enough for her to leave their marriage and learn to be independent, without throwing in a third party. But at the same time, I adore the friendship between Yan and Michelle. In an ideal world, we would have them best of friends without Wilson boggling it down, sighs. What redeemed this tiresome plot-line was how they all matured through this experience. Flora Chan was charismatic in her role that it seemed that she was the one destined for Wilson, not Yan. (I think Michelle actually became a basis to how she approached her role as Belle in Triumph in the Skies and it worked.)

The theme song is probably the most obvious change between the first and second installment. No longer an anthem for simple bravery, as in Andy Lau's 火焰心 (Flame Burning Heart), Aaron Kwok's 燈蛾 (Moth) is heavier in terms of its beats and lyrics. I never thought Kwok to be a good singer but his rugged/rough singing here actually suits the tone of the song as it refuses to reduce the characters into one-dimensional depictions. It acknowledges the fear in the fire-fighters, their emotions when it comes to their loved ones, and also their courage in setting all these aside to do their jobs.

Sophisticated is the word I will use to describe this show. It properly balances the occupational aspects with the emotional plot-lines, and weaves the theme tightly in the use of its theme-song and especially the characters. Really one of the best TVB drama I've seen in years! (Such a pity that the third installment was another disappointment.)