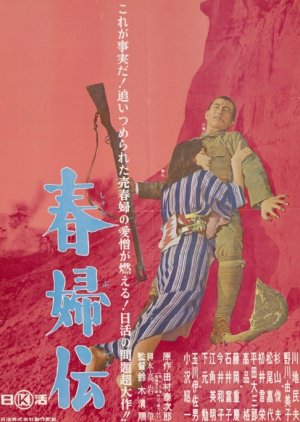 Film directed by Suzuki Seijun tells the story of a prostitute Harumi who was working in Manchuria during Sino-Japanese war. She found there love which took her to the end. Edit Translation 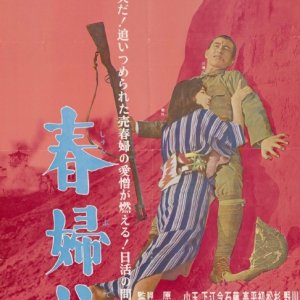 Completed
Senpai
0 people found this review helpful
Other reviews by this user
0
Dec 4, 2017
Completed 0
Overall 8.0
Story 8.0
Acting/Cast 8.5
Music 8.0
Rewatch Value 7.0
It's not really what it looks like. The story is based mainly on the comparison of a woman who gives  herself to men willingly and to the men who voluntarily surrender to the  Country.
A  woman, upset by the breakup of a love affair, travels with the Japanese  army to China during World War II to act as a "woman of comfort." In  reality, comfort women were typically non-Japanese women kidnapped and  forced into prostitution after their villages or towns were invaded by  the powerful Japanese army. This woman, however, goes because "I want to press against many men" to forget the true love that left her. She travels to an outpost in the country and starts work immediately. Women become a hesitant group of girlfriends, neither of whom is very upset about their fate. She falls in love with a silent "perfect soldier" who fits every whim  of her superior, a drunken jester, who ironically becomes wounded with  our heroine, Harumi.
To fall for the prostitute would be to disobey the orders of her superior. What is an ambitious soldier to do? Prostitutes are despised, and our heroine, in kind, despises men who blindly follow the orders of their superiors. There is a strong sense of Japanese pride everywhere. Or is it the Japanese ridicule on how a soldier acts in times of war? Especially important is the Japanese idea of surrender v. Suicide.
Suzuki went on to take pictures of Yakuza and this is considered his masterpiece Kubrickiana. There  are freezes, lighting effects in white and an incredible scene in which  Harumi crosses a battlefield in search of his lover who is thought to  be dead in a tail. She  is wearing full Japanese clothes, sandals, and kimono and crossing and  destroying as the bombs move around her in brilliant white flashes. The camera accompanies her for what appears to be a full mile. The  film is somewhat experimental for the modern audience and assumes that  the viewer knows where Japanese social norms diverge from Westerners.