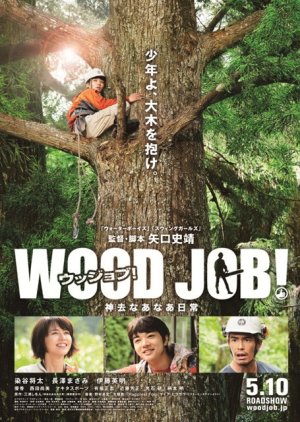 Completed
realdeal
26 people found this review helpful
Other reviews by this user
0
Dec 20, 2014
Completed 0
Overall 10
Story 9.5
Acting/Cast 9.5
Music 9.5
Rewatch Value 10
I just came from work when I decide to watch this movie and damn this is such a relaxing movie and didn't expect I would enjoy this. I expect this will be another slow burn film that will make me sleepy. I even plan to eat while watching but I just couldn't take my eyes off the screen. These characters are just interesting and the visual are enticing. I really don't expect this to be a masterpiece. It has masterful cinematography, suiting guitar music and well acted characters that could potentially make this one of the best coming of age films I've ever watched.

I often tell my friends that if you want to learn more about Japanese culture don't watch anime but watch Japanese movies instead and this film is the very best example of that. Watching this movie will open your eyes about this kind of culture in Japan and on how they cut trees. The act is treated with respect (respect to the forest and forest god) and not just cut a tree then plant after which what I was only aware before watching this movie. The last part of the film is holy freaking moment, a combination of epic and comedy gold.

I watch this film because I am a fan of Shota Sometani and I was not disappointed and though the film's strength is the story it still one of his most important role to date. His performance here is not on par with his performance in Himizu but in this movie he proves he can also do comedic roles, his timing is just great. This film is in my opinion his best film to date and yes even better than Himizu. As for Ito Hideaki, the last film I've seen from him was Lesson of Evil which is such an epic movie. If you love Battle Royale and blood in your movies I highly recommend it. He had a great performance in Lesson of evil but I was more impressed with his performance here, he is such a badass and this movie is not even an action or a Yakuza film, it's a coming of age/slice of life movie lol. The chemistry between them is just great they are the total opposites, one is rugged type dirty guy and the other is like a girl and totally weak but once both of them are on screen there is such a magnetic force between them. You will enjoy Sometani's character development here. Given this film has two great actors and combined it with awesome chemistry makes this movie one hell of a ride.

Overall a great coming of age movie, relaxing to eyes visually and relaxing to ears with its music. A great movie if you want to learn more about Japanese Culture. If you love Departures, The Great Passage, Waterboys, Linda Linda etc. this movie is similar and has a similar vibe.

Completed
Kachidokitik
0 people found this review helpful
Other reviews by this user
0
Jan 20, 2018
Completed 0
Overall 10
Story 10
Acting/Cast 10
Music 9.5
Rewatch Value 10
A very great movie. I wish I found this movie a lot earlier.  It is my dream to live in this kind of peaceful nature place in Japan, so this movie is so perfect for me. A funny and simple story line yet very meaningful movie. Made me want to leave everything and become a wood-guy although I understand that it might not be as easy and as beautiful in real life.

You can learn many things  about Japanese culture from this movie. They way they do their job and and at the same time respect the forest and their culture are so beautiful to watch.

As for the cast, they are perfect especially Sometani Shota and Ito Hideaki. Really love the scene when Ito Hideaki get to know that Sometani is his trainee and he goes "Eh? Kaaaahhh" disappointedly and did the snot rocket (blew his nose snot) right away lol.

I really wanna thanks my friend for introducing this movie for me. Thank you so much.