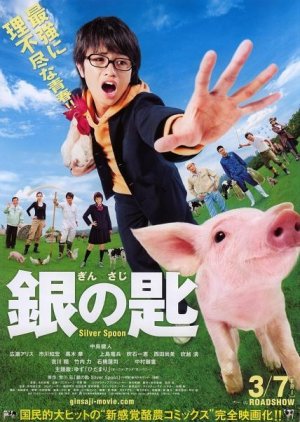 Ooejo agricultural high school is located in Hokkaido. Most students are from families involved in agriculture and their dreams are to continue working in agriculture. Meanwhile, Yuugo, who graduated from a prestigious middle school, applied to the Ooejo Agricultural High School just because the school has a dormitory. Yuugo, who grew up in the city, finds himself in an unfamiliar environment at Ooejo Agricultural High School, surrounded by nature and animals. Yuugo is also the only one who doesn't know what type of career he wants to pursue. Yuugo becomes impatient. He goes through struggles everyday, but he he also gets to know the other students and rural life in general. He begins to grow as a person. ~~ Based on the manga "Gin no Saji Shiruba Supun" by Hiromu Arakawa. Edit Translation 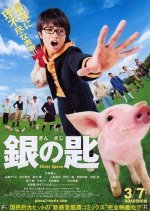 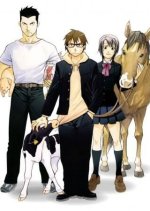 Completed
Cinnamaroll
10 people found this review helpful
Other reviews by this user
0
Dec 1, 2014
Completed 0
Overall 2.0
Story 1.5
Acting/Cast 1.0
Music 3.0
Rewatch Value 1.0
This was just a hot mess. It's like someone dumped a Silver Spoon puzzle on the floor and put random pieces together leaving out 60% of the pieces.

The storyline has no rhyme or reason other than just to be there, and has the nerve to move at the speed of light. I just know anyone who had never watched the anime/read the manga, was probably very confused. They are first introducing themselves in class, then are close buddies within 3 minutes by the next scene. Huh? No character, nor story, development at all. I even had a hard time trying to figure out which episode they were pulling from the whole time. Sequence and continuity? Guess that didn't matter, either. "Hmmn, I'll just jam these two pieces together whether they fit or not! Ha ha ha ha ha... "

There's no making up for the hodgepodge storyline, either. The person I thought would be casted the worst was Inada Tamako, since I thought her appearance could only exist in cartoon form. Turns out she was the only good casting there was. The actress fits her perfectly in appearance and portrayal, which is a remarkable feat. I don't know what happened with the rest. Mikage is a goof troop that isn't reserved which makes her some other random character that didn't exist, but just has her name. The charm, rural eloquence, and mystique is completely missing from her. Ichiro is a jovial guy that pokes fun at his friends... how about NO. Completely opposite of the actual character. Mayumi (cheese fanatic) is completely indistinguishable. I'm sure some girl said she was her, but I can't tell who that was, even after rewinding.

The worst of the worst? Hachiken. Once I made sure I was, indeed, watching the correct film, I had to wonder if the people who made this movie watched the correct anime. Hachiken had been rendered unattractive, assertive, forward in regards to Mikage, and seems to have no lessons needed to learn. "Gin no Saji" movie creators... go home, you're drunk. They took the setting and the characters, then created something entirely different. Something that is entirely a mess that is hot.

I really didn't have high hopes for this live action, however, I didn't think it would be this terrible. I thought the &quot;xxxHolic&quot; live version was the worst I had seen (they messed that story up so bad). But this, hands down, far surpasses that. I say don't waste your time, or critical thinking skills, on this travesty.