Let’s put his works aside and focus on one, The Crucible. If he was my child, I would not let him act in such a film even if it meant eternal fame and wealth. As a watcher, I felt my heart rip to tiny pieces watching the suffering of the young children at the hands of sick adults. And Seung Hwan was the main child character. And how he suffered! And how he cried! And how he expressed his pain through every single way. A child going through agonizing mental and physical pain. He is sexually assaulted. His younger brother is assaulted right in front of his very young eyes. He can’t protect his brother. He can’t protect himself. He’s either sexually assaulted or physically beat. A child living with the excessive mental and physical pressure, the burden of responsibility for his friends, the anger and the injustice and the urge for revenge. I wouldn’t survive if I were him. But he did. And the actor did. Good Lord! I still wonder and always will how those kids shot that film.

One more gorgeous child actor. I always connect him with Yoon Chan Young. They’re around the same age. They look similar. And they have this powerful energy flowing in them, positively affecting everyone else.

He plays the rebel pretty often. The arrogant and spiteful child. Of course due to inescapable circumstances. Liked him in all his roles, especially The Suspicious Housekeeper. Having his space and time in the 20-episode family drama added to the reasons behind his sparkling performance. He’s a welcome face in any drama and a future star.

Let’s talk about this strong young lady. Soon enough, this kid will play those independent women roles and sweep the world off its feet. You wait and see.

Hearty Paws with the legendary child actor Yoo Seung Ho was her debut film. The depressing story would not have been so depressing if it were not for the two remarkable children. Hyang Gi broke Seung Ho’s heart and in breaking his heart she broke ours. I will never re-watch that film. They were so painfully convincing.

Then it was Wedding Dress. No, I’m not recommending it. I gave it a 10 but I never recommend it. A dying mother trying to leave good memories to her one and only child. The child shifting from anger at the frequent absences of her mother –due to the illness- to the harsh epiphany of the real situation. How would a child of 10 react when she finds out her only family is dying. She broke my heart like a hundred times during the two hours. The unbelievable pain didn’t stop her from trying to soothe her mother and assure her that she’d be fine even after her death. Imagine the inner conflict! Imagine the forced maturing of that child.

She’s the main child actress in The Queen’s Classroom. The only one who is able to ‘’stand and deliver’’ her opinions to her ‘’witch’’ teacher. Not because she’s different than other children. But because her feelings would suffocate her innocent childhood.

My love for Chae Sang Woo started in this scene. This is the making but the passionate scene of ‘’cut the crap’’ that pierces the heart shows

Not anyone can pull this scene off. Look at the faces of the adult actors around him. He stunned them. He stunned me. I can still feel the pain this child actor sent in me. They wouldn’t have found a better actor to play Jang Hyuk’s child version.

He was very good as the eldest boy in The Suspicious Housekeeper. But I’ll wait for more passionate roles.

Who doesn’t love and admire this young lady? Who can help it? One can’t. She’s so pretty. So talented. So real. So powerful. So lovely. Where shall I start? The Man from Nowhere that made her and Won Bin stars –which I haven’t watched yet. I know! I read that Won Bin quit smoking during the shooting of the film in order not to hurt her. I Am Dad where she plays a sick daughter whose dad does whatever to save her. A Girl at My Door where she is a sick and mentally disturbed child with a dark side and a troubled childhood. A child you cannot help but sympathize with even though you feel the dark energy coming out of her. Manhole – the not so good horror try - where she faces a serial killer and fights her away out. The Queen’s Classroom where she plays the clever kid putting on the perfection mask but hiding many secrets. High School Love On where she’s simply what we imagine an angel to be.

Something is troubling me, though. Sae Ron is not 16 yet. She’s a child. But if you’re a hardcore fan you’d have noticed by now she’s already being treated as a woman. Her outfits for example. I haven’t started watching Mirror of the Witch but starring against Yoon Shi Yoon who’s 16 years older is not the best choice I think. I’m worried about her emotional health of being treated as a woman when she’s just a child. Am I being overly protective?

If your favourite child actor hasn't appeared out yet, hang on. We have a way to go! 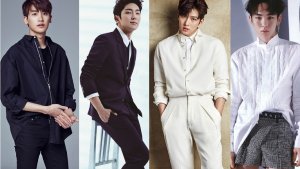