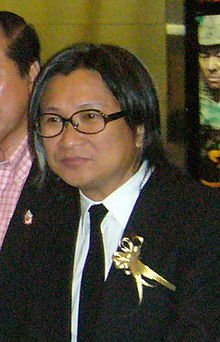 Chan was born in Hong Kong. He spent infancy in Hong Kong before moving with his parents to Thailand. He later studied in the United States where he attended film school at UCLA. He returned to Hong Kong in 1983 for a summer internship in the film industry. Chan never returned to UCLA to complete his studies. He served as a second assistant director and producer to Basil Lee on Heroes Are Not Fat, which was set in Thailand. He also was a location manager on three Jackie Chan films, Wheels on Meals, The Protector and Armour of God.

Chan was a co-founder of United Filmmakers Organization (UFO) in the early 1990s, which produced a number of box-office and critical hits in Hong Kong, including his own: He Ain't Heavy, He's My Father. Other critical and commercial successes followed, including Tom, Dick And Hairy, He's a Woman, She's a Man and Comrades, Almost a Love Story.

Chan's 2005 film, the musical Perhaps Love closed the 2005 Venice Film Festival and was Hong Kong's entry for an Academy Awards nomination in the best foreign film category. Perhaps Love became one of the year's top-grossing films in China, Hong Kong and Taiwan, and received a record 29 awards. Chan next directed The Warlords (2007) and produced Derek Yee's Protégé (2007). The two films were the two highest grossing Hong Kong-China co-productions of 2007. The Warlords grossed a record RMB220 million in China and over US$40 million across Asia, and garnered 8 Hong Kong Film Awards and 3 Golden Horse Awards, including Best Director and Best Feature Film.

In 2009, Chan produced Teddy Chen's Bodyguards and Assassins, which has garnered a spectacular RMB300 million in China box office alone, accumulating over US$50 million Asia-wide. It has scored a stunning 8 awards in the Hong Kong Film Awards, including Best Film, Best Director, Best Supporting Actor (Nicholas Tse, Best Action Choreography, among others. It also won Best Actor awards for Wang Xueqi in the Asian Film Awards and the HK Film Critics Society Awards, adding up to an impressive 146 awards out of 231 nominations for Chan's awards track record.

Chan has a daughter (born in 2006) with Hong Kong actress Sandra Ng, although the two have no intention of getting married.
(Source: Wikipedia)