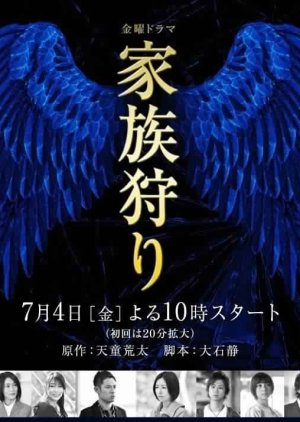 Hizaki Yuko is a child psychologist working at the Childcare Center. At work, her heart goes out to the children at the center. At home, she has to endure the grumblings of her mother, Tamiko, who is the sole caregiver of Seitaro, Yuko's father suffering from Alzheimer's. With the suffering of the children at work and the complaints of her mother at home, Yuko can hardly get any rest and peace of mind. Sudo Shunsuke is a teaching art at a high school, but the days just flow by aimlessly for him. He dreams of creating a masterpiece and have his talent recognized by the world. His girlfriend, Kiyooka Miho, is pressuring him to get married, but Shunsuke is reluctant to do so. One day, a crime takes place in Shunsuke's neighbor's apartment. The police had deemed it a murder-suicide, based on the suicide note left behind by the son, claiming that he had killed his grandfather and parents. Detective Mamihara Koki feels there is more to it, as the brutality of the parents' murder seems uncharacteristic of the child perpetrator. He decides to pursue the case further, and soon, Shunsuke and Yuko are unwittingly pulled into the investigations. Edit Translation 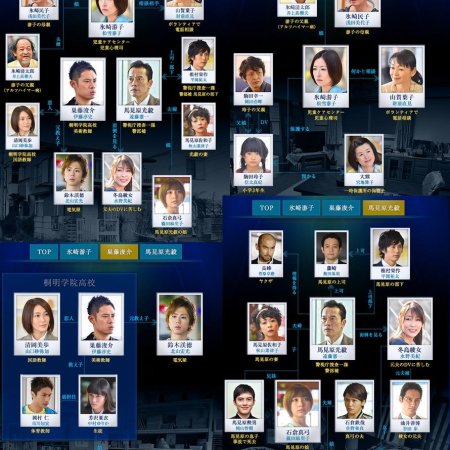 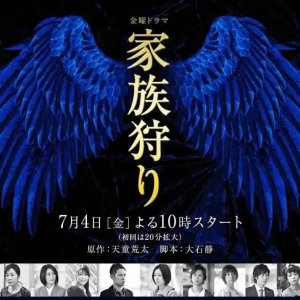 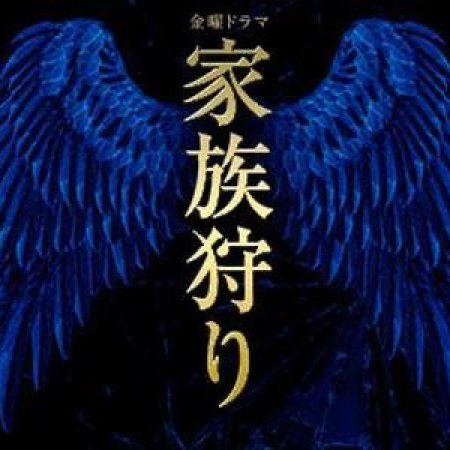 There are no perfect families. Even with the same blood coursing through our veins, we all remain human; living in close quarters, we’re bound to have differences. Disagreements will accompany warmth and support, affection and acceptance mix with disappointment and misunderstanding. But when we have nowhere else to go, we can always return home (right?) Yet like any other relationship might fail, so may a family—romantic as it sounds that familial bonds are unbreakable. So much is stacked against this most important of relationships, though the ideal is that word again: “unbreakable.” Outside external problems like financial concerns, personal failings and instances of abuse and neglect constitute the most daunting. You see, while there are no perfect families, there *are* many unhappy ones.

Kazokugari (literally “Family Hunting”) takes this idea to ask some harsh questions. At its very worst, can a dysfunctional family be saved? If things appear hopeless, should the entire institution of family be torn down—even if that necessitates murder? When we’re hurting too much, is it better to live or die (and do we have the right to make that decision for others)? To answer, this drama uses three intertwining stories whose themes and importance overlap. Our main characters combat their own demons separately, but each is being suffocated by family issues and lack of direction or comfort. What links the three are the family suicides (murders?) which haunt their city; as they sink deeper into the mystery, they’re drawn closer together for better or worse. Of these, two combine beautifully (Hizaki and Sudo) though alone Hizaki was far and away the most interesting character in the series. The third, Detective Mamihara, ends up feeling the least focused and connected despite his story’s thematic importance. He’s ultimately one of those characters that might have worked better as a supporting character.

But the brilliant, atypical nature of Kazokugari begins with *how* it tells the story: this drama is a strange chimera of the horror and family genres. Touching scenes often find themselves sandwiched between ones that might seem more at home in a slasher flick. Like in Karamazov no Kyodai, isolated disturbing imagery is used to transition scenes (for instance, perfect fruit that turns to reveal rot—just before the mold is sliced away by an unseen hand). Viewers may find themselves warmed to the core, then frightened off the edge of their seats. My only issue would be that sometimes these elements are pushed too far and muddy the intent, which is to create an uncanny atmosphere. When things worked out it was great, but sometimes my reaction was “Huh,” rather than “EEK!”

Just like her character Hizaki, Matsuyuki Yasuko hooked my interest from the first. This is my third encounter with this talented actress, and I’ve come to realize she often stars in excellent projects. That suits her, since her performances are just as exemplary—and she maintains her standard here. Her vivid expressions betray the character’s feelings to the core, whether it’s an insight to her hollow pain or a rare moment of peace. Ito Atsushi, whom I have great affection for, absolutely pales in comparison. But while he might not have the charisma of his character's favorite Basquiat, he holds his own in terms of everyman relatability and likability. Of the rest of the cast, I wanted to point out as notable Kitayama Hiromitsu. His Keitoku was excellent and much-needed comic relief that somehow fits right in despite the dark themes of the drama.

Music wins a high score for two reasons. First, the orchestrations are perfect mood-setters. No scene would have half as much impact without them, whether creepy or tender. My favorite example will be the inclusion of tragic Ozaki Yutaka’s heart-wrenching “I Love You.” It’s used devastatingly in many scenes; if one knows the lyrics, it enriches the context. There’s also the lovely theme (“Shout” by androp) which ends each episode with a suitable bittersweet feel. Secondly, the sound effects in this series are just genius. These offset dialogue and actions with fabulous timing, giving them new atmosphere—whether it’s a painful sentence being repeated in horrifying tones or some cruel violin riff.

Please be forewarned this drama includes depictions of domestic abuse by and against children, blood, and disturbing imagery. Sensitive viewers may find some parts unpalatable.

Completed
Pixiemage7
5 people found this review helpful
Other reviews by this user
0
Mar 12, 2015
10 of 10 episodes seen
Completed 0
Overall 9.0
Story 8.5
Acting/Cast 7.5
Music 9.5
Rewatch Value 8.5
This review may contain spoilers
At first, all I knew about this drama was that it was a mystery detective type. I thought that it was like the usual Japanese detective drama that had different case in each episode. But this one was different, it is a series of cases intertwined. Also, I didn't even know the meaning of the title until the ending of the last episode. In short, I didn't have any expectation in this drama.

Let me start with the with the very first hour long episode. Everything that the director wanted to make the viewers feel, think and see was there. The mystery and creepy psychological genre that the Japan drama/anime are good at were properly executed. There were foreshadowing which made you wonder and be curious. It was a brilliantly made. Just by watching the first episode you already know where the story is going. It was a really good introduction for us audiences. I was even surprised by the ending when they made the the "family suicide" beautiful.

Now let's tackle the plot line. As I have said before it was a long interconnected cases, a chain of family suicide cases. The drama was not particular in the critical way of detectives investigating the case. It was obvious that something was up but only few of the police department realized that something doesn't make sense. There were some clues that are obvious for detectives to be suspicious about. For example, the note of the child who are part of the "family suicide", it was obvious that all of the notes were written in illegibly. What I mean is that it was written in a way that the person is in a great tension. If someone wants to write a will before you die with a lovely note saying how you love life or your family, you would not write it with much tension. (This is just an opinion and observation) There were still other things I've observed but it would make this review very long.

My point is that the focus of this drama is not solving for criminal cases but to point out the psychological events that is happening in real life that society does not understand. The very core story of this drama was to show society how people are broken and how a family setting has to do with it. After all, our values are mostly decided, for most of us, on what occurs within our family. In which it was shown in the drama. Adding the detective, mystery and creepy techniques, it made the drama even more beautiful. The plot in general was properly and orderly well though. You can see how the events turned out and was going into a direction. The script writers surely know where they were going with the story. You can see how they slowly adjusted the suspect of the audience shifted from one person to another. They slowly revealed the real one from minimal foreshadowing until they explicitly revealed everything. I commend the script writers for the story.

Next to review are the actors. I was not convinced by the acting skills for most of the actors. Don't get it wrong. I'm not saying they were bad, I just was not convinced all throughout by the way they act. Although I think I know how the director/ producer or whoever choose these actors. They choose each of them because they looked and were naturally similar to their characters. To make you understand more I'll give you an example. Mamihara-san's character was a tough detective who is violent at times but very warm to kenji-san. The actor Endo Kenichi, without knowing him well in person you would already get that kind of vibes from him - a powerful tough guy who could be violent but is looks noble at the same time. It was similar to the other actors as well. To put it simply, the director choose these actors based on who is similar to the character not just the way they act but as who they are. It was not an accidental hiring of actors to whoever is good in crying or good is making psychological creepy expressions.


A mystery psychological drama without proper music will give you less thrill but this was not the case for kazukogari. The music production was great. 'nuff said about that. Anyone who watched this drama would realize it. I like their OST song especially when t was first played at the ending of the first episode. It really created the mood.

This drama has twists and turns and for you to fully analyze and understand it you'll surely enjoy watching it again. I can see myself in the future watching it and probably realizing new things that I didn't the first time I watched it. This drama always have underlying meaning and I want to fully grasp it. The only way is to watch it again. I think I would till enjoy it probably not as much thrill compared to the first but I have to say it is still re-watchable.

If you have persistently read this review of mine up until now. Congratulations! This is the first drama review I made. For some reason I was not lazy. I'll give you the heads up: NOT EVERYONE CAN FULLY UNDERSTAND PR COMPLETELY ENJOY THIS DRAMA. Those who are veteran in watching series and who loves psychological mystery dramas would surely enjoy this. I don't want you to expect much in this drama, you might get disappointed. Just watch and enjoy the thrill ride. I hope you would also appreciate some underlying meaning in this drama that are shown subtly. I love how you can see that even though those emotionally scarred or in despair people were harming others, it was because each and everyone of them cannot stand loneliness. Their hearts was searching and seeking for something that they couldn't find. I don't want to give an example or else I might give spoilers. I hope you enjoy kazokugari. It is a pyschological thriller that you do not want to miss!!!!

New Topic
Be the first to create a discussion for Kazokugari 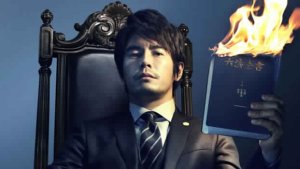