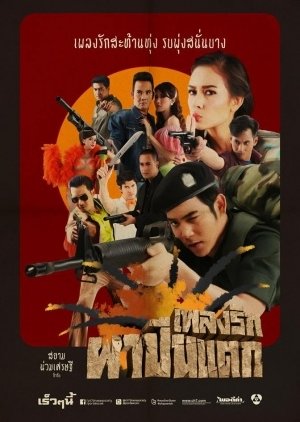 The story begins in 1969 when Shane Phananchoeng, a hot-tempered young man, goes to the border patrol. One day he returns to his homeland, Ban Pa Puen Taek (Pha Puen Taek village), but had to face bad news when he realized that Nueathong, his lover, has to marry his greatest enemy, Chart Talumphuk. He planned to take Nueathong out, but it turns out that Shane kidnapped Wanlapa in her place. The chaos followed. Edit Translation 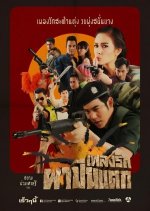 I binged watched this over a period of 3 days however i didn't really skip as much as I thought I would.

Story: the story is very important to the show, it adds to the whole theme of fighting for justice and freedom and the long road in that struggle. I liked the main couple a lot their chemistry was really palpable, not to mention some cute scenes here and there. I noticed when i started watching i skipped so many of the fight scenes but as i kept watching i skipped less and less because i started to get really interested in all aspects of the story not just the romance. One thing I really was how rape was portrayed as something the bad guys did, all the main characters were good people who joked around but never showed women as some sort of objects.

Acting/Cast: They probably couldn't have picked better cast because all of them really did their roles justice. I became a fan of Sammy Cowell since lhong ngao jun and she really shone in this role, she was a true fighter but knew when to give her hubby some love and they were so cute <3. The bad guys were also good in their acting because they weren't cartoon villains that were 100% they all had their motives and personalities which was nice.

Music: THE MUSIC WAS SO GOOD!! I'm a sucker for a few musicals here and there and this show had just the right amount of songs and good songs too. I'm pretty sure the songs were sung by the actors so it felt pretty real too! Gosh there were so many times when i rewinded just to listen to the songs again because they were so good arghh

Rewatch: The ending made me so nostalgic it felt like i had been living in Pha Phuen Tak and was leaving the town, I felt so attached which I usually only do for certain shows. might rewatch in a few months but I will definitely listen to the songs again.

Completed
FMWTTT
0 people found this review helpful
Other reviews by this user
0
Jun 11, 2020
23 of 23 episodes seen
Completed 0
Overall 8.5
Story 8.0
Acting/Cast 9.0
Music 10
Rewatch Value 7.0
This review may contain spoilers
the ost is so sweet and romantic!! first time coming across a lakorn that’s a musical too? was so adorable and bonus, this is a rom-com! the outfits were rlly cute and definitely fit the 70s theme. the chemistry btwn the leads was rlly adorable!! MF was a badass and always stood her ground, love that for her! ML and second FL had a very pitiful relationship and all throughout the drama i was just rooting for her to kill her husband!!! anyway the plot was really interesting and quite refreshing so when i googled it i saw that it was quiet popular? surprisingly though, since i didnt expect people to actually like these type of dramas, but i’m so glad!! love the mains so much

con: drama was such a draggggg, imo there weren’t enough romantic scene btwn the mains, they were just playfully arguing BUT their chemistry and ost tgt made up for it!!!! another con, i think the biggest, is that this drama portrays rape culture and objectifies women. idk how to feel about it though since the drama took place in the 70s?? and i guess it makes sense since it was different back then also the amount of FIGHTING lmaoo i think this drama was literally 90% fighting 10% romance but then AGAIN, i realised the plot evolves around the conflict in PPT so it makes sense in a way, just disappointed they included too much unnecessary fighting scenes. literally shane could be breathing and chart would pull up and try to kill him?also hated how the second mains got their own love story fjfjf it was so irrelevant and took up if not more than the main’s? did not like the second ML his character was assss, other than that i defs recommend this drama!!!!

second reminder: the OST is so beautiful i keep listening to it???so pure and sweet