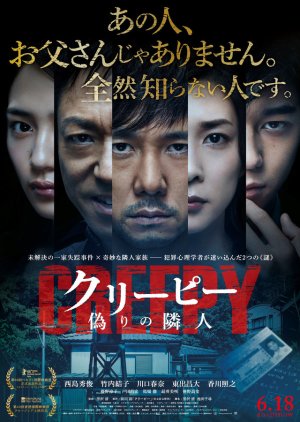 Completed
Bforbrigitta
4 people found this review helpful
Other reviews by this user
1
May 3, 2017
Completed 1
Overall 8.0
Story 8.5
Acting/Cast 9.5
Music 9.0
Rewatch Value 7.0
This review may contain spoilers
(spoiler parts of this review will be posted as a comment below)

It's not a plot we've never seen before but once you get to the end you realise that it's executed in a way that feels fresh and doesn't follow the usual introduction-climax-final showdown-resolution formula that's often rehashed in this kind of film. There were a few things that I wish were expanded on and explained further but the film progressed in a way that made sense and I found the ending to be well-executed and satisfying enough. I think it's worth watching as long as you're not deadset on looking for fast action-packed sequences.

It employs the trademark Japanese-style filmography in that sequences are slow and drawn out with ample silences filling in gaps. In my opinion though, this style aids in building up the suspense and your own sense of uneasiness while it slowly unravels details that make for several "oh shit" moments that begin to crawl under your skin. For this, I think the lack of music is employed as an audial effect in itself, with minimal atmospheric background noise adding to the sense of discomfort.

The cast was brilliant, all veteran actors who know exactly what they're doing and are clear with their characters' intentions. Even the younger actresses and the other neighbour were great in portraying strange and unsociable people. I wish the writing had added a little more depth and dimension to Takeuchi's character other than "standard housewife", but she was great with that she was given.

Because it's not particularly frustrating nor is it too emotionally draining, I'd probably watch it again because I found it the right amount of tense, gripping and enjoyable to follow along with, and I would probably recommend it to others.

Completed
mamamIYA
2 people found this review helpful
Other reviews by this user
0
Dec 29, 2016
Completed 0
Overall 7.5
Story 8.5
Acting/Cast 9.0
Music 3.0
Rewatch Value 1.0
This movie has so much potential. The plot seems to be interesting and yes, they did stick to it but I think that there has to be another way that they could make the movie more appealing. I did enjoy watching it though because of the curiosity but really, this movie seems off. But the title itself was a great choice since it is really creepy and not that horror type of creepy but it was insane!

For the story, i'm going to give it an 8.5. I like the plot but the way they extend it was not great! I'm super resentful about it.

The actors did a great job executing their characters well especially Nishino-san (Kagawa Teruyuki). He makes his sinister character seems natural. They did really great and I couldnt ask for other actors to play their roles.

Music? There's nothing special about in fact, I havent even heard a music I think haha. It's all like a daily life basis which they wouldnt stress out the music.

And nope! I dont think I would watch it again. I wouldnt even dare to see Kagawa's character ever again. Such a psychopath.

There was no excessive blood or gore. The acting was very good. There is a difference in the second half in terms of the direction it takes. I am very good at guessing the end, and while I had an idea of two ways that it might end, because of some of the events that occur in the final 10 minutes I thought I had it figured it out...but I didn't. And that I liked. I liked the end too. It was very satisfying.

I also liked the portrayal of the villain in addition to his interactions with the neighbors. I enjoyed the way the story slowly opened up, and I thought it was interesting how the film in many ways was about the male lead coming into his own again.

What I disliked:
I thought there were a few strange inconsistencies in the story. One of the points the drama makes is the fact that the detective is very smart and is very educated in police matters, including the FBI in the states and their profiling techniques. That said, I thought it was strange that the police department never made a note of him as a consultant, which you can do. He was working with another detective on the side, but because of safety, typically you want to document everything, including where you visit if you are on the job, or following a lead, for safety issues. Some people don't do this in the show, and that made no sense to me.

What was odd:
I found it difficult to understand the detectives wife. I truly could not understand how her opinion of the neighbor seemed to change given how clearly bizarre and weird his behavior was. He did a lot of little things that makes you want to stay away from him, like invading your personal space and making weird requests.

Overall:
I would re-watch it and thought it was interesting, especially because of the acting ands script and the fact that there was hardly any blood or violence (although be warned, people die)(and there is no showing of torture or anything like that, which I like). it was a very psychological film.

Completed
Senpai
0 people found this review helpful
Other reviews by this user
0
Jun 12, 2017
Completed 0
Overall 6.5
Story 6.0
Acting/Cast 7.0
Music 7.0
Rewatch Value 6.0
A murder the original literary work.
Kiyoshi Kurosawa failed to faithfully follow Yukata Maekawa's award-winning book. Faithful adaptation of literature in cinema is not synonymous with quality.
A very bad, blatant prologue, this beginning delineates the lifeless atmosphere of the horror genre portrayed in the film, where two characters, Koichi Takakura in the role of Hidetoshi Nishijima is the respected detective attacked by a psychopath in the introduction of the film, now a faltering university professor Who starts investigating for himself an unresolved old crime; And his wife, Yasuko in the role of Yuko Takeuchi, who feels increasingly abandoned by her husband as he approaches Mr. Nishino in the role of Teruyuki Kagawa, a neighbor who attracts her the more he frightened her ...
The film becomes quite predictable halfway, and confusing, it's almost as if the movie had gone nowhere and stayed for a brief visit because it had nothing more to say.
Long, repetitive, it gets very open, and has characters whose motives are so confusing and confusing ...
If Mio was so worried about her mother's fate, why did not she go to the police?
Why was the former detective's wife unwilling to tell her husband about the psychopath who hooked her with drugs? When she had the opportunity, why did not Mio kill the psychopath?
Cinematography, scenarios and special effects were a show apart, in Kiyoshi Kurosawa's conception, fantasy is essential for making genre films. He even abused the insane, cruel, unobtrusive psychopath who lives in a real slaughterhouse and who seems untouchable. And yet, it smashes the viewer's nerves. By forging the absurd for maximum visual and psychological effect. By using the inexplicable way to turn "Creepy" into a truly scary, chilling experience in a horror lesson with blood techniques and surreal mutilations.
Generally "Creepy" instead of representing a metaphysical evil, they relate for the sake of an earthly reflection of the original book of Maekawa, "our inattention to those around us, whether it be a sad spouse or a dark neighborhood colleague ". That is, a very human issue. The unknown is based on what blinds you, what moves you; But it does establish itself in the formal and narrative resolutions of the filmmaker, who radicalizes the mystery as it dilutes the realism of the original plot.

Completed
arashinta
0 people found this review helpful
Other reviews by this user
0
Nov 16, 2019
Completed 0
Overall 8.5
Story 8.0
Acting/Cast 9.0
Music 8.0
Rewatch Value 8.0
This review may contain spoilers
Good movie. This movie is one type of film that makes you have to think, even after the movie has long ended. Although this movie runs quite slowly, the story is quite interesting, because there are many mysteries that must be solved and also some pieces of the story that we have to find the connection. There are no twisted plots, but the ending of the story is difficult to guess (at least for me). But after the movie has long ended, I still wonder what is the drug that being injected to all the victim? What is the motive? Too bad they never reveal it.
Was this review helpful to you?