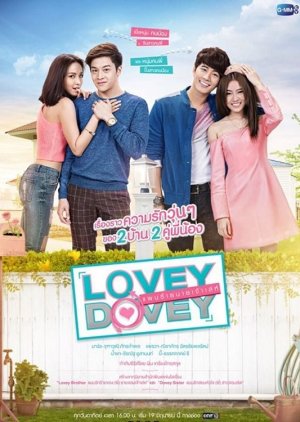 When two brothers fall for two sisters, they quickly realize the age differences between them are too big to ignore. (Source: Netflix) Edit Translation 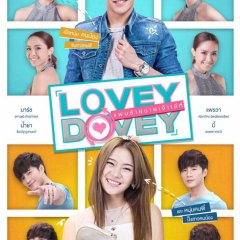 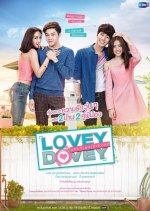 Completed
miss_kayti
7 people found this review helpful
Other reviews by this user
0
Jul 10, 2017
20 of 20 episodes seen
Completed 0
Overall 7.0
Story 6.0
Acting/Cast 8.0
Music 7.5
Rewatch Value 5.5
So, we already know that it's about two couples. You've got the older guy Kong (played by Bie) with the younger girl Khaiwan (played by Pearwah), and the younger guy Dao (March) with the older woman Kook (Namcha). The show is VERY self-aware about the age difference and about how creepy it is that a 17/18 year old boy fell in love with a 10 year old girl. The characters in the show fully acknowledge that it's strange. You have to accept that and move on otherwise you'll never get through the first episode.

There are some very very cute scenes and some great kisses. The younger guy/older girl couple are frustrating a lot of the time (well, it's mostly her) but when they're not being frustrating, they are so watchable, so adorable, so natural, so giffable. The other couple have some sweet scenes but they have a very different type of chemistry than the other pair do, namely due to her age.

The editing could be a bit choppy; sometimes I felt like a whole bunch of scenes had ended up on the cutting room floor but that was mostly in the first 6 or so episodes. It felt smoother after that.

I think the cast did a great job for the most part. Again, it was March and Namcha that carried the show, and then the others came in behind them. Bie has room for improvement but he has the ability to make you forget that with his smile. Pearwah is freaking adorable. I really liked Dao's friend Dew (Tay), he was a really lovely secondary character, necessary but not, at the same time.

It's rewatchable but I think in a rewatch, you'd fast forward all of the non-cute scenes. Skip the PPL, skip the school scenes, skip the 'Kook being annoying or stupid' scenes, skip the ex-girlfriend. If I was rewatching, I'd probably just watch all of March's scenes plus some of Bie's when he's smiling.

Completed
Cho Na
1 people found this review helpful
Other reviews by this user
0
Sep 23, 2019
20 of 20 episodes seen
Completed 0
Overall 7.0
Story 6.5
Acting/Cast 8.5
Music 6.5
Rewatch Value 5.0
This review may contain spoilers
While relationship with wide age gap may not a big deal in some age range and certain culture, may become a hindrance in younger age range and other culture. To my calculation, the adult characters may be: Kong and Kook are both 26, Dao is 22, and Khai is 18. In this drama it seems like the female characters have difficulties getting into a relationship with guys with wide age gaps. Some viewers felt somewhat creepy that an 18 year old player boy can fall for a 10 year old girl, especially since in the drama Khai is not drop dead gorgeous both in her younger or older age. I feel mainly drama plot, cast, acting look more exciting when it comes to Dao and Kook's story, because Dao is romantic and crafty, while Kook is "pretty and bitchy" (Dao's saying, English sub) making the ups and downs in their relationship entertain enough to watch, played very well by Chutavuth Pattarakampol/March and Sheranut Yusananda/Namcha. They both have a great chemistry. In the other hand, it's not so easy for Hsu Thassapak/Bie to create that kind of chemistry with Nichaphat Chatchaipholrat/Pearwah if he is surrounded by a bunch of teenagers running around with school uniforms. Bad editing and choppy screenwriting don't help much, making this 2 relationship stories even more complicated with unnecessary pairings of the rest of Khai's friends. Therefore, though this romcom is light and fluffy, I won't watch again as I will skip lots of scenes and only leave scenes of Dao and Kook, than the drama will be cut to less than a half.