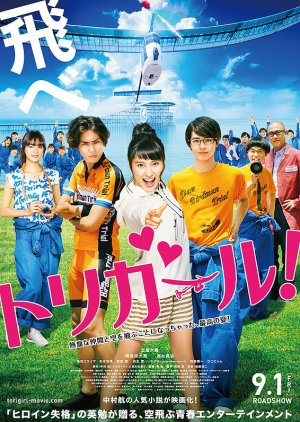 Toriyama Yukina enters a university of science after prepping for one year for her entrance exam. At first, she is shocked by the atmosphere at her school. She becomes attracted to senior student Kei. Due to Kei, Yukina joins the “human powered flight” club. The club targets the "Tori Ningen Contest." Yukina wants to partner with Kei to fly in the sky, but she is partnered with Sakaba whom she does not like. Edit Translation 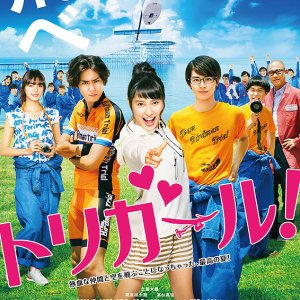 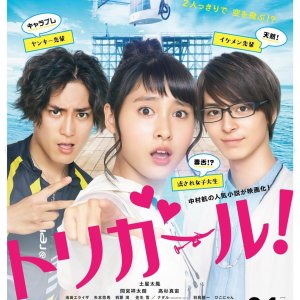 Completed
FreeWhirpool
12 people found this review helpful
Other reviews by this user
0
Mar 13, 2018
Completed 0
Overall 8.5
Story 8.5
Acting/Cast 9.0
Music 7.5
Rewatch Value 8.5
If someone told me that Tsuchiya Tao and Mamiya Shotaro would make such a good couple before seeing this movie, I wouldn't believe them. The characters they usually choose in dramas and movies are so different from each other, I couldn't even imagine them being in any way compatible. The description didn't hint at anything different, either; recycled, stereotypical J-love triangle with a female character that goes "ehhhhhhh~~" every 2 seconds. But what we got was so, so, so much better.

The first 15 or so minutes of the movie is nothing out the ordinary and is exactly as the synopsis says it is. Tsuchiya Tao so far, as Yukina, fits the cast of Every Japanese Shoujo Heroine™. The REAL fun of the movie starts when Yukina and Kei meet Sakaba (Mamiya Shotaro's character) and try convincing him to be a pilot in the club again. What ensues is a hilarious scream-off between Yukina and Sakaba, owing to their headstrong personalities and loud voices, which is both extremely cute and displays the incredible chemistry between the two characters that never goes away throughout the duration of the movie.

That said, don't watch this expecting a cute romance; there isn't one. One-sided, sure (I won't say who), but definitely nobody becomes a couple at the end of the movie. I was a little disappointed at first, naturally, but in figured that in the grand scheme of things, it doesn't really matter- it didn't matter to the two people involved, anyway. Yet, I hope there is a Part 2 so that my hopeful little heart is in peace.

Tl;dr: If you're a fan of cute comedy and amazing chemistry (that is only sometimes romantic- emphasis on SOMETIMES), you will love this movie just as much as I did.

Completed
heart-ereki
8 people found this review helpful
Other reviews by this user
0
Mar 13, 2018
Completed 0
Overall 10
Story 10
Acting/Cast 10
Music 10
Rewatch Value 10
This movie is a total perfect 10! I was pretty excited for this because I’m a huge fan of Tao, but I didn't think it would be THIS good! The synopsis and poster just don't do this fantastic movie justice! This movie takes a little while to get going, but then it really “takes off” (flying puns galore) and you'll never feel bored. I was smiling and laughing the whole way through!

I had no real expectations for the story, but was a little hesitant about the genre. I’m not really into sports themed movies because I often find they’re way too bogged down with cheesy tropes. If you’re like me, never fear! This movie strikes a perfect balance between sports and story, and I was completely glued to the screen near the end, holding my breath with excitement. Human-powered aircraft is actually really cool and the movie makes it look very thrilling!

The best thing about this movie is definitely the electric chemistry between Yukina (Tsuchiya Tao) and Sakaba (Mamiya Shotaro). They’re both so hot-headed that it felt like a genuine love/hate relationship and I was laughing my head off at their crazy attempts to outdo each other. Their bickering and yelling contrasted so well with their quietly beautiful friendship. It’s not a romance movie, but you will fall in love this couple! Needless to say I definitely fell a little in love with Mamiya Shotaro. This movie brought a really hilarious ensemble cast together and they made everything work. The comedy is top notch!

The music was also awesome! The periodic use of “secret base" was hilarious. I love that song and they made it both a comedic choice and a more emotional choice. I loved it!

Rewatch value for this one is definitely high. I would probably rewatch it tonight! Definitely don’t miss this movie!!