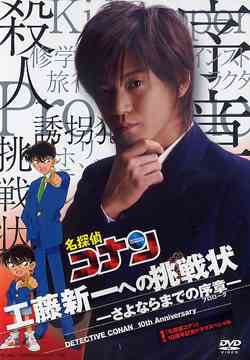 I felt that it quite doesn't have the suspense whenever there's kidnapping cases. It is shallow and predictable. It isn't as mysterious as it should be. It isn't as exciting to watch [as it is in the anime]. But I liked how wrong I was when I thought of how Shinichi would deal with the last problem. It kind of surprised me.

While I was watching this, I thought that Oguri Shun was charming. His acting was good though he doesn't have the perkiness the Shinichi of the anime has. Aside from him, the other one I consider to be memorable was the actor of Mouri Kogoro who I thought portrayed him well. His facial expressions and voice were amusing. And he resembles him, too!

There are some of the music of the anime used and it's nice to hear them here. It gives the feels.

I don't think I'll re-watch this soon, though. If I want to see Shinichi, I'd rather watch the anime or catch up and read the manga.

Anyway, it's passable to watch whenever you don't have anything to watch. It's also nice to watch if you're an avid fan of the anime/manga series because you'll get to see the characters alive and because you're an avid fan; you never miss out anything related to your loved series! However, this may bore some. Don't watch this if you're looking for a mysterious one that will make you think hard.

Completed
Turquoisesparkle
2 people found this review helpful
Other reviews by this user
0
Oct 1, 2012
1 of 1 episodes seen
Completed 0
Overall 9.0
Story 9.0
Acting/Cast 9.0
Music 8.0
Rewatch Value 9.0
This is a wonderful live action version, I have to be honest, I haven't seen the detective Conan anime or read the manga, but after watching this I feel like I'm missing out! it kinda reminds me of inspector gadget because it's a bit of fun, I'm just sad it's so short! The cast I think were brilliant and the story was pretty good as far as mystery detective stories go, which I really enjoyed.
Was this review helpful to you?

Completed
mrspartypoison
0 people found this review helpful
Other reviews by this user
0
Mar 24, 2019
1 of 1 episodes seen
Completed 0
Overall 6.5
Story 7.0
Acting/Cast 6.5
Music 10
Rewatch Value 3.0
It was entertaining, I guess. It's not great (especially if like me you've watched the anime/read the manga) but I wouldn't say it's the worst adaptation ever. It just felt as if there was something off the whole time, like something wasn't right. Also, I'm more of murder cases than kidnapping so I guess that's another reason for me not enjoying it as much lol. I have to say though that I'm so glad they decided to go with Shinichi before he became Conan, otherwise it could've been horrible lol. I really liked having a AND THIS MIGHT BE A MINOR SPOILER OF THE END BUT NOT REALLY SINCE IT HAS NOTHING TO DO WITH THE ACTUAL PLOT OF THIS EPISODE sneak peek at the end of Ran and Shinichi as well as the detective kids. END OF POSSIBLE SPOILER.

Overall, I'd say that if you haven't watched the anime/read the manga you could give this a try and then go watch the anime/read the manga. If you have watched/read Detective Conan and don't know whether you should watch this or not... unless you love this series with a burning passion maybe you can skip it and watch something else since it has nothing to do with the actual plot.