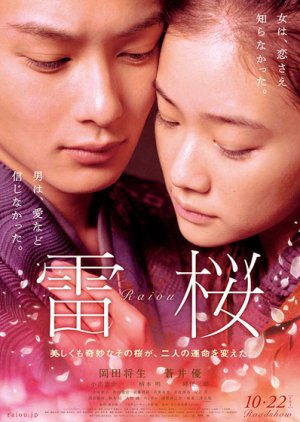 Set during the Edo Period, a young man from a noble family meets a young woman under a special tree called "Raiou" (the tree was struck by lightning at one time with the broken part eventually sprouting out cherry blossoms). The young woman lived freely in the mountains after she was abducted as a young child. The couple soon fall in love under the Raiou tree, but become acutely aware of their different social positions & the ramifications it has on their relationship. Narimichi (Okada Masaki), born to the high ranking Tokugawa family, spends his sheltered days bored and lonely. One night, the family retainer, Seta Sukejiro (Koide Keisuke) tells Narimichi of a story involving Tenku, a monster who resides in the mountains near his hometown of Setamura. Narimichi is fascinated by the tale and heads off to Setamura with Seta Sukejiro. Rai (Aoi Yu) lives on the mountains near Setamura. She lives with her foster father Riemon (Tokito Saburo). 20 years ago Riemon refused orders to kill young Rai over disputes of water rights and since then has raised her as his own child. Rie often threatens villagers who come into the mountains to not damage the mountains. On the way to Setamura, Narimichi decides to ride alone into the mountains to where the rumored Tenku lives. There he comes across Rai. Narimichi, now back in Setamura, tells Sukejiro of a female Tenku he came across in the mountains. Sukejiro responds that he is sure the woman he saw is his younger sister Yu - who was kidnapped 20 years ago. Rie, who was told by her foster father to go live with her birth family, then comes to live in the village of Setamura as Yu. Narimichi and Yu meet once again near the lightning tree. Yu, having grown up alone in the mountains, knows nothing of the class system & treats Narimichi in a frank, honest way. They are both attracted to each other... Edit Translation 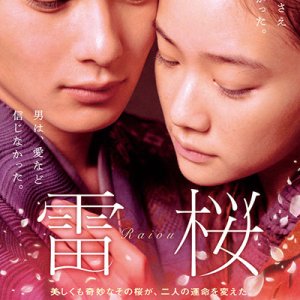 Completed
OldAnimeLady
2 people found this review helpful
Other reviews by this user
4
Jul 30, 2018
Completed 4
Overall 8.5
Story 7.5
Acting/Cast 10
Music 8.0
Rewatch Value 7.0
I watched this movie because for the next month I will be focusing on historical dramas and movies. What drew me to this was possible romance without much politics. What made me nervous..The comparison to Romeo and Juliet(we all know how that turned out).

This is the second Aoi Yu work I have seen(the other being Osen) and she can really sell a strong woman who does not lose her femininity in the process. Okada Masaki whom I have seen in several things before this(Mirai Niki, Taira no Kiyomori, Ito-kun A-E) did excellent with his part. While a lot of the parts are predictable, the ride was still enjoyable. I will be adding this to my recommends lists.

The scenery was beautiful with only a few locations the world still felt big and wide open. Overall I give this an 8 rating .

Completed
ZDorama
1 people found this review helpful
Other reviews by this user
0
Nov 24, 2016
Completed 0
Overall 10
Story 9.0
Acting/Cast 10
Music 9.0
Rewatch Value 10
Watched 29 Jan, 2014
Man, I have just finished watching the most awesomest movie! Years ago I saw a super fun episode of Kuwazu Girai featuring Okada Masaki and one of my very, very favorite actresses, Aoi Yu, who were at the time promoting a movie called Raiou (The Lightning Tree) and the couple was so much fun and seemed to get along so well that when I found the movie up for grabs, I downloaded it right away!

First thing I gotta say is MAN, this movie is NOTHING like what the synopses I’d been reading had indicated- far from a typical romance separation by class, Raiou took that basic premise and took a MAJOR left turn with it, turning the movie into one featuring not only romance but Action, Adventure, and Human Drama- Beyond the tale of a high class young nobleman falling in love with a peasant girl, we’ve got the male lead Narimichi (Okada Masaki) as a prince plagued by illnesses that not only make his sickly but prone to bouts of delirium as well, meeting Rai (Aoi Yu), a gruff wild-child raised in the mountains by the assassins who stole her away from her family when she was just a baby. Put these two together and you’ve got a whole new tale on an old tale!

And the second and probably most important thing about Raiou is the awesome acting, ESPECIALLY on the part of Aoi Yu, my GOSH can this chick ACT!!!! MAN, her scenes were always so gripping, emotional and intense- I have to say that by the end of the movie, I was just DRAINED! Man, NOBODY sells a character better than her, NOBODY! What will this girl do NEXT?!