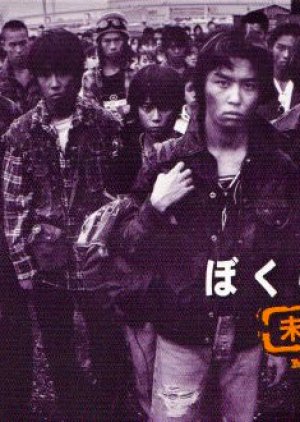 After a devastating earthquake strikes Makuhara the northern part of Chiba, 18 year-old Yamato, leaves to Makuhara to find his friend Kiichi who lives in the area. On his way Yamato meets Takeru, who is also traveling to Makuhara as a volunteer in the relief effort. However, when the two arrive at Makuhara they are shocked to find that the city, which is under government lock down, is intact and is managed solely by children after a mysterious virus results in the deaths of all the adults. Forced to survive on their own, the child leaders must save the city and also fight the government, which tries to hide the truth. [Dramawiki] Edit Translation 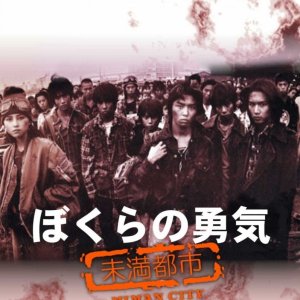 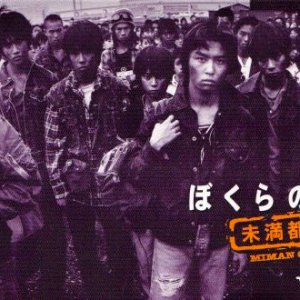 Completed
neonlibrarian
21 people found this review helpful
Other reviews by this user
0
Jun 23, 2013
10 of 10 episodes seen
Completed 0
Overall 10
Story 10
Acting/Cast 9.0
Music 10
Rewatch Value 10
Bokura no Yuuki is an incredibly compelling, complicated, somewhat eerie drama with an all-star cast (largely before they were stars).

Two teens (played by the Kinki Kids) sneak into a city they believe to be under lock-down after a massive earthquake. While there, they find there was no earthquake. The entire city has been quarantined by the government, due to a mysterious illness that has infected and killed every adult. Now that they've entered, they're trapped.

The children of this city, trapped in what amounts to post-apocalyptic circumstances, struggle to survive and war over limited resources and territory. The few remaining teens attempt to establish order and negotiate with the government that has abandoned them.

Bokura no Yuuki is an amazing survival tale with a level of intensity rarely seen in prime-time dramas. The story is very well constructed and paced. It is suspenseful, but also takes the time to develop each character and relationship.

The cast is mostly children, but they do a beautiful job portraying the many emotions in this drama: mourning, emotional upheaval, frustration, betrayal, childlike naivety and hope...

I can't say enough good things about this drama, although I will provide one warning. The first episode is misleading because the old-fashioned technology feels very "dated". The first episode turned me off the series initially, but when I pushed through to the second episode, I was thoroughly hooked. It is now among my very favorite dramas.

As an aside, this is MatsuJun's first acting role! At age 13/14, he's ridiculously adorable.

Completed
mecchaumai
1 people found this review helpful
Other reviews by this user
0
Jul 15, 2018
10 of 10 episodes seen
Completed 0
Overall 10
Story 10
Acting/Cast 9.5
Music 9.5
Rewatch Value 10
This review may contain spoilers
This is my all time favourite drama. I've just rewatched it, I gave it a 10 the first time, and I still think it deserves a 10 (one of the only dramas I've ever given a 10).

Don't let the video quality put you off watching it, you will learn to ignore it once you get drawn in... and I swear it's worth it.

Even though Bokura no Yuuki doesn't exactly fall into these categories, I recommend to fans of topics such as survival games, mystery and corruption, as it has a similar feel, and will be something different to watch. On the flip side, I would recommend to fans of friendship dramas, as friendship is touched on (don't let the above put you off, or vice versa).

The plot is cleverly played out, both creating an air of mystery around the cause of [insert a slight spoiler] and whether things will ever change.

Instead of focusing on one particular character, the drama tells the story of a small group of characters, and their relationships* (*not romantic), therefore giving variety, and also making the viewer care for more than one person.

I like the air of urgency that the plot gives, which urges the viewer to watch *just one more* episode, to see whether things will pan out. It is completely possible (and I have done it at least twice) to watch the whole thing in one sitting.

It's different from the normal school/workplace/general city setting which is great if you are looking for something refreshing (from the norm).

The only complaint I have is 10 episodes is too short and I wanted to know more about [insert spoiler ;)]...

I'm yet to rewatch the 2017 SP, which I will hopefully find tonight.

Just watch it if you're looking for something new!