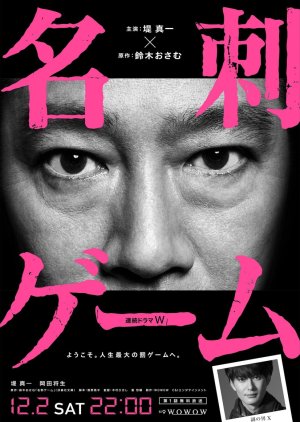 Kanda (Shinichi Tsutsumi) is a producer of a popular quiz program. When he wakes up, he finds himself wearing a mysterious necklace and there a lot of business cards scattered on the floor. His daughter daughter (Karen Otomo) is there and wearing the same necklace. Kanda and his daughter are locked up in a secret room. Mysterious man X (Masaki Okada) appears in front of Kanda. X suggests to him the “Meishi Game” ("Business Card Game") with a 2 hour time limit. The rule of the game is for Kanda to find the business cards he received and return them to the owner of the business, but, if Kanda makes a mistake, his daughter will blow up. Kanda accepts the challenge to save his daughter and there is also a hidden secret. Edit Translation 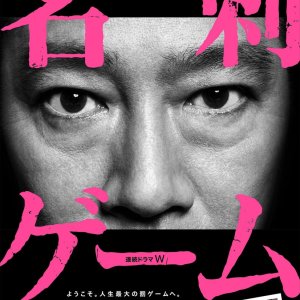 Important note : this drama is definitely NOT   for teens or UNDER 18 VIEWERS  , since it has few disturbing  scenes, which made me sad seeing them and since its a adult theme drama so, u should expect that much at least.... haha


Theme :  this will be a serious /dark theme drama about VARIETY SHOW industries , which is was and  quite interesting to watch also , there are some truth also shown in this drama like,  how idols/ celebrities do the things no matter what it takes to survive in the industry, even if its against their don't like to do it.
they focused the character of a producer and the people around him  , since  a producer plays a very important role the entertainment industry .

episode 1 and 2 was interesting to watch , as they revealing the secrets one by one
episode 3 was also going pretty good, BUT  then the ending scene though ...i got goosebumps hahaha #TWIST .
episode 4 : this episode was bring all the pieces together from last 3 episodes( obviously,since its the last episode LOL )
and the biggest highlight was the ending , i was DUMBFOUNDED , i got confused for a bit, but it was worth watching .#GRAND TWIST

MY  THOUGHTS : i don't know whether i should like this drama or hate it but i think i liked it..lol idk....guys what do u guys think about this drama ?

Completed
mecchaumai
1 people found this review helpful
Other reviews by this user
0
Aug 8, 2018
4 of 4 episodes seen
Completed 0
Overall 5.5
Story 5.5
Acting/Cast 7.5
Music 7.0
Rewatch Value 1.0
This is my chosen genre and I watch a lot of similar shows. If that's not you then my comments may not matter as much.

To me, this show just felt kinda unoriginal. I don't mean the actual 'game' side of it, although there were parts of that that were similar to shows that I've watched before, but in terms of plot progression and character motives etc, I felt like I was watching just an extension on things that I've watched in the past. The Quiz Show definitely comes to mind, and I'd pick TQS any day of the week over this. Not that you can't enjoy both, of course, but with the amount that I watch from the genre, I was hoping for something a little new. I felt for the most part it was predictable, but again it may be the amount that I watch, and the fact I'm a little cynical.

I liked a few of the cast, and others I didn't, you win some you lose some. I think Tsutsumi Shinichi & Okada Masaki are both great in this.... but they couldn't save it.

Meh, is the word that comes to mind when I think about what I just watched. I was watching for the sake of watching it.

For the plot progression they show what happened in the past, which works well. However I often felt like I was watching a completely different drama, and it was a little disjointed at times when they went into a bit too much detail. I think it would have worked a lot better as a movie.

I will not be watching this again as there are better shows out there. I try not to compare too much when I'm watching stuff but this one just rang too close to other things that I've watched. It was just okay. 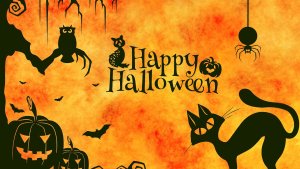