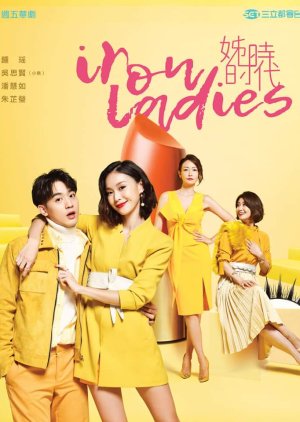 Completed
dramaguzzler
5 people found this review helpful
Other reviews by this user
0
May 10, 2018
13 of 13 episodes seen
Completed 0
Overall 9.5
Story 9.5
Acting/Cast 9.5
Music 5.0
Rewatch Value 8.0
Never have I ever watched a Taiwanese show like this.
There are dramas like “Fated to Love You” which totally makes me get into the shoes of the heroine and hate the hero on her behalf(‘cause she’s being too frustratingly docile) while being completely emotionally invested and trying to binge watch, a truly overdramatic drama. Then there are dramas like “Attention! Love” which is like bubble gum, starts off with colourful ambience then progresses to become so tasteless and draggy that you want to spit it out. Iron ladies is neither of them. It’s in the league of "I Need Love" KDrama series and "Sex and The City" in terms of showing strong female leads who don’t act all prude and are not shy to express their sexuality. This show is a lot closer to reality.

The three leading ladies are true to the essence of Iron Ladies. They are beautiful, strong, sexy, independent career women who are also managing their a little to a lot messy personal lives. Their approach towards dealing with the issues of their career and love, the compromises they chose to make and not make, their relationship with the men in their lives, and while doing all these how they discover their uncharted facets and become more of themselves and grow up, is the story of this drama. Though sometimes their choices and decisions made them look like desperate and pushover, that’s how life and love are, difficult, messy and sometimes ugly.

The script is so tight and the acting is so fine that I didn’t lose interest for one moment. I found the acting of this drama different than the usual Taiwanese dramas, in a good way. The characters are well written and performed. All the cast have great chemistry with each other. This is my first time watching Zhong Aviis and I am a fan. This is her first leading role and she nailed it. She and Pan Ada lived and breathed the role of iron ladies.
Wu Ben is as versatile as the makeup palletes in the show. His eyes are so expressive. When doing a photoshoot scene in the show his eyes were like all smart and sexy, whereas throughout the drama they were like a lost puppy. His "smitten at first sight with Ka Ting" expression was so believable.
Lan Gabriel is an amazing actor and so handsome. I found him Hollywood level amazing. His acting is so mature and poised. Everyone is great in this show. This is what I call a perfect show.

The soundtrack is ok, nothing special.

I’ll most definitely watch it again.

Completed
lovecoutureflyy
4 people found this review helpful
Other reviews by this user
1
May 14, 2018
13 of 13 episodes seen
Completed 1
Overall 7.5
Story 7.0
Acting/Cast 8.5
Music 7.0
Rewatch Value 6.5
Iron Ladies closely resembles the Korean series ‘I Need Romance’ in which they both feel like the American television show Sex in the City. You have your versions Carrie Bradshaw, Charlotte York, and Samantha Jones. The only person that is missing is Miranda Hobbes. Oh, and our male lead, Su Can played by Wu Ben is no Big. Iron Ladies is a good entertaining drama that is just missing some key ingredients in order for it to be a great drama.

Iron Ladies is about three women who work for the same company dealing with their careers as women and also juggling their love lives. Our female lead Kai Ting is a marketer and is engaged to her long-term boyfriend. Her close friend Li-Sha who works with her is our Samantha Jones who doesn’t believe in love. While, the married Ching Ching is a woman in a seemingly perfect marriage that is not-so-perfect. The story isn’t anything new but it’s very entertaining to watch. In the beginning, I was entertained by all of the ladies’ stories and their relationships, particularly the romance between Kai Ting and Su Can. That’s probably the best thing about this drama, especially if you like noona romances. But though Kai Ting and Su Can are obviously our leads, Li Sha and Ching Ching’s storylines are just as good.

The flaws with Iron Ladies is it’s pacing and story. Oddly enough, I think it suffers from a lack of story and not enough episodes, or more so, it’s ending was very abrupt and the ending could have been fleshed out more properly to have a better satisfying conclusion. The story of these girls feels like they ran their course towards the latter half and the only thing that was keeping it going was the back and forth problems with their romantic relationships. Conflict is always a good thing, but when your conflict is somewhat repetitive and drawn out because it’s clear that you have nowhere else to take these relationships, then it’s a problem. Which is a shame considering that I think all of the girls’ stories were very interesting in the first half and the middle. But despite these flaws, I still guarantee an extremely enjoyable watch.

The cast is great. I think everyone played their roles very well, but the star here is Wu Ben who plays our male lead Su Can. I think he has a natural charisma that shines every time on the screen and he brought his character to life. I look forward to seeing him in other dramas hopefully in the future. All of our ladies were great here too and I think they all played their roles well.

Overall, Iron Ladies is a lot of fun. The romances are fun and flirty. The stories of our ladies are very juicy. It makes you want to grab a glass of wine as you watch. It has a few flaws here and there, but nonetheless is an enjoyable watch and one you won’t regret.

If you like a sweet charming male lead, and fierce women at work, then you’ll enjoy or love Iron Ladies.

Completed
ladysaotome
0 people found this review helpful
Other reviews by this user
0
Sep 13, 2019
13 of 13 episodes seen
Completed 0
Overall 4.0
Story 4.0
Acting/Cast 6.5
Music 5.0
Rewatch Value 2.0
This review may contain spoilers
I really disliked this drama. It started off good and had great potential but then just nose-dived. There are basically three plots, one for each girl. The main girl's plot was mostly cute, but eventually it dragged on and devolved into her undermining the guy's masculinity and refusing to understand how he might feel that way. One friend has a decent storyline/romance involving her fear of commitment. The last girl has a horrible, long, drawn-out plot involving her cheating husband and his pregnant mistress and it was just torturous and gross! It was infuriating to watch her cling to the relationship for so long, even allowing the mistress to live with them. I will say the ending of her storyline was the most satisfying but it took much too long to get there. Basically the drama was too long and so they stretched out to romance problems which killed the story. Fabulous 30 had a similar story with 3 girls, 76 episodes instead of 13, and did it a thousand times better.

Completed
jwhites
0 people found this review helpful
Other reviews by this user
0
Jul 26, 2019
13 of 13 episodes seen
Completed 0
Overall 8.0
Story 7.0
Acting/Cast 9.0
Music 5.5
Rewatch Value 7.0
Really well-written and acted characters - I find little to fault in this one. I also found it to be interesting, funny, sad, and not as predictable as it might have been. All the female leads were well done, as were most of the male characters. My favorite episode is the last one, which has the most devious payback I think I've seen, and I loved it because it was bang on target.

There were some aspects that are uniquely culturally different from situations in most American shows, and I found that to be part of the reason it was so interesting. I appreciated that the female characters were smart, good at their jobs, sassy with each other and not irreparably emotionally damaged, which is important and real. Oh, and drawn out mopery was not a problem -- people moped and then went back to working, talking with others, and coping.