The story is centred around an uneducated street urchin Wei Xiaobao, who was born and raised in a brothel by his mother. Through a series of misadventures, he managed to make his way from the southern playground of Yangzhou to Beijing, the seat of Manchurian imperial power, and bumbling accidentally into a fateful encounter with young Kangxi Emperor. By hook or by crook, but also through a genuine concern and fierce loyalty towards Kangxi, Wei Xiaobao found himself in the greatest of confidences and a complicated friendship of one of the most eminent monarchs of Chinese history. The plot follows Wei on a rags to riches journey as he becomes embroiled in political and court intrigues, overcoming enemies for Kangxi and accomplishing amazing achievements. Along the way, Wei meets with and successfully woos seven beautiful women, climbs his way up the social ladder from brothel boy to great lord and nobleman, acquiring titles such as Imperial Emissary and Plenipotenitary, Ambassador, general and admiral - courtesy of Kangxi - as well as finding himself in positions completely at odds with the above: Green Wood Lodge Master of the Heaven and Earth Society, and White Dragon Marshal of the Mystic Dragon Cult. In the end, however, Wei Xiaobao could not reconcile his two separate lives - as an anti-Qing rebel and Kangxi's devoted courtier. He chose to offer up his own life- in return for Kangxi's munificence towards him and also as an honourable way out of the Heaven and Earth Society. Pained and aggrieved beyond words, Kangxi orders the execution of his one and only true friend. Afterwards, plagued by loss and guilt, Kangxi took a long walk along the Great Wall, asking heaven for guidance - only to be happily surprised by the appearance of Wei Xiaobao, who didn't die after all. After saving his mate's life once again, Wei bades goodbye to Kangxi, reaffirming their friendship which will, from that point onwards, remain only in the minds and memories of the two men. Edit Translation 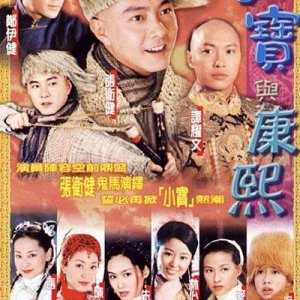 Completed
Sakurax
4 people found this review helpful
Other reviews by this user
0
Feb 16, 2012
40 of 40 episodes seen
Completed 0
Overall 9.0
Story 10
Acting/Cast 10
Music 7.0
Rewatch Value 8.0
Dicky Cheung in a period drama? What could be better?

This remake of a chinese classic is stunning in its originality and modern take on well loved characters. The story itself has been a long favourite of mine for many years, and to be honest, Wei Xiao Bao will never be the same again after you watch him portrayed by Dicky Cheung.

STORY:
A new take on an old story, filled with a few new twists that keep us oldies interested, but loyal enough to avoid offending our delicate sensibilities. Filled with deep political plots, thrilling fight scenes, as well as endearing interpersonal interaction; this drama will have you on the edge of your seat, laughing, and/or crying all at once. It will make you hold your breath, or try to catch your breath as you crack up like a maniac, and make you cry your eyes out. All in all, it has everything a good story should have.

ACTORS:
I can't begin to describe how brilliant the actors in this drama are. Every.single.one is a GEM in chinese television (except Ekin Cheng).
Never have the wives of Wei Xiao Bao been endowned with more vivacious and believable personalities before this series.
Whereas previous series have often focused on developing only one or two of the wives, this version gives each girl a wonderfully rich personality and a chance to show it off.
The actors themselves, too many to list, are all exquisitely skilled in portraying their roles and bring life to a story that has been done to death.

MUSIC:
Dicky Cheung is less known for his singing than his acting, but nobody ever said that he was bad. His opening and ending tracks for this drama are catchy and memorable, though admittedly, typically modern.

REWATCH VALUE:
Honestly, there are some moments you just have to relive. After you watch it, you'll know what I mean.

OVERALL:
It's old-school period drama at its best, with Dicky Cheung leading the cast with his amazing acting skills.
One of my all time favourites, and sure to be a favourite of many many more.

I prefer the '84 version over this version but...

I really prefer the '84 version over this version because it felt kinda fake like I could totally tell those were computer generated effects lol. It was scarier than the '84 version and less funny imo but it's still a great adaptation and definitely worth watching (minus the bad CGI).

Story: I absolutely loved this story. One of Jin Yong's best works to me. It's basically about a guy who wanders around and gets like a bunch of girls because of his cleverness and humor. He eventually becomes best friends with the king. The villain in this drama was really scary. Great story: a mix of humor, romance, suspense, and history. This drama stayed true to the novel.

Acting/Cast: DICKY CHEUNG'S ACTING SKILLS ARE ON FLEEK. It was great, I love him so much!! He rocks every role in wuxia dramas I just love his acting. The emperor is good too. And not to mention there's ATHENA CHU AND RUBY LIN. Can we just take a moment to rethink this? Ruby Lin, at the peak of her youth, is so pretty and she's cheerful in the drama. She's the princess while Athena Chu is the beautiful girl that Dicky Cheung goes all heart eyes over. There's so much chemistry between everyone and literally they're so attractive (all of them) and versatile.

Music: It's so catchy oh my ahah

Rewatch Value: Hmmm,...... Maybe, but there are more Dicky Cheung wuxia dramas when he was younger though (during his TVB days).