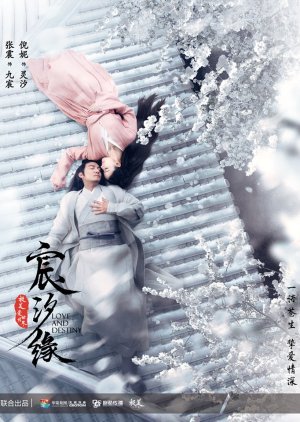 A love story between the God of War and a young maiden whose very existence can bring harm to the world. Fifty thousand years ago, Jiu Chen, known as the god of war, fell into a deep slumber after sealing away the demon lord. Ling Xi accidentally wakes him from his sleep and they fall in love. It is discovered that Ling Xi was born with an evil miasma that can help the demon lord break free and allow the demon tribe to rise to power. Jiu Chen refuses to kill an innocent and tries to change Ling Xi's fate. Through the encouragement of Jiu Chen, Ling Xi who was once innocent and naive transforms into a brave leader in a fight against evil. Edit Translation 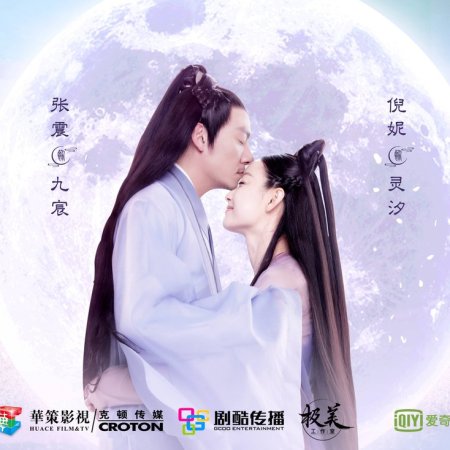 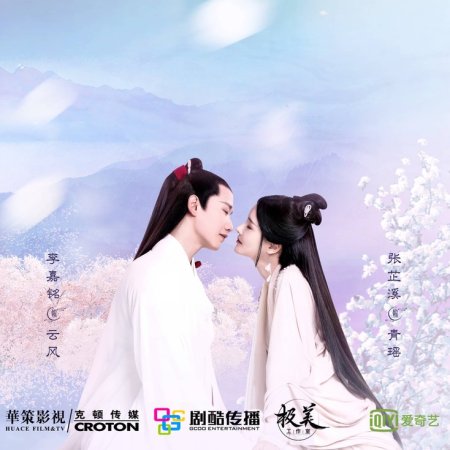 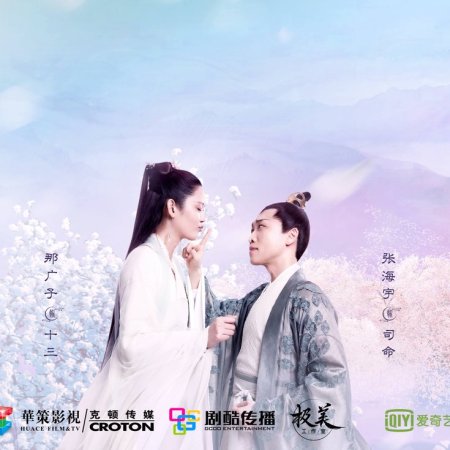 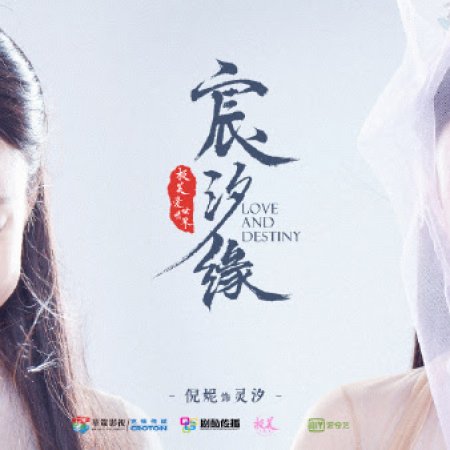 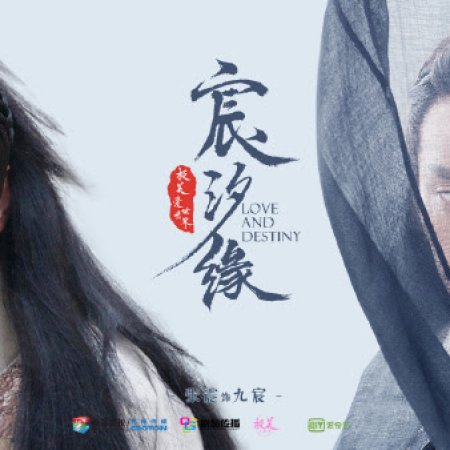 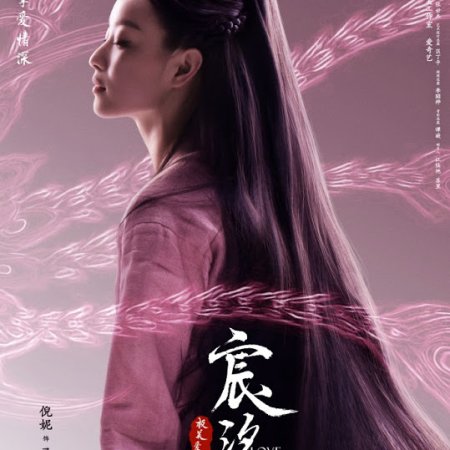 Since Love and Destiny was produced by the same team and resides in the same world, comparisons to TMOPB are inevitable. Pleasingly, the only connection is that it takes place earlier in the same 3L3W universe. This is efficient as less time is wasted on world building and explaining the tribes, hierarchies, time and other conventions. The story-line sticks to the 3L3W formula of an unforgettable love story that spans three lives and three realms. While TMOPB was an intensely passionate love story, this has more of a romantic comedy flavor. This is the story of a pure heart-ed young fairy who falls in love with the powerful and much older God of War. This relationship dynamic sets up for a different love story that again succeeds in delighting and captivating in a way that is now becoming a 3L3W brand.

The plot is common for this genre (save the world or save the girl) and is this drama's biggest weakness. Those familiar with the director may observe the backstory of some leading characters (Jiu Chen, Ling Xi and Jing Xiu) were inspired by Journey of Flower - (Bai Zhihua, Hua Qiangu and Dongfang). That said, L&D is neither another TMOPB, nor JOF but a delightful story that stands on its own, albeit with a few cliche tropes. The three main arcs could have been better balanced - the first two took too long and did not leave much time for the final, most satisfying arc. There were too many (well executed) comedic fillers in this drama. This made it feel like "nothing's happening" or the relationship progressed too slowly.

The weak plot was compensated for by superb acting by the main leads. Veteran actors Chang Chen (Jiu Chen) and Ni Ni (Ling Xi) were perfectly matched. They are both gorgeous actors whose emotions and facial expressions transform and make them compelling in their appeal. The role of Jiu Chen was made for a Chang Chen that is aged to perfection - his sculpted bone structure and fierce expression exudes the aura of a stoic, mature and powerful God of War. Any suggestion that some young idol actor could have pulled this off is ridiculous. Jiu Chen is a formidable character that wears the lonely responsibility of keeping the realms safe. He moves mountains to force a win-win in his terrible conflict between duty and love. His instinct is to protect Ling Xi, to the fault of hiding the truth from her. He is alternately stern and helplessly indulgent with her. His impassive expression softens, he even smiles and becomes open and vulnerable only with Ling Xi. He is touchingly candid and unguarded when he confesses his feelings to her. With insight beyond her youth, Ling Xi recognizes the loneliness and burden inherent in Jiu Chen's role. She captivates him with her spell-blinding smile and mischievous antics; he is touched by her devotion and inept attempts to aid him. As their feelings grow, you can feel the invisible bond of their awareness and affection for each other. Ling Xi's best, most courageous moments are when she makes unbelievable sacrifices in order not to add to Jiu Chen's burdens. Each loves the other more than they love themselves.

In the first arc (20+ episodes), the Ling Xi wakes up Jiu Chen, who had been frozen for 50,000 years after sealing the Demon King. He is suspicious that such a weak fairy could have awakened him and takes her in, ostensibly to care for his health. The guileless and infatuated Ling Xi is delighted and disrupts his household with her comical attempts to entice him. She loses her senses over him and fires up his stone cold heart with her devotion. However, as God of War it is his duty to execute the young fairy with the ability to release the Demon King. Initially I found Ling Xi too subservient; a bird immortal with a bit of a bird brain. Yet Ni Ni's portrayal of Ling Xi was never annoying, indeed I was charmed despite my preference for stronger characters. She won me over when she bravely steps up to protect Jiu Chen and takes responsibility for her own life.

In the second arc (up to episode 50), Ling Xi is reincarnated as a mortal Lin Mo who has to go through three trials. She overcomes many challenges and becomes independent along the way. This is where Jing Xiu emerges as a manipulative, petty and sinister love rival to Jiu Chen. Episodes 30-40 can be skipped - this part was draggy and I struggled to empathize with Jing Xiu. This actor overacted the villain when he is actually supposed to be a grey character - he was so selfish, manipulative and creepy I was irritated at Ling Xi for not being wary of him. There were many unnecessary side characters in this arc that lingers too long on Ling Xi's coming of age. The best moments are between episodes 40-50 where Jiu Chen and Lin Mo fall touchingly in love (again). The final arc was the shortest and the sweetest. Ling Xi becomes a powerful high goddess who forces Jiu Chen to let her share his burdens and they face their enemy together.

The supporting cast was strong and there is a lovely secondary love story between Yun Fung and Qing Yao that is nicely intertwined with the primary. The villains did a decent job being evil and hateful but their motivators were typical: revenge, envy and obsessive unrequited love. The OST is very good but the CGI is quite dreadful. Overall a quality and enjoyable drama with a big budget. The bottom line remains as a love story, it boils down to the main leads. In this, they delivered - virtually all of their scenes brought a silly, lovesick and goofy smile to my face. You will enjoy this immensely if you appreciate leading actors and a love story that is truly aged to perfection.

PS - got a number of PMs re: comparison to TMOPB. I avoided directly comparing them but I also reviewed TMOPB and if you read that, what I think the differences are is obvious and reflected in the rating.

Completed
Gina
23 people found this review helpful
Other reviews by this user
1
Aug 18, 2019
60 of 60 episodes seen
Completed 1
Overall 10
Story 8.0
Acting/Cast 10
Music 7.5
Rewatch Value 8.0
I made a vow to write a review immediately after the show ended and believe me when I say the emotions are still raw. Where do I even start? Love & Destiny is such a compelling and beautiful piece I don't think I can find the exact words to describe it. If you love Eternal Love you will definitely love this one, It produce by the same team. It doesn't related to Eternal Love, I repeated it not related to Eternal Love.

The story is brilliant, undramatic and reasonable . Love & Destiny will blow you away (even if you're not a fantasy/xianxia/historical genre kind of person) Also, If you like The Journey of Flower, you will love this without a doubt.

Everything is so stunning from the costumes, to the set and the cinematography. I'm especially fond of the open song. Particularly their love story. The different clans coming together and all the magical elements and all are very interesting.

The acting was spectacular. Ni Ni & Chang Chen did a fantastic job as always. Although it was my first time watching Chang Chen, his character as Jiu Chen is so easily to fall in love with because he is that good at acting. Chemistry was flawless, but kind of slow at the beginning. Their love is not quite as transparent as other fantasy drama but they portrayed spectacular; you could feel their love and pain and share their happiness. Their love is very settle , you have to watch each facial expression to tell.

Every other character was very likeable having their own unique personalities. The other side characters and love stories are also super sweet especially Qing Yao & Yun Feng.

The only problem I have (not with the drama) itself, but the two villain. I feel they have not being punished enough.The ending feel a little rush to me.

Rewatch it? Definitely. No qualms about it.

This is truly a masterpiece and I can safely say Eternal Love is my favourite C-Drama. 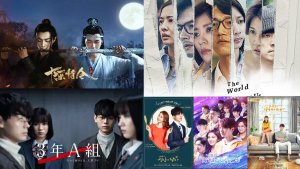 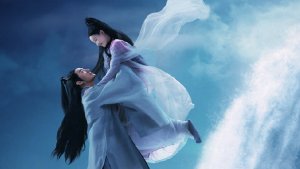 7 Reasons Why You Should Watch Love and Destiny