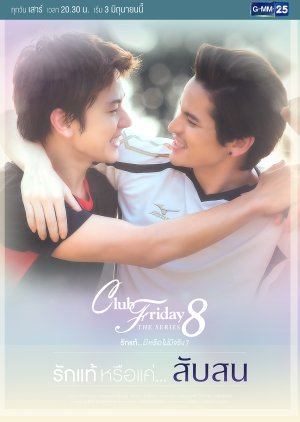 The drama relates the tale of two men who have been the best of friends since childhood. Tod and Meng were thick as thieves in their high school days, but somehow lost touch after a fight. Years pass when Tod and Meng get reunited after Tod followed Meng to work with him in the same company. Meng, however, at this point has a girlfriend, Nuch, who became jealous of Tod and Meng's close friendship. The three become involved in a love triangle and Meng's sexuality comes into question. Who will Meng choose in the end, his best friend or his girlfriend? Edit Translation 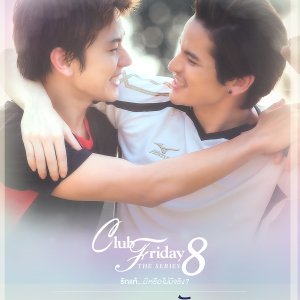 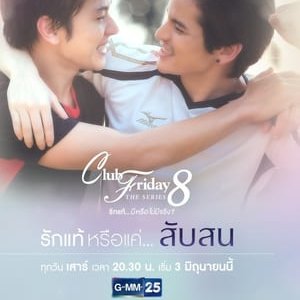 Completed
A7spider
5 people found this review helpful
Other reviews by this user
0
Jul 7, 2018
4 of 4 episodes seen
Completed 0
Overall 8.0
Story 8.0
Acting/Cast 8.0
Music 6.0
Rewatch Value 9.0
This was a drama I wasn't expecting to like too much because of who I saw cast as one of the main characters...Tao. I have seen him in previous dramas and I felt like as a supporting cast character he is great but as a main I felt like he was too weak to carry the weight himself. This drama however changed my opinion on him. I felt like this role fitted him really well. He played the jerky best friend to a T and I forgot whom he was and only saw him as Tod. The chemistry between both male actors was so strong and natural. There was never a moment where I felt it was off. The story is one that I have seen before but the ending however was different. At first I thought there was another episode I needed to see and when I found out there wasn't I started to think the ending was trash but in actuality the ending was perfect with title and realistic. It left me brokenhearted a little but then I just felt almost relieved. I don't know how to explain without spoiling the ending.

Meng was a bit frustrating for me because he couldn't figure out what he wanted. He couldn't figure out if he was gay or straight and he never really tried to give himself time to or anything. He purely acted off his feelings and just...I don't spoil but some of the stuff he does was stupid but I could see someone acting like this. Tod also was frustrating for me because he is childish. Their personalities are complete opposite then throw in a possessive girlfriend and it's just a huge mess...but so entertaining. I think I hated all 3 of them at one point but loved them later on.


The message I pretty much got from this drama is that 'If you don't decide on who is most important in your life and then hold on to that (person or persons) then life itself will force you to come to a conclusion you might not like the results you get. So don't fool around too long. ' That's pretty much what I got and I think this is very important for me to remember this in my own life.

Anyways I recommend this to anyone because it has all the things you could want in a drama: romance, fighting, confusion. friendship, growing up, making tough decisions , scandalous situations and comedy. And it's short too and easy to watch again if you like it enough too. I give this an 8. The reason it doesn't get a 10 for me is because I felt like there was something missing. I am not quite sure what it is yet but I feel like a scene may have been edited out that would have helped with the last episode from feeling a little lacking and would have made the ending stronger.

Completed
Tanky Toon
5 people found this review helpful
Other reviews by this user
0
Jul 26, 2018
4 of 4 episodes seen
Completed 0
Overall 8.0
Story 9.0
Acting/Cast 9.0
Music 6.0
Rewatch Value 7.0
Out of the Club Friday Stories that I've watched with a gay theme, this is easily my favorite out of them all. I almost did not watch this drama
because Tao who plays Todd, annoys me with his pencil thin excuse of a mustache (I'm quirky like that). But after watching a few episodes I got used to it, (I just used one eye to look at him). And Toni who plays Meng is a hot tamale and his chemistry with Tao/Todd is sizzling hot.

Speaking of which, I have to give both of these actors credit, as Tao managed to make me want to punch him in the face because of his childish antics. He played the role of a free-spirited rambunctious guy who does nothing but cause trouble for Meng. But when push comes to shove, Tao as Todd delivers and becomes the responsible adult that sometimes Nuch wished he was. Toni was also believable as the conflicted Meng, who believes he is doing everyone a favor by being nice. On one hand, Meng tries to cater to his girlfriend's unreasonable whims, and yet on the other, he tries to keep his best friend Tod close to his hip whenever Nuch is not watching. Nuch, meanwhile, is really annoying as the bitchy and jealous girlfriend who does not seem to think about other people except herself. I was so annoyed that I wanted to boot her to the curb faster than you can say "sayonara."

The story is interesting as it took me through a journey where I also felt confused about the actions that Meng took, because it seemed to me he was the center of the drama, and also the center of the problem as he could not seem to make up his mind about what he wanted. It looks to me that he wanted his cake and eat it too, but we all know that couldn't happen. The story however left me hanging and felt that it was not resolved either way, but maybe it is a good thing and this is one of those dramas that I am OK with an ending that is up to interpretation.

New Topic
Be the first to create a discussion for Club Friday The Series Season 8: True Love…or Confusion