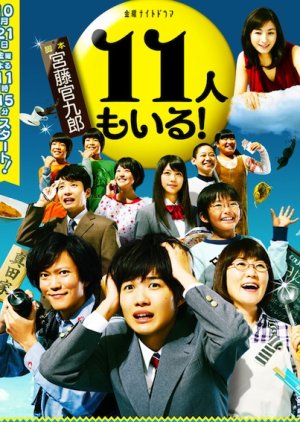 Completed
Akki
15 people found this review helpful
Other reviews by this user
0
Dec 13, 2012
9 of 9 episodes seen
Completed 0
Overall 9.0
Story 8.0
Acting/Cast 8.0
Music 9.0
Rewatch Value 9.0
Okay guys, this is my very first review; I'm not sure why i haven't written any so far. But here we go:
After seeing so many dramas, I've developed this sense of prediction what will happen next in most of those I've been watching and i assume many of you did as well. This drama is everything but predictable.
Many unexpected events occurred and it made me wonder what for God's sake I've just seen. It has a bit special sense of humor, so it might not suite everyone's taste, at the moments it gets even weird, but it definitely has its own seal. I have to admit, i haven't seen a lot of family dramas, but this one was totally my coup of tea. Although I enjoy watching comedies, it's really, really hard to make me laugh out loud. I didn't have this kind of problem while watching this one.
The story was really heartwarming and it gave me the feeling of family warmth, which is the purpose of family drama i guess. Characters were unique and well designed. The story gave enough of space for every character and a chance for us to meet them all and hear their stories. Actors were good as well, especially the kids. Kamiki Ryunosuke's acting was at the moments odd, but overall, it was great and he was a nice surprise. Tanabe Seiichi was amazing and i couldn't imagine anyone else in this role. I really liked the character he portrayed - a totally unusual father with a totally unusual actions. The supporting characters were also amazing and led us to many hilarious moments. I really liked that after each episode, family was growing bigger and bigger. Even the supernatural part with a ghost of late mother was very well matched and had a great meaning behind the funny scenes.
Music was also very good, especially the opening, and nothing in this drama was unnecessary.
As for rewatch, i'm a rewatcher, i usually rewatch dramas i've liked sometimes more than once and this one i'll surely see again!
Anyway, if you are the fan of Japanese dramas, i suggest you give this one a try - it has that Japanese touch and sense of reality - although in this drama you might find some parody elements as well.
I hope you'll enjoy watching it!

Completed
ltsukino
13 people found this review helpful
Other reviews by this user
0
May 17, 2012
9 of 9 episodes seen
Completed 0
Overall 8.0
Story 9.0
Acting/Cast 8.0
Music 10
Rewatch Value 8.0
Ok, so this was one of the best choices I made recently. If you’re looking for a sweet and hilarious drama this is definitely the one.

There were some delays with the subbing so it kept me waiting and waiting for the next episode, but I don’t regret it at all. First you have a family with 8 children, that alone is auspicious of some great comedy developments. I really loved how each of them had their unique traces and space in the story. The other family members that were added also contributed to some of the most hilarious moments. The grandfather and specially the uncle (I love Hoshino Gen’s voice, really.) It also pinned some social problems that I don't want to spoil you, but I think the main focus was on how you can always take the best out of your life no matter how much money you have.

The main actors did a really great job and even Sam, which I had never seen before, did a really great job making me like him despite how terrifying he seemed at first. As for Kamiki, I was a bit reticent as if he would be able to portray a comic character as I had only seen him in SPEC and Bloody Monday, but he did an awesome job, with all the personality crises and social troubles his character had to face.

Of course I would watch this again. Actually, there were already some scenes that I kept rewatching over and over again. You can’t help that.

Completed
Naam
3 people found this review helpful
Other reviews by this user
0
Jun 17, 2014
9 of 9 episodes seen
Completed 0
Overall 10
Story 9.0
Acting/Cast 10
Music 6.5
Rewatch Value 8.0
When I saw the comments on a streaming site from other users,
I thought that 11nin mo Iru! would be pretty bad, and so didn't expect much from it.
Now when I've seen all 9 episodes, it is more than likely that the people who gave bad comments made their judgment from the first episode and didn't watch any more than that, which is a shame - because the series was really good imho.

Unlike other dramas with similar stories, this story was, not only realistically executed despite of the tones of supernatural elements, it also had minor twists you didn't saw coming
and the unpredictability makes the story all the more enjoyable.
The drama includes quirky characters, humor, issues the average family experience,
and the ending was neither rushed nor slow paced.

Now, it's time for the ratings ~
The music gets a 6.5 rating because the only music I can remember from the series was the intro/outro theme (which is the same song btw).
The rewatch value would be a solid 8 I'd say since this is the type of drama I could watch at the very least 100 times over.
I got no complaints regarding the cast, in fact I'm surprised that there was hardly any character in the story you wouldn't like, and that is a rare feature.
Rating for the cast is a full 10. Congrats.
The story gets a 9, which is very good in my book.
And lastly, the overall rating is the same as my rating for the cast: 10!

Completed
mecchaumai
0 people found this review helpful
Other reviews by this user
0
Jul 25, 2018
9 of 9 episodes seen
Completed 0
Overall 8.5
Story 8.5
Acting/Cast 10
Music 9.0
Rewatch Value 6.0
This review may contain spoilers
I am not a big comedy watcher... but this grew on me a lot. I watched it for my watch challenge, thinking I could just about bear with it, but ended up actually enjoying it alot.

The acting was brilliant and I have no bad words to say about any of the actual cast. I was fully engrossed in all their characters and forgot that it was fiction at times (other than the slapstick aspects of the show). Kato Seishiro did an absolutely fantastic job of playing a shy youngest sibling yet keeping the mischievous young boy character going. I know that he's done a few, but it is always nice to see Kamiki Ryunousuke in a character that isn't (as) troubled and twisted as some of his more dramatic characters. The good thing about the drama is that it does a good job of balancing a few main characters alongside a large supporting cast. A lot of the time it actually feels like you are in the family home alongside them.

Like the other reviewers have said, this is an unpredictable drama, which makes it very enjoyable and always wanting to know what happens next.

There were a couple of characters that I HATED but I think they are meant to be at least disliked to give the drama variety. On the flipside there were a few characters that I was constantly rooting for. Without spoiling it, I believe that it would not have been as interesting without the characters the show allows you to hate.

Although, on the same line, the show has very much a 'squeaky clean family' feel for the most part. While I complain that I hated a couple of the characters, I think they missed a chance to have a couple of the siblings as 'rotten eggs', and instead, some of the time, it almost feels like the drama is forcing you to believe that the family is amazingly kind and wonderful and that they have [never] done anything wrong in their lives, or that when they do it's pretty tame. I would love to see a version of this where it's the opposite, and the mothers not at all happy with the [insert spoiler, if you've watched it you'll know what I mean], but that would be a different genre entirely.

However, it is enjoyable and I recommend it to those looking for something a little lighthearted, or family oriented.