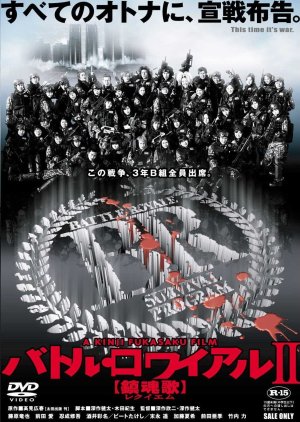 Three years have passed since the infamous Battle Royale massacre, and one of the kids that survived the bloody game - Shuya Nanahara - has set up a terrorist group, declaring war on Japan's adults. A new game is established by the government, and the 42 randomly-selected school kids are this time given the task of storming the terrorists' island fortress to kill Nanahara within three days - or they themselves will be terminated. Edit Translation 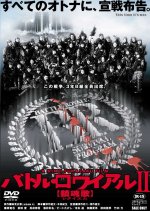 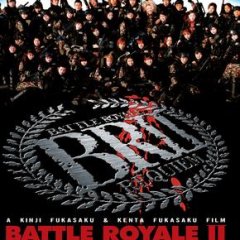 Completed
BeanDip
7 people found this review helpful
Other reviews by this user
0
Jul 16, 2013
Completed 0
Overall 4.0
Story 7.0
Acting/Cast 6.0
Music 7.0
Rewatch Value 1.0
The film had great potential for being a good watch; with it's plot set up as so, however, this movie was a big let down for me. I relatively liked the first Battle Royale, and I was excited when I saw there was a second one, especially since the plot looked pretty good, but it turns out I had just wasted 2 hours of my life.

As mentioned, it had potential to be good, but it was draggy, boring, and somewhat unrealistic with the way people handled being shot (it was the same in the first movie, but I dismissed it). Which brings me to acting.

The acting was ok; the multiple bullets in their chests proving no match as they continued on to do, what I would call, laborious tasks such as dragging another person's body, and shooting some more people while running wildly. So, I guess they're stronger than the average person?


Overall, I don't really have a doubt that this would've been clicked onto my 'dropped' section of the list had I not developed the no-dropping-rule for my list. I even had a text conversation during the movie, if that tells you anything. It didn't keep me entertained for more than 5 minutes at best, the plot turned sour and boring pretty quick, and it just became a hard task to finish out the movie.

Completed
Leslie
2 people found this review helpful
Other reviews by this user
0
Jul 7, 2015
Completed 0
Overall 2.5
Story 6.5
Acting/Cast 2.0
Music 5.0
Rewatch Value 1.0
This movie could have been so good, But some things fell short.

Also the lead role actor Tatsuya Fujiwara was fresh off is Death Note kick, so I guess he felt like he didnt really need to try and actually act anymore because he'd made enough money.

If you want to watch this for the glory for the Battle Royal name, go right ahead. But the acting, and the change in direction might throw you off.
Was this review helpful to you?
View all

New Topic
Be the first to create a discussion for Battle Royale II: Requiem 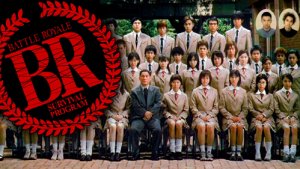