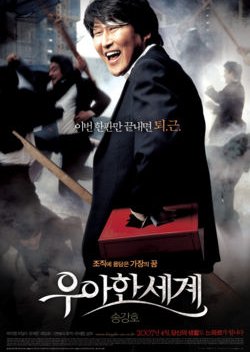 With middle age creeping up on him, the life and achievements of amiable, mid-level Korean gangster Kang In-gu are about due for an objective assessment. He’s certainly not in top streetfighting form anymore, and the young thugs under his command aren’t exactly an elite troop of criminals. Moreover, his wife is running out of patience with his career choice and the lack of social finesse it entails, and his dearly loved daughter is embarrassed beyond words by her often uncouth dad (but then, aren’t all teenagers?). Kang’s dream is to buy one of those impressive, Western-style suburban homes, in which domestic peace may at last blossom. But his headaches at home are matched by even more sinister developments in the criminal underworld he inhabits. Kang is highly esteemed by his boss, who favours him over his own brother -- an underling to Kang, seething with resentment. A conflict with another gang puts Kang and his childhood buddy on opposite sides of the fence. The fact is, Kang just wants everything to work out right for everyone –- and we all know which road is paved with good intentions… the road to hell. Edit Translation 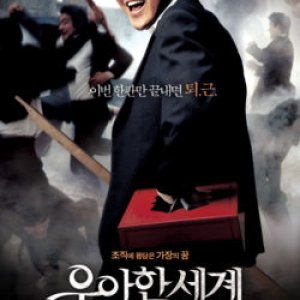 Completed
PrashastSingh
0 people found this review helpful
Other reviews by this user
0
Mar 18, 2018
Completed 0
Overall 10
Story 9.0
Acting/Cast 10
Music 9.0
Rewatch Value 8.0
Being a Song Kang-ho fan, I wanted to see this film but I was afraid I
won't get to see it because it's an old film. But surprisingly I found
the film in the highest quality and shifted the timing of subtitles to
match the dialogues. I watched it and I can say that THE SHOW MUST GO
ON is the best gangster film ever, largely because of its light-hearted
take on the genre.

Song Kang-ho is excellent as usual. His performance is an excellent
one, and the best of him comes out in the climax. Oh Dal-su provides
occasional comic relief, as does Song Kang-ho. Other actors are also
good, and deliver good performances.

The director and writer both deserve a great amount of praise for
mixing action, comedy and emotions very well. There's not a single
scene I didn't like. I loved every single scene of the film and found
it very refreshing, as not most of the films of this genre are as good
as this.

The comedy is natural and hilarious. The action sequences are good. The
emotions are very well portrayed and have a lot of depth. The entire
screenplay is excellent, as is the editing. The film doesn't bore for
even a single second, and I fully enjoyed it.

Many films will come and go, but this film will always remain great.
THE SHOW MUST GO ON IS the best gangster action drama which
entertains thoroughly and makes sure you leave the seat both with tears
and a smile, as the climax is wonderfully executed. It's an enjoyable
family entertainer that has a repeat value.

Movies to watch (without Sunny)
144 titles