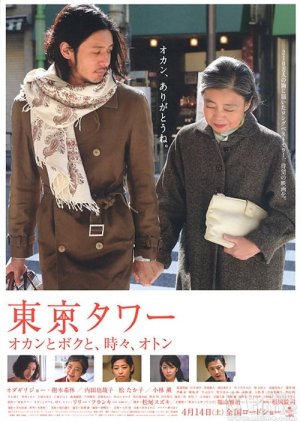 Adapted from the bestselling Japanese autobiography of the same title, the gentle coming-of-age drama Tokyo Tower - Mom and Me and Sometimes Dad concerns an adolescent boy, Boku - Masaya, torn between the inherited recklessness of his father Oton and the inherited responsibility, wisdom and emotional strength of his mother Okan. Following a period of intensely rebellious behavior, Boku learns that his mom has contracted cancer; suddenly, his mother comes to live with him in Tokyo the entire emotional landscape of his life is altered. Edit Translation 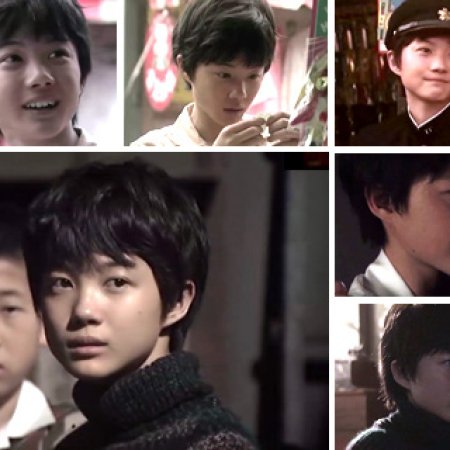 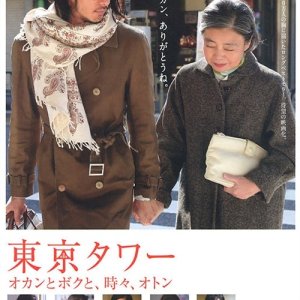 Completed
BrightestStar
8 people found this review helpful
Other reviews by this user
1
Jun 26, 2014
Completed 1
Overall 8.5
Story 8.0
Acting/Cast 9.5
Music 8.0
Rewatch Value 6.0
This movie is all about the relationship between the son and his mom who's the sunshine in his life. The story is pretty simple, but executed so sweetly. It kind of emmerses you in that tale. Nothing is glamorized and all felt like watching people go about their everyday life and what they make of their decisions.

Acting wise watching Odagiri joe and Kiki Kirin was both heartwarming and painful at time. I first gotta say I find Odagiri so good looking here!! XD. Kiki Kirin is so amazing she's really the star here, with her lovely daughter (playing her younger self). I remember first watching her in Villain where she totally broke my heart and stle the whole movie for me so she already won me over. But here, specially once she comes to live in tokyo, you just feel all the joy she brings with her. And that source of her joy is her son. As for him, you love him for wanting her in his life so much. You love him for never feeling that he finds her a burden. I particularly love the scene in the poster, it speaks so much of their relationship! The dad character might've been a lousy husband, but you can't really hate him lol. As for the girlfriend, I just didn't feel it. I specially did not feel the honesty she's supposed to exhibit. But her character doesn't matter so who cares :P

This movie is pretty long and slow-paced. The movie is about 20 min over the 2 hours but though I didn't find it short but I felt satisfied with the ending. I felt that I didn't need more or less. Not for everyone, but if you're an Odagiri Joe fan, if you like heartwarming stories, slow paced slice of life, I think chances re you'll like it.

Completed
DragonAlien
4 people found this review helpful
Other reviews by this user
0
Oct 29, 2015
Completed 0
Overall 9.0
Story 9.0
Acting/Cast 10
Music 7.0
Rewatch Value 7.0
This movie hit me right on the spot. I had to pluck up the courage to watch it cause it deals with very sensitive topic for me and since I've experienced the same thing he did it was one tough, overwhelmed and hearbreaking ride. But I had to do that. It's definitely one of the most emotional movies I have ever seen. Why? Well because it shows not only relationship between him and his mother which was so beautiful, powerful and strong going through many obstacles in life, it also shows the whole process of one person going through cognition, denial and acceptance of being ill from cancer. It shows us whole her life from the moment she got sick while fighting, while bearing alone all that horrible pain always with a smile on her face, surviving and slowly dying from pains of chemotherapy and then in the end sharing that pain and sorrow with her son. She never gave up, she fought until the very last breath, oh how she reminded me of my mom in some moments. it was so so difficult to watch, at many scenes I let my soul cries out and I sobbed and sobbed and sobbed...
Actually it took me 5 hours to finish it cause I had to pause at every few minutes, my eyes were filled with tears. All I can say it was worth it, this is really one of those movies which will affect you no matter what, too many powerful emotions are involved, love, respect, admiration, positivism, despair, devastation, fight, hope, sorrow and grief. Odagiri was brilliant in his expressions, his gestures while holding his mother and being scared like a little child, while knowing that she won't make it but still staying strong cause he learned that from her. She- so full of life, cooking, dancing, smiling, living her life to the most positive way possible, giving all her love to her son, doing everything for him, and still enjoying in her own things. What a grand parent she was, quietly enduring everything, secretly doing things for him supporting him in every way possible- simply cause sacrifice mothers make for their children is really priceless. Kiki and Odagiri felt so much like real mother and son, they had amazing chemistry and all things they did together felt so real and natural, incredible actors for sure.
So in the end no matter how much I felt lost and devastated, I felt even more proud, happy and whole cause I had an honor to have mom similar like Eiko was.
Going through all stages in life, showing us his life since he was a kid until he became a grown up man, this movie simply has one ultimate message: love your mom, respect her, spend as more time as possible with her in as more as possible positive way cause life is really too short and at any moment any one of us could disappear from this world. Appreciate those times, taking care of your parents, cherish them cause family bond is the strongest power of all the powers in the universe.

New Topic
Be the first to create a discussion for Tokyo Tower: Mom & Me, and Sometimes Dad 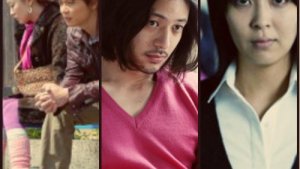 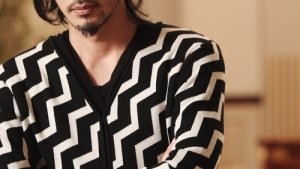