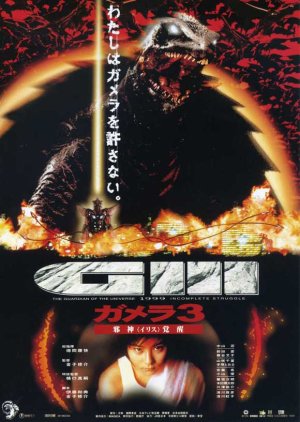 Three years have passed since Gamera defeated the Legion, and the world is once again plagued by the Gyaos have evolved into Hyper Gyaos Mayumi Nagamine, noted ornithologist, returns to aid the Japanese government in addressing this threat. A graveyard of Gamera fossils is found at the bottom of the sea. Shadowy government agents, occultist Miss Asakura and Kurata Shinya, are meanwhile working to a different agenda, with Asakura believing Gamera to be an evil spirit.a young girl named Ayana, whose parents were inadvertently killed by Gamera during his previous battle with the Gyaos in 1995, discovers a stone egg sealed within her village temple. The egg hatches a small tentacled creature, whom the girl names "Iris.Ayana's quest for revenge, as she seeks to raise her own monster and take vengeance against Gamera Asakura and Kurata, deliberately trying to use the girl to summon Iris Iris had been deliberately created to defeat Gamera so that the Gyaos could wipe out modern humanity. Edit Translation 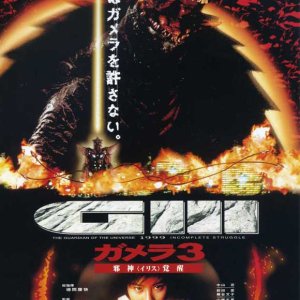 New Topic
Be the first to create a discussion for Gamera 3: Revenge of Iris