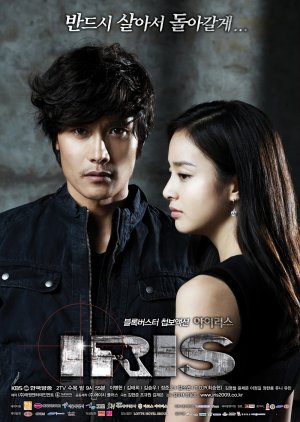 Kim Hyun Joon and Jin Sa Woo are best friends who were brought into a top secret organization known as NSS by analyst Choi Seung Hee and Park Sang Hyun. Hyun Joon and Sa Woo both fall in love with Seung Hee when she first profiles them. Their lives are changed forever when Hyun Joon is given a solo mission in Hungary. Hyun Joon later tries to find out who set him up and to figure out what IRIS is and wants. Edit Translation 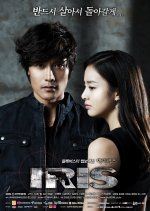 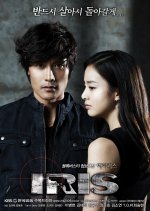 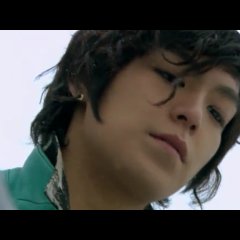 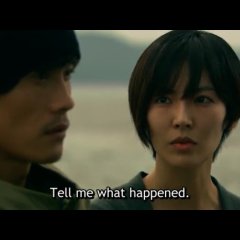 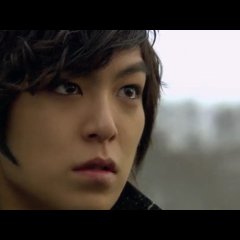 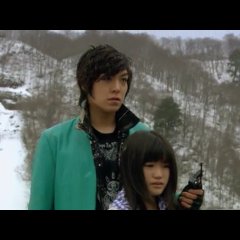 Simply because this is an action drama, I just love watching action dramas and IRIS seemed to be the right choice at the time.

The general storyline was written in a good way, there were a lot of interesting cliffhangers all over the drama, action-suspense packed with romance thrown every once in awhile.

*Being an action drama that's full of suspense isn't something new yet to see this type of drama in the Korean industry is rare that's why it would feel appealing.

--->Action: Considering the fact that this is an action drama, it contained many fighting scenes which were attracting to watch. The action element was set in a way that would make the viewers anxious about the next fighting development. Well, martial arts scenes were practically absent, only guns and free wrestling yet it felt right for this kind of drama plus fighting all over the drama was cool to follow.

--->Suspense: The suspense element wasn't very interesting like the action element yet that doesn't deny the fact that it had an important effect through the drama and the story's development. It's true that it wasn't present ever since the beginning but the fact that it got extended every episode was a smart move to make the audience wonder about what will happen next.

--->Romance: I wouldn't say it's fully a positive point but it was the right amount for an intense drama because in action-suspense dramas, too much romance would ruin the whole plot. Here, romance participated in the story's development by making it more captivating.

*The negative points that I can think of are related to the suspense element; it's true that I previously mentioned it in the positive points column and it's true that suspense made this drama more interesting yet when there is suspgense and mystery there should be "truth revealing" at/near the end but that wasn't the case here. Yes, we get to know many things but it was left open in an annoying way.

I am not very familiar with him as an actor so I wondered if he could pull off an intense role, I also kept questioning his ability in delivering emotions through his acting and the answer was: Good action actor, I liked his skills whether in action or in the dramatical scenes (even though there weren't many).
Kim Hyun Jun was an ordinary action lead male character, I can't think of something special about his character since I've seen it many times before yet it wasn't boring nor usual to watch. I enjoyed his scenes especially his action scenes because he had some respectable action moves.

I like this actress but I believe that her previous roles weren't that interesting therefore I was happy to find her in an action drama with a an intense role. I wanted to confirm her skills and I am satisfied; her perfomance was good enough to make me like her even more.
Choi Seung Hee was an acceptable character, it's true that her action scenes weren't that special and I wanted her to be more strong yet it was good enough to keep the entertainment.

*Other Cast:
As for other main roles, I believe that they were satisfying as actors and characters. Supporting roles were good, I have no complains about them. I specially liked the second lead female as an actress and as a character.

--->Romance: There was great chemistry between the main roles, the romantic scenes between Hyun Jun and Seung Hee were always good to watch.

--->The Triangle: It was different and much better from other usual boring Korean triangles.

Don't expect too much from the ending, it's one of the storyline's flaws since it doesn't answer the suspense questions yet it's expected for this intense drama. The ending will leave with lots of questions, it could be considered as an open ending or maybe they're preparing questions for a second season or a film, in that case I wouldn't consider it as an ending.

*Usually, an action drama is always interesting for me but this drama had great bonuses: Romance and suspense, which means that I fully enjoyed it from the beginning till the end.
*There's no chance that you will get bored while watching this drama. You can consider it as a thrilling ride that will take you through amazing events and awesome action scenes.

*Is this drama memorable: Yes it is, the fact that it is one of the fewest Korean action dramas, I think it worth a spot in my "unforgettable dramas list" and I am still hoping for a second season, I think it would be good.

*IRIS is a drama that you need to watch when you're looking for a respectable action story with lots of mystery and suspense and let's not forget that it has great main roles.

Completed
khaoulatity
30 people found this review helpful
Other reviews by this user
0
Oct 20, 2012
20 of 20 episodes seen
Completed 0
Overall 10
Story 10
Acting/Cast 10
Music 9.0
Rewatch Value 10
I discovered Iris thanks to a very beautiful kiss scene shared on youtube, and I came to watch it thanks to that, but also because I love Kim Tae Hee.

Today? Iris is in my top dramas, with a 10 as note.
Why? because for me it was absolutely amazing.
*Acting: FLAWLESS and impressive
*Music: Great
*Story: Great, with a lot of suspense, cuteness, humour, real emotions
*Couple: incredible chemistry
*Kisses: OH MY GOD! (my favourite kiss EVER is in this drama (Ep 3), equally placed with the tiptoe kiss of Queen In Hyun's Man)

I laughed, cried, smiled with the characters. It was hard not to watch the next episode just after finishing one as it was very intense.

and you know what? when I rewatched Iris, I had the exact same feelings and reactions! isn't that amazing? ^^

in short: REALLY love it!

New Topic
Be the first to create a discussion for IRIS 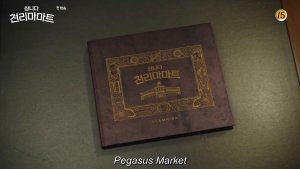