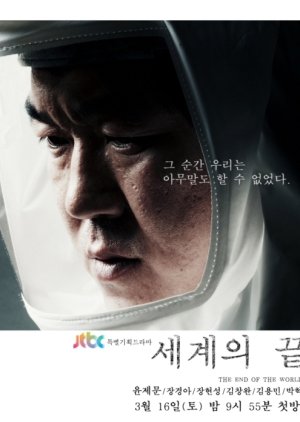 An unidentified epidemic with a 100% fatality rate strikes Seoul. There is no guarantee who will be alive tomorrow. The Korea Center for Disease Control (KCDC) begins investigating the unknown so-called “M(Moon)” Virus. The KCDC tracks the origin of the “M” virus, uncovering that the carrier is, in fact, an ordinary student. Realizing he has the virus, the carrier student secretly runs off. Finding the fugitive becomes a top priority for the KCDC’s virus investigators. Joo Heon is the KCDC’s Sherlock Holmes with his sharp instincts. While the investigation is underway, Joo Heon gradually becomes infatuated with Na Hyun, his fellow investigator. After much hesitation, he eventually confesses his feelings for her. When they share their feelings, the M virus puts their romance in jeopardy, when Na Hyun is infected with the virus. (Source: JTBC) ~~ Adapted from the novel "Infectious Disease" by Bae Young Ik. Edit Translation 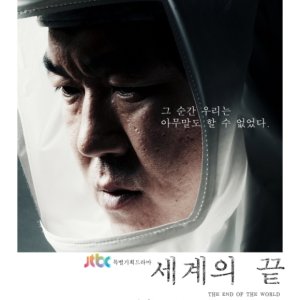 Completed
Gio
6 people found this review helpful
Other reviews by this user
0
Aug 23, 2016
12 of 12 episodes seen
Completed 0
Overall 8.5
Story 8.0
Acting/Cast 8.0
Music 8.0
Rewatch Value 7.0
The End of the World is one of those dramas you can watch without having to completely turn off your brain. And that means really a lot.
The way in wich it mixes the police thriller and the medical drama is quite new and refreshing, especially for the Korean television, where it is so rare to see something that tries to break off from the conventional genres. What is particularly praiseworthy in this drama is the strict commitment to realism in the portrayal of characters and scenes to counterbalance the science-fiction elements of the plot. You end up believing the whole story, although it can seem unrealistic, because you see the people on the screen behave like you imagine they could do in the real world.
I feel here that the director and the writers really believe that the story they are telling is worth of attention, and so the plot is not simply the pretext for the typical scenes you could expect in this kind of drama, but is well assembled so that each step leads to the next in a natural way.
The medical and political elements of the setting are well explored and instead of being merely on the background they constitute one of the driving elements of the plot.
For once you have doctors that do not act like every 16 years old schoolgirl, but you can feel that there is something specific in their professionalism.
Another thing that makes this drama really stand apart is that it tries to convey some meaning, not just to fill up the airing time it is given. It displays a society in wich the egoism of each individual leads to a possible disaster, and explores various forms in wich this egoism hide itself.
I have to admit that the show slows a bit down in the middle part and that the ending, with the cut imposed by jtbc, although decent, is not as satisfying as it could have been.
Finally The End of the World is another great work from director An Pan Seok and a great show for people that want something more than the typical drama.

Completed
wonhwa
11 people found this review helpful
Other reviews by this user
2
Apr 15, 2014
12 of 12 episodes seen
Completed 2
Overall 6.5
Story 6.0
Acting/Cast 8.0
Music 6.0
Rewatch Value 2.0
What do you get when you cross a medical drama with a zombie flick? Something a lot like The End of the World, a show whose dark, twisted DNA owes more than a little to the horror genre. Speaking of dark, twisted DNA, the show revolves around a virus that not only kills its victims, but has the nasty side effect of making them want to kill others. This would be grim enough, but the show also goes a step further, suggesting that the virus is merely a particularly gruesome manifestation of the vindictive self-centeredness lurking in all of us. The infected folks do nasty things, but the uninfected folks are often worse, with the show trotting out an alarming line-up of cowardly bureaucrats, backstabbing academics, corrupt businessmen and murderous moms. There are a few “good” folks in the mix, but even their motives are frequently suspect as they try to sort out who should live or die.

All this makes for gripping viewing, in a train-wreck sort of way, but the unrelenting darkness made it hard for me to really engage with the characters or their world. Some of this may have been due to the unexpected cut in the show’s length, as plot was prioritized over character development, but much of it stemmed from its deep pessimism about human nature. Certainly there are plenty of examples of people behaving badly in times of crisis, but I’d like a drama to leave me with more than “most humans suck” as a final message. Because, really, do you want your audience rooting for the virus?