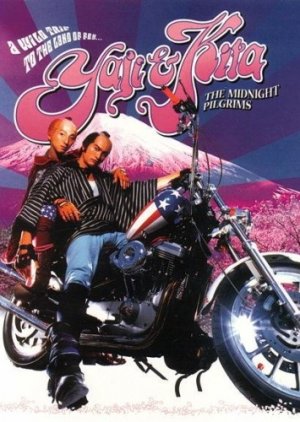 Yaji and Kita are two men who live in Edo and are deeply in love. Yaji is married to a woman, while Kita is an actor addicted to various drugs. One day, they receive an advertisement for the Grand Shrine at Ise, and decide to set out on a pilgrimage there, hoping to cure Kita of his drug addiction. They set out on a modern motorcycle but are forced to turn back and walk the Tōkaidō road to Ise, encountering various characters and obstacles along the way. Edit Translation 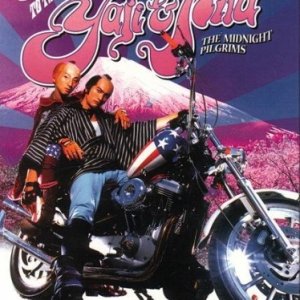 First I have to say that I really liked this movie.
It's rather impossible to say if the story takes place in Edo period or nowadays, but let's say it's mostly in Edo period with some elements of nowadays (such as travelling by motobycle)

One of the good points of this movie is that you can still learn two or three things about the Edo period and the story, despite being more than weird, is kinda addictive. I don't know how many times I thought 'what the heck is this movie...writers smoke some weird things', but I still kept watching out of curiosity, and I don't regret. I even shed some tears at the end.

However, now that I watched this movie a long time ago, I had time to think further about it and I can now see many points that I had just skipped. Thus, the high rewatch value. I think it's needed to watch it at least 2 times to understand fully the movie. Not that the story in itself is complicated to understand, but many of the weird things turn out to be quiet deep in meaning.

I don't have anything special to say about the acting but even though I admit I watched it for Nagase Tomoya, the two main characters were both great.

So yeah, if you are able to bear not understand the meaning of what is happening in a movie in one go and you want to spend a good time, watch this movie :)

New Topic
Be the first to create a discussion for Mayonaka no Kita-san, Yaji-san