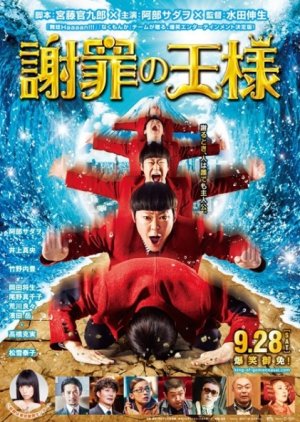 Ryoro Kurojima is the director of a Tokyo apology center. His job is to teach others how to apologize. Ryoro Kurojima solves problems by using his apology techniques on anything from simple arbitration to a national crisis. Edit Translation 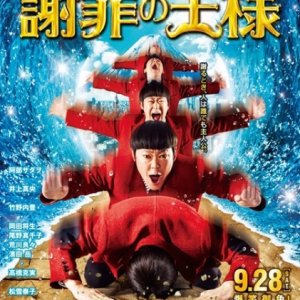 Completed
shaz22
4 people found this review helpful
Other reviews by this user
0
Jul 29, 2014
Completed 0
Overall 9.0
Story 9.0
Acting/Cast 10
Music 9.5
Rewatch Value 8.0
Nobuo Mizuta's movie 'Apology king' teaches us a very important life lesson in a craziest way possible, that the most serious of problems can be solved by simple empathy.

It's a bizarre movie and it's coming from someone who has seen her share of weird stuffs. Only movie I can draw comparison to would be probably 'Fish Story', that should be enough to prove it's quality. The main character is Mr. Kurojima (Brilliant Sado Abe) who's the self employed director of Tokyo Apology Center offering his service to those who fails to make amends. Noriko (Inue Mao, girl can make 240 different scowl face I tell you), his first client of the movie joins him as his secretary and the movie then sets for it's loop hole-ish journey.

If I have to point one wrong in the movie that would be I felt it's a tad too long, specially the final arc. But the wait pays off, real big ;)

If I still fail to drop what you're watching to start this, then listen up: A mash up MV of Verbal, Exile and E girls is in it.

Completed
BrightestStar
4 people found this review helpful
Other reviews by this user
0
Oct 2, 2014
Completed 0
Overall 8.5
Story 8.0
Acting/Cast 9.5
Music 8.0
Rewatch Value 5.5
This is one hell of a hilarious movie. As the other reviewer Shaz22 said, this movie teaches you an important lesson. However the way it's done is what distinguishes it. Being a fan of mystery, this movie sets up the story and its mysteries perfectly in such an entertaining and unpredictable way that makes it total fun watch that you don't feel the time. Some hints given you can catch on pretty early while others totally gets you off guard.

The movie tells the story of a number of individuals that get involved with our hero, the king of apology, Ryoro Kurojima, in different timelines through different point of views which makes the whole movie into puzzle pieces that all goes into place by the end of it.

Of course this movie wouldn't have been the same if it wasn't for it's cast. Abe Sadao sure was brilliantly casted but we also have the lovely Inoue Mao in a yet totally different character that we're used to, Takenouchi Yutaka, Takahashi Katsumi, Matsuyuki Yasuko, Okada Masaki as well as others and each one has his own distinct way of being hilarious.

And when you thought it couldn't get any more hilarious, the ending is beats that expectation. It's funny that throughout the movie they give you the hint, you just never catch on until the director decides to let you catch on.

I totally recomment that movie for anyone, but specially for those you appreciate Japanese comedy. As I mentioned earlier, for whats worth, I found the movie also had a nice message to transmit that isn't even done subtly but somehow doesn't feel preachy. 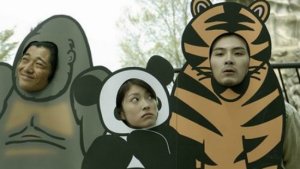