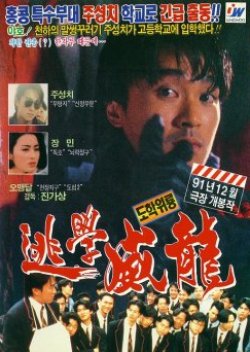 Star Chow (Stephen Chow) is about to be kicked out of the Royal Hong Kong Police's elite Special Duties Unit (SDU). But a senior officer decides to give him one last chance: Star must go undercover as a student at the Edinburgh High School in Hong Kong to recover the senior officer's missing revolver. The undercover operation is made complicated when Star is partnered with Tat - an aging, incompetent police detective (Ng Man-Tat). However, Star still manages to fall in love with Ms Ho (Cheung Man), the school's guidance counselor, as well as disrupting a gang involved in arms-dealing. Edit Translation 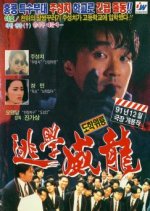 Completed
Herman
0 people found this review helpful
Other reviews by this user
0
Mar 2, 2020
Completed 0
Overall 6.5
Story 7.5
Acting/Cast 8.0
Music 6.0
Rewatch Value 5.0
I'm kind of a sucker for undercover hidden identity stories, and even more so when posing as a student (thank Angry Mom for starting that enjoyment), and yep we get that here with a nice side dish of romance with a teacher.
Anyway, it's really interesting seeing these Asian movies that came out before I was born because they're not just different from movies of today, but from Western movies of the same era. To date I've only seen one Asian movie older than this and I don't think it counted because it was more of a direct opera to screen conversion. I can't say this movie is a favorite, but it's made me want to start finding lots of old Asian movies just for fun.

Story (7.5):
Okay, there were several gags and minor parts of the story that bugged me or that I skipped through, but it also had me laughing out loud in parts and got a whole lot more intense than I expected. The starting point of the plot seems a bit shallow: he's got to go undercover in a school to get a high ranking officers pistol back that was stolen by one of the students. However, it eventually dives into gangs and arms dealings, and includes (non-graphic) men getting blown up and students getting shot. There may have been a fair amount of references and humor and just general behavior of the day that kind of went over my head, but I'd like to think I was able to understand and appreciate most happenings throughout.
As a whole, I thought it could have been more defined since the flow of the story wasn't the best, but it wasn't terrible either and got the point across. Also, plus one for decent action sequences!

Acting/Cast (8.0):
I'm having a hard time thinking of what to say for this area, because I didn't see anything problematic with any of the acting; however, I can't think of anything that made me think "wow that's really good" either. So the acting fit the storyline? The guy was obviously not a teenager, but he did a valiant job even in the low resolution I was forced to watch this in.

Music (6.0):
The music wasn't terrible and had some funny tracks to play along with action sequences, but there were several times it stuck out like a sore thumb and I didn't think it fit the scenes. It could just be the 1990s Asian OST style though, so maybe it was usual at that time?

Rewatch Value (5.0):
I'm giving this 5 because I'm enough of a sucker for undercover cop stories that I could see myself watching this again at some point in the future. However, I've also got a lot of other options I'd probably choose over this one.

Overall (6.5):
I mean, I had fun watching it, but it's definitely not for everyone. I'd say if you can't enjoy the opening action sequence and ensuing reaming, you're probably going to have a hard time getting through the rest of the movie. However, any issues with this movie aside, I found it enjoyable as a means of scratching my itch for undercover cops in highschool storylines. If that's where you're coming from, then maybe there's a greater chance you'll be amused!
Anyway, it was free on AsianCrush:
https://www.asiancrush.com/video/004477v/fight-back-to-school/

And now let's see if I ever watch the sequels... There's at least a chance for the second one because it also involves high school :)