it's been a very long time since I started loving you secretly.

With this Stalker's Guide I want to show you and of course the MDLers how much I love you.

you are one of Japans most versatile actors. No matter what role you take on you never disappoint your fans.

So I’ll just start writing why I started loving you.

First I saw you in Last Friends.

As the kind Takeru you were always so modest and loyal to your friends. Somehow you just were living that character, not just acting, but living it.

At the time I saw you in Last Friends I was kinda new to dramalands real jewels. I admit Idol actors were the reason why I choose most of my dramas. It was the same with LF. Ryochan was the reason I watched it, but you were what stayed with me up until now. Everyone who likes heavy and not that happy ending dramas should watch you and all the others in Last Friends.

What the drama is about: Its about a group of new friends who all start sharing an apartment. But all of them are traumatized from their previous relationships. Still, they start to slowly grow dear to each other and protect each other. You have to see Ryochans psycho-role.

From here on I’ll just dive into dramaland.

Man you rocked the show!

Your role as Nakaji, the-loved-by-all-guy-with-some-flaws is one of your roles that I loved the most. Somehow since this drama about friendship in the time of social media, I tend to see you as Nakaji.

What the drama is about: Some twitter friends decide to meet up and get to know each other in real life. So the circle of human behavior starts. We get love, hate, disappointment, embarrassment, honesty and trust as a combo. Watch it!

In Soredemo, Ikite Yuku I felt like Futaba (Mitsushima Hikari) wanting to get a new pair of socks for you.

You managed to get the feelings of your character across to us, that I also wanted to grab the knife and….

What the drama is about: A high school boy kills a little girl. The drama is about how the two families cope with the murder even after so many years. And if it is possible for their kids to fall in love despite all the pain?

Thinking of Saikou no Rikon I still want to laugh.

You were so funny Eita. Your monologue’s with the dentists assistant were just hilarious. Really, how did you manage to get into that role?

The role of Hamasaki Mitsuo, who is fed up with everything. Your interactions with Ayano Go, Maki Yoko and Ono Machiko were so well acted.

What the drama is about:  Hamasaki Mitsuo is married to Yuka, but they don’t get along and are always quarreling. Their characters and lifestyles just don’t fit. Mitsuo meets his ex-girlfriend, Yuka divorces Mitsuo and all the story starts up from here.

In Mahoro Ekimae Bangaichi you had yet a different role. Being a poor benriya with a heart of gold.

Tada and Gyoten had such a unique relationship, I won’t just say friendship. You two were more than just friends. Now, Eita in this drama you were the everyday guy with no money and more problems than you could handle, but still, you did what were in your powers.

What the drama is about: Two very queer guys living in a benrya-shop. They will take nearly any job to get Money. You want to see Eita as a wrestler? Go and watch it.

Wow, an all-star cast (like Tsumabuki Satoshi) and you are one of them, Eita. And yet again Hikari Mitsushima.

You as Satou Satoru, the second eldest of 5 siblings and the delinquent of the family, you opened our eyes once more to your great acting. Of course acting alongside such first class actors wouldn’t be easy for wannabe actors, but you…you are just a first class yourself.

What the drama is about: A family of 5-siblings facing everyday life problems like marriage, first-love, love affairs, friendship, money problems etc. This drama is a must not just because of Eita.

A small role, but still important one. As Yashimo Keita you showed us what being a real friend is. You were the funny and honest one out of the friends.

What the drama is about: 5 university friends and their love life I’d say. The main topic is the love of Sae and Kai. Sae is a deaf violinist and Kai had to go on a date with her instead of Keita-kun. Get into this drama and see how Eita and Narimiya Hiroki act as lovers to get rid of one of Hirokis girls.

Now what was that in Waterboys?

Seeing you as the student body president was kind of refreshing. You were young and trying to be a smart-ass, while failing big time. At first you didn’t want the boys to swim, but then you yourself got into it.

Hehehe, it was fun. I hope MDL will allow your swimming pants.

What the drama is about: One new boy comes to school and tries to reanimate the once popular men's synchronized swimming club. It really is a nice watch.

Of course I saw you in other drama as a supporting cast like in Itsumo Futari de, but I’ll just get to the movies.

How do I explain this movie? You are as always great Eita. I really got into the movie and I don’t think I’d love this weird movie if it was someone else than you.

Other movies I have watched with you are:

It took me a while until I could finish your Stalker’s Guide, but I hope it is to your liking.

With all my heart, always your fan 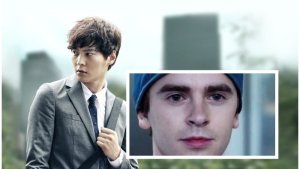 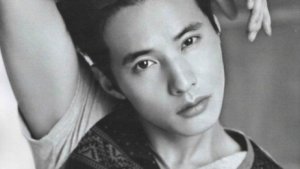 A Stalker's Guide to Won Bin