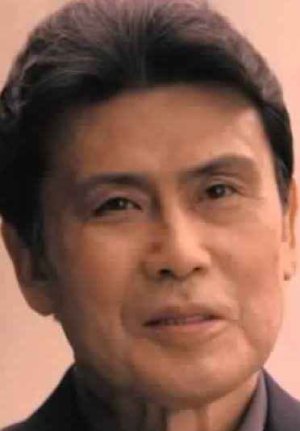 Note about the name: Matsumoto Koshiro is the stage name of a line of kabuki actors in Japan. Most of these were blood relatives, though some were adopted into the family (source: wikipedia)

The current holder of the stage name, Teruaki Fujima was born on August 19, 1942 in Tokyo, Japan.

A graduate of Waseda University, and a versatile actor, K?shir? IX has performed extensively not only in kabuki, but in Western stage plays, film, and television. He has played, among many other roles, Benkei in Kanjinch?, K?chiyama S?shun in K?chiyama, Kumagai Jir? Naozane in Kumagai Jinya, and Matsu?maru in Sugawara Denju Tenarai Kagami.

In 1970, K?shir? appeared in the lead role in Man of La Mancha on Broadway in New York. Also, he has appeared as the King of Siam in The King and I in the West End in London. Other stage roles have included Motl in Fiddler on the Roof, the title role in Sweeney Todd, Salieri in Amadeus, Kitagawa Utamaro in the musical Utamaro, and Zeami Motokiyo in Musical Zeami.