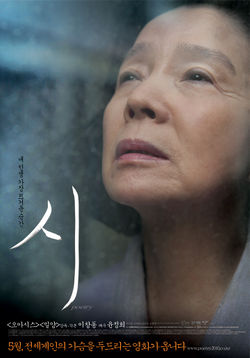 An elderly lady in her 60's works as a caregiver for a disabled man & raises her grandson alone. She has to endure the onset of Alzheimer's disease, through this she tries to fulfill her lifelong dream of becoming a poet. Edit Translation 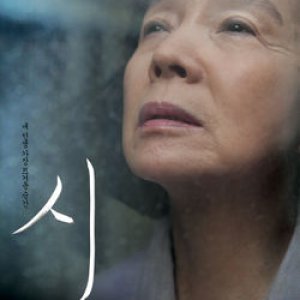 Completed
wlauretta94
11 people found this review helpful
Other reviews by this user
0
Dec 9, 2012
Completed 0
Overall 10
Story 10
Acting/Cast 10
Music 10
Rewatch Value 10
This movie was great, the rythm is very slow so when I started it I thought I was not going to like it, but it was outstanding. It is not a teenager movie, or one of those movie that help you relax, but it is full of meaning, sorrow and reality so it's better to watch it with your clear mind. It definitely shows another face of Korean society, so it's a great movie to learn more about life and about this culture. I recommend it to everyone, but it would be better for people with certain maturity so it would be better understood.
Was this review helpful to you?

The story line is so different from any other Korean movie I have seen. It's usually the older acteresses or actors a usually the grandpas or grandmas in the movies or dramas. But having the older generation as a lead is a breath of fresh air. Even though the older generation having an illnesses are cliche, the way it was done was refeshing as well. Instead of hanging her head down, she stil tries to go on with her life & tries to find who she is before the illness strikes her for good. This story is slow, but I couldn't stop the movie either.

The main actress stand out from anyone else is all I have to say. I liked Ahn Nae Sung's character. But the other characters either didn't really stand out or didn't like their character at all. One character was very creepy! *Cringe* Still thinking about makes me cringe some more. . .

The music was not the best attribute in the movie. I was so intrued by the acting & the story that I couldn't really pay attention to the score.

I wouldn't really re-watch this movie becuase this movie was pretty slow, even though it was good. But there were scenes that I couldn't watch at all. But if I ever re-watch this again, it for the character development of the female lead's character.

Overall, I recommend this movie to anyone who likes movies that have a slow pace, but good story. But you should still watch this is you like poetry, melodrama, & the actress.

New Topic
Be the first to create a discussion for Poetry 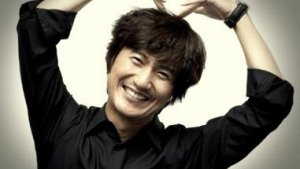