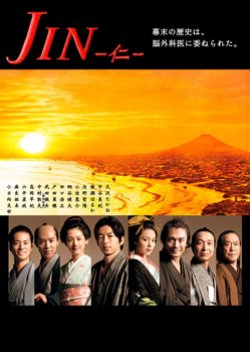 While the Korean version plays more with the romance by adding a male character as love rival, the Japanese version gives a more acceptable reasoning to why the time travelling happen.
1 Recommended by hedwig3
Read recommendations by 2 more users

8.5 Nobunaga Concerto (2014)
Both dramas are about a person time travelling, ending up in Sengoku period. Both are based on famous manga. Both are very similar.
0 Recommended by Aoi_Takahashi_12
Read recommendations by 1 more user

-Both travel back in time to japanese feudal period and have to improvise with techniques of the past, using their knowledge from present.
0 Recommended by dhaliahn

8.6 JIN 2 (2011)
Literally the second season of JIN. Just focuses on his internal struggle and how with every life he saves he could be causing someone else to fall in their place, or only prolonging the inevitable.
0 Recommended by Aliyah

8.1 Code Blue (2008)
Both are inspirational medical dramas.
0 Recommended by bannie

8.2 Faith (2012)
Time-traveling and doctors that change the fate of the past.
0 Recommended by claudya87