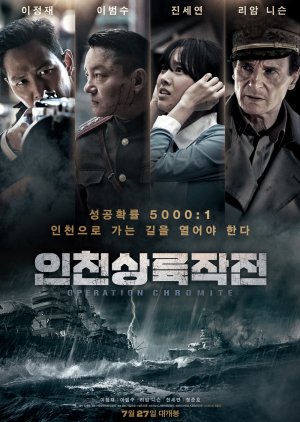 Completed
xXabsintheXx
4 people found this review helpful
Other reviews by this user
0
Jul 13, 2017
Completed 0
Overall 8.5
Story 8.5
Acting/Cast 9.0
Music 8.0
Rewatch Value 6.0
I went into this movie with not too high expectations because even though it was such a big project, Korean dramas taught me to still be careful with what I wish for. Well, I can't say that this movie was in any way a letdown. It was definitely not.

I'm always up for a good movie that is based on historical facts. Operation Chromite is not only based on true events but dedicated to the families and descendants of those heroes who are portrayed here. I am not a historian, so I can't assess to its historical closeness. But I do want to believe that the producers were very accurate with the details. And honestly, I don't think there could have gone much wrong either.

The story takes up pace very fast, you don't get bored over long conversations. Instead you have to concentrate alot because scenes change very fast. You blink once and half of the movie has already passed. You blink twice and the movie is already over. Every now and then it has some nice, calm and either heartwarming or heartbreaking moments as well, which is an important asset to make this movie work out the way it wants to be and to deliver the right feels.

Because this film's strength is not the action - although there's alot of that - but the people and their desperate fight for their country. Their determination and desire were infectious and moved me every single time, even though those moments were rare. The cast was delivering such a good job. There are so many really good actors and actresses in this movie that of course not everyone could get a main role. But that doesn't mean that their performances were less important than others. Even though their screentime was limited, they got the best out of themselves and brought forth some nice, raw emotions.

Despite its brutal reality, cinematography was at its best. Beautiful shots and colors that supported the storytelling and its emotions in a caring way. I'm also sounding a note of caution here for all those who are sensible to gore. Although the film is keeping it at a short leash, there are still some scenes that might upset one or two stomachs.

One thing I was bothered by (next to some other things) was first of all Liam Neeson. I know that he's a really good actor and I don't blame him here. But his scenes always seemed kinda choppy and cut off. There was no smoothness in his dialogues either. Only in close-ups his acting could truly shine which made me appreciate his appearances a little more.

Another thing that irritated me was the background score. I'm a sucker for good background music and Operation Chromite does have a great score actually. But it was so badly placed and overused in Liam Neeson's scenes that it almost lost all its impact and disrupted the in other places always well balanced story-flow. All the scenes with the Korean soldiers for example were stunningly coordinated and fluent which makes it such a shame that it didn't work out with his parts.

Overall still a nice and lasting watch that I would definitely recommend.