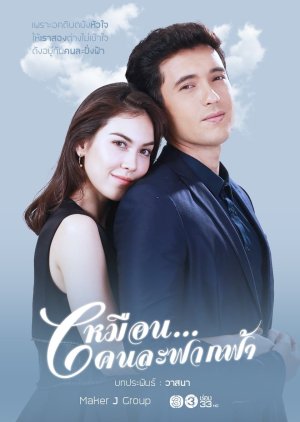 When Yothaka's mother marries Chatcharun's rich father, Chatcharun is not happy. He believes that her and her mother are both gold diggers. Also, Yothaka has just returned from abroad and has a care-free "western" attitude. She is a rebel at heart, while Chatcharun is conservative. Along with believing she is a gold-digger, he also thinks she is "easy". She encourages that misconception just to annoy him. He harasses, she teases. They bicker. A lot. ~ A remake of the 1995 drama. Edit Translation 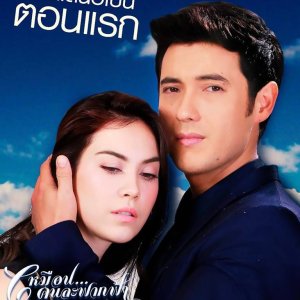 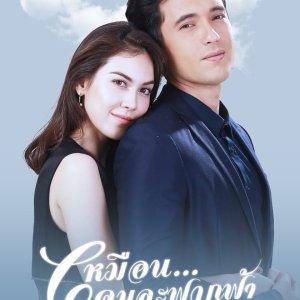 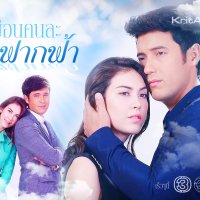 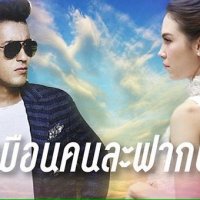 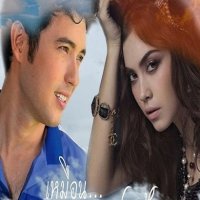 Completed
anopinion
15 people found this review helpful
Other reviews by this user
0
Jun 6, 2017
13 of 13 episodes seen
Completed 0
Overall 7.5
Story 6.5
Acting/Cast 9.0
Music 8.5
Rewatch Value 8.0
This review may contain spoilers
I have really conflicting feelings for Meuan Khon La Faak Fah. On one hand, I appreciated how it started, how the female lead is strong and cute, and how much chemistry our lead couple had. On the other hand, I thought the plot was weak, there wasn't enough emphasis on the main leads, and the ending seemed too hasty as well.

Where should I start? I think on the whole the acting was good. I found Andrew Gregson really awkward with his hand gestures, but I can totally see how that ties in to his character. It's just an unfamiliar sight for a male lead to be so... childishly adorable (...) . He's absolutely fantastic in the more emotional scenes though. Matt Peranee was really cute. I wonder if all the "oppa" references were actually ad-libs on her part. In any case, the female lead was an easy character to root for (at least at the start). They also had exceptional chemistry with each other. The lunch scenes were so heart-tingling! It's a pity that their scenes got lesser and lesser, and the drama went into a makjang spiral at the end [1].

It may be because I'm not that familiar with Thai dramas, but this is one of the rare instances where I found the youngsters acting better than the veterans (youngsters and veterans are relative really, but you get the idea). Midway through the drama I got this vibe from both the father and the housekeeper that they are actually villains, but they are obviously not. The aunt was overacting so much that it actually became sort of funny.

The plot was a little meh. For a drama about romance, they spent too much time on the angst. It'll be better if the angst gave the leads some screen time, but the angst gave the supporting characters too much screen time. By the end of the drama, I just skip-watched all those portions. Episode one was so-so, episode two and three dragged me in, but at the end I survived only by crumbs of the sweet OTP moments. I think the best thing that happened to the drama was possibly the editing of the preview. I swear in every episode I think the next is going to be better and full of cute scenes, but yeah. Also, I'm a little piffed at how they wrapped up everything so hastily. They got together in the end alright (this is totally not a spoiler), but it was a little underwhelming and the flashback was way way way too long. It's almost like they decided to re-edit the OTP scenes into a whole new MV for the opening theme.

Also, the kiss scenes. Wait, I mean the lack of kiss scenes. I know how Thai dramas are like with my few experiences. There's virtually no intimate scenes at all, not the lip-on-lip kisses anyway. Even if there is, it's just them manipulating angles. Usually, I don't really mind it. On second watch of the MKLFF episodes though, I realise that there wasn't even a peck anywhere. I'm completely fine with watching them on the same screen doing nothing except eating and talking (the lunch scenes were really the highlights of the drama), but if you are going to have a kiss scene do it properly. For the forehead "kiss" in the last episode, Andrew Gregson was just kissing air lol. Like whaaaat? It's just the forehead! I'll admit that I wasn't watching properly the first time and got tricked though.

All in all, despite my complaints, I actually think this is a decent drama. Perhaps it's because I just came from a horrible one [2]. I feel the start and the interactions between the leads were really refreshing, and even though it went downhill, it didn't erode my fondness for the drama. It's probably also because of my impression that Thai dramas are in general overly theatrical. This drama actually scores lower on the makjang scale compared to the others I've watched (and tried to watch). I also have a personal preference for dramas with stronger female leads as well so there's that.

[1] I wonder how much of this is due to the fact that this is actually a remake and they had to somehow follow the plot. From what I understand though, it's nothing like the original version. I think they probably should've done away with the not-so-great plot points and kept the better ones, but I really have no idea what the original was like.

[2] For those who are curious, that terrible drama is the Thai adaptation of Princess Hours.

Completed
Trouble-chan
4 people found this review helpful
Other reviews by this user
0
Feb 24, 2018
13 of 13 episodes seen
Completed 0
Overall 8.0
Story 8.0
Acting/Cast 8.0
Music 8.0
Rewatch Value 7.0
This wasn't terrible.   It was actually nice to watch a Thai Lakorn that didn't resort to the old 'slap/kiss' and even rape or attempted rape to get the story moving. Andrew Gregson was actually good as Chat - sure he wasn't all macho and mean, but that was the point.  He was a damaged soul but one that didn't feel the need to rape, slap, or brutalise the woman he 'loved' to get her to care about him too.  He was kind, thoughtul, a bit pushy sure but nothing like we're used to.
Sure it was indeed slow in places because it didn't have the usual 'girl runs, man chases her and slaps/kisses her into submission' sections and, despite everyone saying they were speaking their minds to save misunderstandings, no one was actually doing that with anyone right up until the end.   Lies and deflection seemed to be the order of the day; which will drive some viewers mad as you scream "for God's sake just TELL <insert name> the TRUTH!!"

The 'villains' were annoying to the point where death was too good for them.  Even their insults were lame compared to the lead female and her grandma (who I  ADORED)  As the elderly villains went in this I'd have just thrown them under the bus so hard I would've won a prize LONG before the end.  Having said that there was so much plastic in their faces you could've just stood them next to an open flame, hell even a lit match would've worked, and watched them melt like the Wicked Witch of the West.

As to their seeming teflon coating when it came to get rumbled,  I know families love each other, blah blah, but come ON!  there's a limit to how far familial loyalty will go (especially these days) - if my mother in law tried to ruin my daughter's life, rest assured she would be supporting a new patio in my garden in a more literal way than she should.  I do get that Lakorns have to be angsty - I get that adult kids have to be tortured by parents/grandparents/older or younger siblings/ or even just insert random person who wants revenge here for the story; but really when the parents are supposed to be 'protecting' their tortured offspring, then they should DO that not just pay lip service to it before pressing on with tweets of '#worried' to everyone.  I also loathe the Second Lead in these (usually the female who is NOT a villain) who just wafts around a with a 'kicked puppy' look.  In this drama that girl had that look NAILED - seriously, there are puppies out there as we speak taking lessons from her it was that good....sadly, though I just wanted to slap her silly, shake her so hard her teeth rattled and then tell her to GROW.A.SPINE.  She is a grown woman, running a business; NOT a 2 year old who's just been told her favourite blankie has been put through a woodchipper.

The music is pretty good and the theme song is nice too.  The re-watch value isn't awful because you know which bits to avoid, but it's not a must-see.  Overall, this isn't as bad as some people say and I'd give it a solid 8.