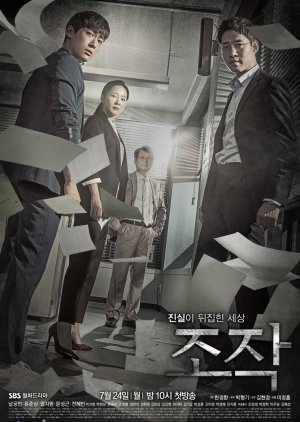 8.5 Mad Dog (2017)
Both dramas
-is about a team searching for a painfull truth full of intrigue!!
-have a plot which is getting better and better after each episode!
-have a similarity in the illegal way their leads getting their information.

8.5 Pinocchio (2014)
1. reporters kind of drama
2. 2 news company involved
3. core concept is based on the false content of the news
0 Recommended by Nabi

8.1 Big Issue (2019)
They are both about journalist, prosecutor. The characters work together to reveal the truth to the world
0 Recommended by marcherz

8.4 Argon (2017)
There aren't tons of dramas focused on the role of media and journalism in today's world, especially with information at everybody's fingertips. Falsify tackles media in a similarly impactful way with a very different storyline and pace but the overall message about how the media must be honest and unbiased in their work for the common everyday people remains the same.
0 Recommended by bridget

7.3 Hero (2009)
Both have similar elements, with a rogue tabloid (funded by a gangster boss) along with a driven female law enforcement character going up against a large paper (with a corrupt boss) to uncover a larger conspiracy; both are about how media shapes pubic opinion and the moral dilemmas that go with reporting. (But Hero is way better written/acted, and for being made 8 years earlier, way less cliche!)
0 Recommended by usagisaiko

9.2 The World Between Us (2019)
The reporters and news team are under pressure to quickly put out stories before the other networks to top the TV ratings game. Reporters struggle to separate the real from the fake stories. Both dramas involve prosecutors as main characters. Both are thrillers.
0 Recommended by SUNNY