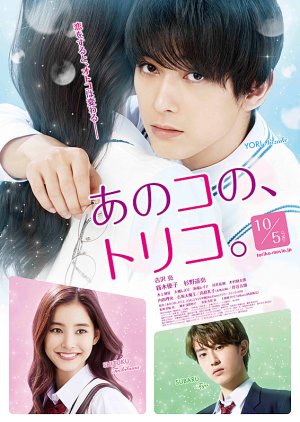 Completed
YoshihiroStepper
11 people found this review helpful
Other reviews by this user
1
May 11, 2019
Completed 1
Overall 9.0
Story 9.0
Acting/Cast 10
Music 9.0
Rewatch Value 9.0
The main focal point of this movie is the sheer devotion the male lead Suzuki Yori has for his love interest. Usually, when characters are obsessed with their love interest they become really creepy. This wasn't the case with this movie. His dedication is heartwarming. Everything he does is for her. Another main focus of this movie is how the male lead looks like a nerd but he's actually a super hot guy. Kind of like an ugly betty type deal. I think the casting was great for this film. Everyone played their roles so nicely. Also a little side note that I noticed while translating was that the Kanji character for Yori means reliance. Which encompasses a huge part the male lead Suzuki Yori. Please give this movie a watch guys. It's really good. ;)

Completed
PHope
2 people found this review helpful
Other reviews by this user
2
May 11, 2019
Completed 2
Overall 6.0
Story 6.5
Acting/Cast 8.0
Music 5.0
Rewatch Value 4.0
Anyone who had watched "Wolf girl, Black Prince" would remember the second lead, who was overall geeky but when he took off his glasses looked droped dead gorgeous. Well, this movie is the live action of that (and with the same actor).

So, what I liked about this movie was the choice of actors. All of them were perfect for their parts and therefore, they added a lot to the movie. Their performances were good as well.

As for the story, here's what desappointed me. Maybe it was because I was really looking forward to this movie. And the start was admitadly good. But the ending was cheesy, kind of rushed, and over the top cliche. I guess they didn't manage the pace very well.

Completed
KoreaGirl
2 people found this review helpful
Other reviews by this user
0
May 17, 2019
Completed 0
Overall 7.5
Story 7.0
Acting/Cast 8.0
Music 6.0
Rewatch Value 6.0
... if you're like me and enjoy that kinda thing, you'll enjoy it. I mean, it's not brilliant but its an easy watch and I liked the actors. The ending seemed a bit rushed but in my limited experience, it's often the case with these kind of live action.

Yes its predictable. You can see the ending a mile away but sometimes you want to watch something that won't surprise you or upset you at the end. You just want a bit of fluff :)

If you're looking for something to pass the time that won't make you cry and has a cute but nerdy lead actor - give this a try.

Completed
Tokki Jangnim
0 people found this review helpful
Other reviews by this user
0
Jan 5, 2020
Completed 0
Overall 7.0
Story 6.5
Acting/Cast 9.0
Music 7.0
Rewatch Value 6.5
This review may contain spoilers
If you're looking for a fluffy, cheesy romance this is for you. But if you're looking for a 'fun but has a deep plot' movie, then I'm not recommending this to you. I love all of the casts and their professional act. But what I'm not quite satisfied within this movie, is the shallow character for Shizuku & Subaru.

I honestly don't know the reason why Yori wanted to abandon everything to pursue her dreams? I know his character was kinda the same like Kotoko (Itazura Na Kiss Franchise)-someone devoted their life for their loved ones. But at least give us the reason tho. Kotoko loves Irie bcs he's smart, handsome, etc. But what about Shizuku? I'm sure that the manga will tell me a lot better explanation abt Shizuku's background. In this movie all she did was to smile (Thank God her smile was angelic), complaining to Yori, didn't do her job professionally, even tho her character has such a huge potential on the beginning of the movie. I thought from the trailer she's one of that fierce & tough female lead character, but I was wrong..Her character was not strong enough for me..But the cast did the acting beautifully.

I also hated Subaru's character because the script writer didn't even gave the character to explain his reason why he actually felt inferior to Yori & did all of that nasty things to Yori. His character was only to give pressure & sense of rivalry to Yori. I was not even feeling a fair competitiveness between them. How come Subaru was portrayed only as a jealous boy with Shizuku? The cast deserves more spotlight & character development. Honestly put it simple, it was just kinda feels rushed out.

What I love abt this movie is the part when Kondo PD character could support Yori as a rising actor & how Yori could get out from his 'cage' & flew away to pursue his (Shizuku's) dreams.

This movie has huge potential, but I don't see them being executed wisely. Props to the cast, but I think I would not watch it again. This is a perfect movie for you who just wanted to quickly spend your time. Would rate it 7/10.