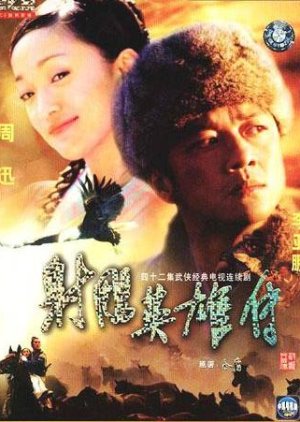 Based on the novel "Legend of Condor Hero" by Jin Yong, the story is set in the middle of Song Dynasty and at the beginning of the Nuzhen Invasion of China. Two dedicated Song Dynasty young men, Yang Tie Xin and Guo Xiao Tian find out that their wives are pregnant. They promise each other that when their children are born, they would become either sworn brothers or sworn sisters (if both are the same gender) or be married if they were of different genders. One night they befriend a Taoist priest named Qiu Chuji of Quan Zhen Sect who's wanted by Jin soldiers. Qiu Chuji dispatches soldiers coming to arrest him with ease and leaves when he sees a signal of his Sect appear in the night sky. Yang's kind hearted wife, Bao Xirou, rescues a wounded man who turns out to be the Jin prince Wanyan Honglie. When the Jin soldiers return, the two families are torn asunder. Wanyan Honglie takes Bao Xirou to the Jin capital while Guo Li Ping is taken by a greedy Jin soldier, Duan Tiande, to the Mongolian outskirts. Both women believe that their husbands perished trying to save them. Upon discovering his friends' demise, Qiu Chuji vows to find their children and teach them martial arts so that they can avenge the wrong done to their families. Hot on the trail of Duan Tiande, Qiu Chuji "befriends" The 7 Weirdos of Jiangnan. In exchange for helping Qiu Chuji find the two women, they make a friendly wager. Upon finding the children of Yang and Guo, each side will teach the child they find their martial arts. On the 18th birthday of the two children, they will all gather and have the two duel each other. The rest of the series depicts the trials and tribulations that the two sons underwent. Guo Jing, Guo Xiao Tian's son, grows up in Mongolia under the protection of Genghis Khan. Yang Kang, on the other hand, grows up as a prince in the Jin Empire. Edit Translation 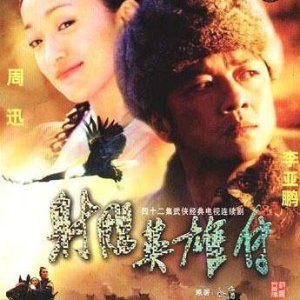 Completed
tenoh27
3 people found this review helpful
Other reviews by this user
0
Oct 9, 2017
42 of 42 episodes seen
Completed 0
Overall 8.0
Story 9.0
Acting/Cast 8.0
Music 8.5
Rewatch Value 8.0
This version, out of the numerous adaptations of the same Jin Yong saga, the “Legend of the Condor Heroes”, is the least popular amongst those made in the last 30 years. However, this review was written with the hope that this version will receive more positive attention, as it is certainly deserving of it, being an earnestly and beautifully produced and directed show which did the fantastic saga justice.


Story
Story-wise, this was one of the most faithful to the saga in the novels. It was also relatively well-executed. Hence, the plot, story and execution were the strengths of this adaptation. However, it was not without flaws as the show focused on certain parts of the story more than others, resulting in an imbalance (as per the story in the novels). If one is not too nit-picky, that was still one shortcoming which can be overlooked.

Particularly worthy of note was the period while the story was based in Mongolia. There was more emphasis on this phase of Guo Jing’s journey in this version than there were in the others, and the care taken were admirable. If there is an absolute I dare assert with regard to the adaptations, it is that the 2003 version had the best Mongolia-based-phase out of all existing adaptations, no ifs-or-buts about it. It was truly fantastic, even with the inevitable flaws.


Cast/Acting
There were many criticisms and controversy with regard to the casting, especially for the main leads. However, while everybody has their own preferences for actors/actresses and their interpretations of the characters, personally, I found the acting and interpretations to be solidly competent and robustly interesting. I loved the Huang Rong and Guo Jing here. The only main issue I had was with Yang Kang and his actor, whom I thought overacted most times.

The rest of the cast also did very well and left a deep impression. I particularly appreciated the presence and gravitas some of the more veteran actors and actresses brought to the secondary characters, especially the more major characters of the wuxia masters.


Action sequences/CGI
While there were some annoying overuse of CGI, overall, I thought the usage was appropriate for the scenes they were employed in, and did not unnecessarily overshadow the more traditional kungfu moves during the same action sequences.


Cinematography
The cinematography here was simply breathtaking, with shooting locations spanning the breadth of China from the north to the south, giving a sense of deep realism to this version that moved me. In tandem with that touch of realism, the framing used also brought out the ethereal aesthetic of a black and white ink painting in many scenes, lending many scenes a sense of immersive beauty.

This version used a palette of muted and darker colours for its scenes, lending a dirtier, grittier and more epic feel to the whole show, which really matched the wuxia genre, I thought. Not only that, it lent a tinge of tragedy and bittersweetness throughout. While the story was a somewhat positive exposition on the journey of a patriot-hero, it was also a story littered with deaths and tragedies, and I applaud the show for not shying away from this sense of sadness through its visual presentation.


Costumes
The costumes and set pieces utilised here could be considered simple and drab, but were actually custom made for the show based on historical records and the novels, and here too, the effort to be true to its source material and historical background was clearly shown.


Music
While the tracks used here would have their work cut out for them in topping the nostalgic impact of the TVB adaptations’ theme songs, I never once thought it paled in comparison. The opening theme song, “Heaven and Earth Are in My Heart” was a marvelously epic encapsulation of the whole ‘hero’ journey, and the ending song, “True Love is Beautiful” was a lovely sentimental ballad which could well ensnare your audio senses. The musical score employed throughout the show was also suitably impressive - compositions which were predominantly classical Chinese instrumentals - elevating the impact of many scenes.


Conclusion
This is the least pretty adaptation so far, with an intensity and realism that made it a more plodding viewing compared to other versions. However, it was the one which I thought captured most concisely the essence of the saga as written in the novels - from story, acting, backdrop, feels, props to cinematography - which was essentially a distillation of the idealisation of Confucian values through the epic journey of Guo Jing. Hence, this version resonated deeply with me, and has remained my favourite out of all the ones I have had the pleasure to watch. It is truly a masterpiece worthy of its source material.

If dark, gritty and epic is your cup of tea, the 2003 version is highly recommended.

If a slightly revisionist-story, specific/well-known actors/actresses and general prettiness are your preference, the 2008 version might be a good choice.

If bright, pretty, romance-weighted and ‘idol-ish’ are your preferences, the latest 2017 version would be a fine choice.

If a good story, wonderful acting, nostalgia and simple curiosity (as to why they were such beloved classics), the early-1980s TVB/HK-versions are a must.

The 1994 remake from TVB would also be a solid choice. Good acting and overall lovely drama.
(This was the series where I first fell in love with the saga and characters, and a well made adaptation which did not veer off too much from the source material. Sometimes, first love doesn’t always leave the most lasting impression, and I am glad for that).