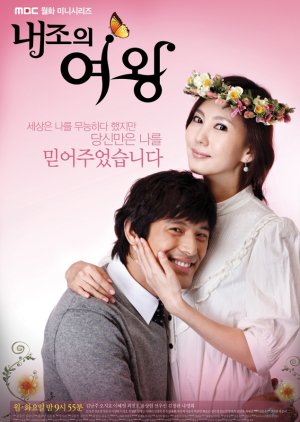 Chun Ji Ae and Yang Bong Soon are high school classmates who did not have the best relationship with each other. Ji Ae was the most popular girl in school whereas Bong Soon was the girl that was always made fun of. Years later, their roles are reversed as Bong Soon's husband, Han Joon Hyuk, is very successful whereas Ji Ae's husband, Ohn Dal Soo, is just an average company worker. Things get complicated when Dal Soo starts an extra-marital affair with his boss's wife, Eun So Hyuk. How will Ji Ae react to this? Edit Translation

Where to Watch Queen of Housewives 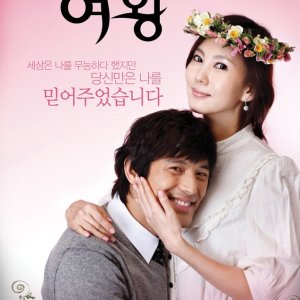 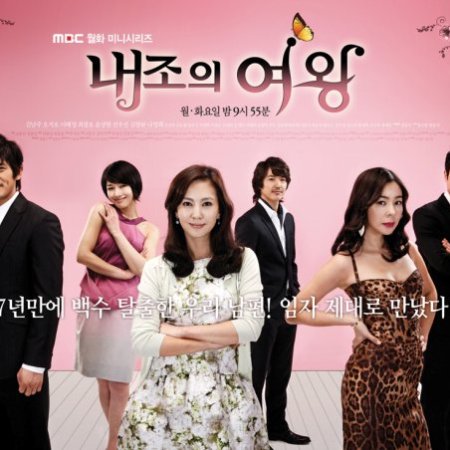 Completed
Junebee
10 people found this review helpful
Other reviews by this user
1
Jan 8, 2013
20 of 20 episodes seen
Completed 1
Overall 10
Story 9.0
Acting/Cast 10
Music 9.0
Rewatch Value 8.0
Really enjoyed this drama. If you are a fan of Yoon Sang-Hyun, as I am, this drama is required viewing. The role of Heo Tae-Joon was pivotal in launching Yoon's career in acting. I thought all of the actors were very good. I even wanted to hug Kim Nam Joo, so convincing she was when emotional as wife Ji-Ae.

The story was involved and moved well. The first few episodes seem very banal but the plot does get more complex as the lives of four couples are fleshed out throughout the story.

I think this drama is underrated in drama land, as there isn't much mention of it elsewhere and mine is the first review posted on MDL.

Completed
Fraxer
4 people found this review helpful
Other reviews by this user
0
Jul 7, 2015
20 of 20 episodes seen
Completed 0
Overall 7.0
Story 6.5
Acting/Cast 7.5
Music 8.0
Rewatch Value 1.0
So I finished watching the drama and the question I'm asking myself is,"Why did I watch it?" I'm neither fond of such stories nor am I a big fan of any of the actors. I just somehow ended up here from Queen of Reversals and decided to give it a try - and I finished it before I knew it. Does that mean I enjoyed it? Not really, lets just say I had too much time on hand and nothing better to do!

It's more or less about office politics involving the workers and their wives. Just to give a basic premise, the story of the two high school classmates is introduced. There is a severe dose of unhappiness in married life and extra-marital affairs, which frankly, I'm not a big fan of. Romance is limited and often in the wrong place (there was some cheesy romance between Bong Soon and Joon Hyuk near the end). I wish the cat fights between the female leads had some humor in them, but it leaves one disappointed and irritated at times. The ending was kind of orthodox (feel good? maybe).

The actors did a decent job, but most of the characters were not lovable. There are times you feel sad for Ji Ae and Bong Soon, but they were short-lived for me. A couple of good songs in the background manage to salvage something.

Rewatch value is very low coz I doubt anyone would ever rewatch this (lol!)