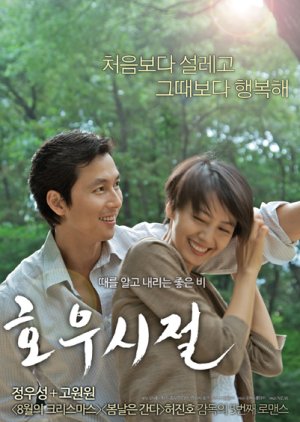 South Korean student Dong Ha met Chinese student, May, while studying in America several years back. The two students became friends but didn't realize the bond they had until they went their separate ways. Now as an architect, Dong Ha travels to China in lieu of a business partner to work on a construction project. By coincidence, Dong Ha runs into May again and they share their memories spent together as students in America. Dong Ha and May fall in love once again ... Edit Translation 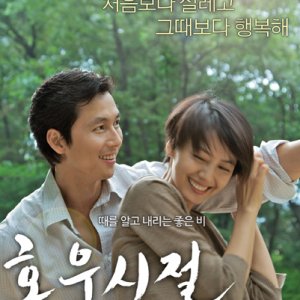 Completed
PrettyCarEye
12 people found this review helpful
Other reviews by this user
2
Nov 22, 2012
Completed 2
Overall 8.0
Story 8.0
Acting/Cast 10
Music 7.0
Rewatch Value 10
Jung Woo-sung brought me to this movie and let me tell you, I wasn't disappointed. The man is a vision. But his pretty face isn't the movie's only merit. Though not the most original of scripts, it served its purpose of entertaining me for a couple of hours. It's a cute, light-hearted story about rekindling a friendship that eventually leads to love.

I enjoyed the cross cultural elements of the film. There was a time, in my ignorance, when I thought all East Asian cultures were more or less the same. I have since broadened my horizons, but it was still quite interesting to see that China was just as much a cultural novelty for Dong-ha, a Korean, as it would've been for me, a Westerner.

What's more interesting is that a great portion of this film is in English because Dong-ha doesn't speak Chinese and May doesn't speak Korean. I must admit it was a bit weird for me to hear them speak English so I muted the sound and simply read the subtitles. It's not that their English was poor. Actually, they were as good as anyone can speak a foreign language, but their accents were really heavy. I found that it distracted me from the emotion of the story and the performances.

I'm thankful this movie wasn’t too emotionally draining. The few times it reverted to more somber themes, those were quickly overruled by one comedic scene or another.

Dong-ha and May had mad on-screen chemistry. There were some very steamy kisses in this movie, and May was a full participant in all the action! No shocked, open-eyed reaction here. For once I can't complain about the intimacy between the characters being fake. My only wish was that those kisses were more frequent and longer! haha :)

Overall, I have very few complaints. This was a simple, but satisfying story with good, subtle performances from a pair of very attractive leads. I doubt I've ever seen Jung Woo-sung look so handsome on screen, not even in A Moment to Remember (and let’s face it, the man was pretty darn hot in that movie!). The ending was unnecessary. I would have preferred a different outcome, one that was a bit more straightforward and less open, but it didn't spoil the movie for me. It's clear that the director just wanted to be a jerk and yank our chain.

I highly recommend Season of Good Rain as the perfect date movie. It’s a light romantic drama that’ll make you reminisce about when you first met your love, give you many reasons to make out and offer you something light-hearted to debate about after it’s done. Enjoy!