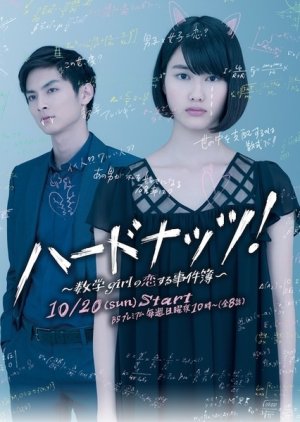 Completed
hiphop123
7 people found this review helpful
Other reviews by this user
2
Aug 13, 2014
8 of 8 episodes seen
Completed 2
Overall 9.0
Story 9.0
Acting/Cast 9.0
Music 8.0
Rewatch Value 8.5
Even though the drama was short, I loved every minute of this drama. I was waiting for this before it aired and I was hyped.

I am glad that I ended up watching this drama. There were math problems that I have never heard of before &amp;amp; the cases kept you interested.

The thing is I love the leads! They so opposite of each other, but they make a great team. I haven't seen the female lead in anything before, but she was great. I think I have seen the male lead before, I don't remember which movie or drama that I have seen him in, but he is a great actor as well. He is also hot. . . I had to say it. . . The only problem with the drama is that we didn't get to learn much of their background at all. They have great chemistry despite the age difference. But don't let that turn you away from watching this drama.

The music fitted in the right spots, theme is catchy, but I don't remember much since it was a long time ago when I watched this drama last year(2013).

I would re-watch this again when I have time.

Overall, I definitely recommend this drama if you like crime genre, math, comedy & cases that keep you guessing, then you will like this one.

The only complaint besides the one I mentioned above, is that it should of been longer.

Completed
Alice
8 people found this review helpful
Other reviews by this user
0
Apr 22, 2014
8 of 8 episodes seen
Completed 0
Overall 6.0
Story 7.0
Acting/Cast 7.0
Music 9.0
Rewatch Value 1.0
I have mixed feelings about this drama. While it started off okay, the ending left a lot to be desired. I didn't really enjoy this drama as much as other detective dramas such as Galileo or Brain.

Like other reviewers, I agree the acting was really good. Everyone portrayed their characters realistically and consistently. The actress who played Kurumi, Hashimoto Ai, was especially good at showing both her ditzy and intelligent sides.

The story and plot was all right. There was no exciting twists, though the villains were pretty unique. It was just your standard police procedural drama.

For me, the drama went off the rails towards the end, with no explanations for the events that occurred and leaving some subplots unresolved. There were some implications about one character's past that seemed to come out of nowhere with no setup or foreshadowing. The end strongly hinted at a Season 2, so maybe things would get resolved then.

Overall, this drama was meh. It has some great elements, but they weren't executed to their greatest potential. Some of the storytelling choices, especially at the end, make no sense, which soured my feelings towards the drama.

Completed
K-Popper
6 people found this review helpful
Other reviews by this user
0
Dec 9, 2013
8 of 8 episodes seen
Completed 0
Overall 9.0
Story 8.0
Acting/Cast 9.0
Music 7.0
Rewatch Value 9.0
This is my first Review so please bare with me and i apologize is this seems out of order.
Even though I have only watched 5 of the 8 episodes of Hard Nut, I feel that i should share my view of this Japanese Drama. And that is that it is a brilliant police drama that makes mathematics look fun and simple to apply to daily life. I can't wait for the final 3 episodes to be released so that i can see how the whole situation between the two lead roles turns out.

The main female role is portrayed by Hashimoto Ai, and even though this was not her first main role over all it was her first main casting in a drama, i feel that so far she has played her role well and really makes it her own. Her character kurumi Nanba is a little ditsy but very smart and that is the type of personality i personally like in a drama (the ditsy part) as it allows us to watch as the character progresses and develops into a new person.

The role played by Kora Kengo is the young police detective Tatsuhiko Handa who works together with this strange Tokyo college student who helps his solve crimes. His character seems to be sharp and uncaring on the out side but there are moments when you see under his outer skin and see just how caring he is. Its like he has his own awkwardness to work through just like Kurumi Nanba.

This drama is still airing and waiting has never been my strong point so i usually wait until a drama is completed before watching it, but for this drama i feel i can make an exception as i really enjoyed watching the first 5 episodes it feels like the wait will kill me.
however, i do dislike how Kurumi Nanba acts when she is by her self at first but she grows on you the more you watch her.

Completed
Bodea
1 people found this review helpful
Other reviews by this user
0
Mar 2, 2015
8 of 8 episodes seen
Completed 0
Overall 8.0
Story 8.0
Acting/Cast 8.0
Music 6.5
Rewatch Value 7.0
I wish this drama had been longer, even just one more episode of Kurumi and Tomoda would have been great. I thoroughly enjoyed everything about this one.

I loved the leads together. They were funny and were really well together. I really got into their characters, Nanba more so than Tomoda because I felt like the filled in all the blanks.

The story for each ep was great. I felt like it kept the flow going and they did a fairly good job building Kurumi and Tomoda's partnership. I also really liked how Kurumi went about using Mathematics to solve the case. Her methods seems off at first and not exact, but it all came together nicely in the end. The one thing that bugged me about the story was how they handled Tomoda's background. I felt like they could have put more into it and given us more.

The romance here is light, but it's fun too. I find Kurumi's thoughts about Tomoda and how to snag a guy hilarious and I love the way he responds to her antics. All in all, this is a nice and quirky detective drama in the sea of detective dramas coming out of Japan. It's got it's own charm and for that alone I rec it.

**As a note I love, love and live for tantei's. Japan does it best.

Although, I can say Korea's Bad Guys is something special.

I completely ship Tomoda x Nanba. I felt that Hashimoto Ai (Nanba) and Kora Kengo (Tomoda) had amazing chemistry. Their chemistry is something I haven't seen since Galileo S1 between Fukuyama Masaharu & Shibasaki Kou.

Tomoda-Kun is a detective with a fairly amiable personality, who appreciates intellect and the rule of law. He is also someone who has a rather nefarious background, making his approach to crime   different from the normal methodology enforced by Japanese police. He's very much like American detectives with their informants and some of them knowing and having relations with the criminal world. So danger lurks between the duality of his existence---one between law & crime. He appears to be in his late 20s or early 30s---I'm leaning early 30s based on his position in the police station and his status amongst his family. When I say status---you'll understand what I mean when you watch the drama.

Nanba-san is a young girl with a super quirky personality. She's in her late teens or early twenties. I wasn't sure if she was 19 or 22. I feel like I saw both. I just know she's not old enough to drink. I just looked it up, since the legal drinking age is 20, Nanba is 19. She is loud, obnoxious, has no sense of danger, rebellious, has no common sense---basically she's DareDevil. This girl will make give you life while leaving you bewildered at her explanations. Yeah, I had to rewind a few times to get where she was going. She also is part of the math program at the elite Tokyo University.

The two characters played off of each other well for two reasons: 1) both have a past that they are trying to escape or deal with; 2) one is clearly jaded and has a shady life while the other is naive and lusts for action. It's like for Nanba---Tomoda makes math fun and exciting while for Tomoda Nanba rejuvenates that jaded facade. Additionally, as far as the story goes, Tomoda never really seemed overwhelmed or looked stupid when Nanba would go on her mathematical spiel.

Basically he stood toe to toe with her and they were equal. They both brought their skills in regards to every interesting crime that's presented and that has to be appreciated. Also, the flow of the particular crimes seemed to escalate in danger from the first episode to the last. Which I think adds to the appeal. Most people didn't recognise that.

Anyway, the story is great, you can relate to the characters in different ways, and there's enough quirkiness which brings a lightness to the dark without making it absurd and worth watching over and over again. I definitely recommend this drama.