Ingtoogi: The Battle of Internet Trolls (2013) 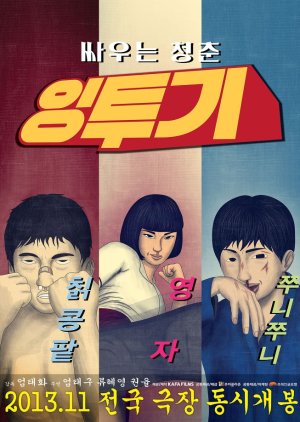 Tae-Sik (Um Tae-Goo) is a member of Korean online community. He goes by the user name of “Chitkongpot”. Tae-Sik is in a flamewar with another user named “Jutjonseun.” One day, Tae-Sik is surprised attacked by "Jutjonseun" in person and gets physically beaten by him. The assault is recorded on video and it quickly spreads on the internet. Tae-Sik decides to get revenge on “Jutjonseun.” He begins to take ultimate fighting lessons from his friend Hee-Joon (Kwon Yool). There, Tae-Sik meets a girl fighter named Young-Ja (Ryoo Hye-Young). Edit Translation 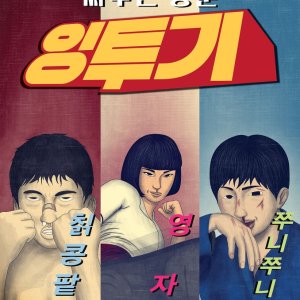 Completed
Senpai
2 people found this review helpful
Other reviews by this user
0
Nov 9, 2017
Completed 0
Overall 7.5
Story 6.0
Acting/Cast 7.5
Music 7.0
Rewatch Value 6.0
Fights without limits Online.
A younger man is humiliated when he is beaten by a person. It  turns out that these two had argued over the Internet, and the younger  man was fooled into a meeting that turned out to be a heavily  humiliating filmed and of course posted on the Internet. Now he is looking for revenge and he plans to train martial arts to find his rival again in the ring.
There are many who advocate the Internet, it is easy to be difficult behind a keyboard and screen. After what I understand, in recent years there has been a trend in which the warriors meet to fight. This is the theme of "Ingtoogi": the battle of the Internet Trolls it occupies. The show teaches us something new. But it is really interesting to follow the protagonist of the film who had major problems after he was beaten.
It addresses today's technology and the consequences of what today's technology can do to us as human beings. It also offers mental trauma and friendship, and has a lot of charm. The  problem is that with the exception of the invisible friend, he has two  notes, is a little hard to like, they are very strange and they do not  feel much sympathy for them. But it's interesting.

New Topic
Be the first to create a discussion for Ingtoogi: The Battle of Internet Trolls