Killing is wrong? Why? Have we ever thought of that? Why is killing always immoral? Why is killing never okay? Because is life all we have? Because we don't know what's next? Because we don't know if there's next at all? Why do we call those who kill for a ''good cause'' heroes while we call those who kill for the opposite villains? Isn't their cause good for them? Isn't life about perspectives after all? Is killing in wars okay if it's a side we cheer for, and not if it's being attacked? If there are justifications; valid ones -stressing that valid here is also relative- can someone kill? Are killers deprived of emotions as a rule? For the ten thousand time, is life a black-white issue?

This drama basically consisted of killing and was rated +19 because of that. Though So Do Young made a great psychotic vicious killer, obsessed with a woman and his ambition. And even though Jeon Hye Bin ended up killing for her revenge. It’s Jo Dong Hyeok that was the charismatic killer.

Such a conflicted and complex antihero. To become an un-defeatable killer for a cause and later to realize you had actually wasted your life away! Jo Dong Hyeok presented the demon (yacha) Lee Baek Roek in an incomparable way. Accompanied by the murderous look in his eyes as he killed there always lay pain, regret and guilt. Not that he’d hesitate because of the complicated state of mind he’d be in. He’d slaughter a huge number of people with no blink of the eye and then look at his friends, brother or lover with the tenderest eyes ever. Jo Dong Hyeok played a brutal killer carrying his sin on his shoulders but never stopping. He was painful to watch –and so beautiful-. 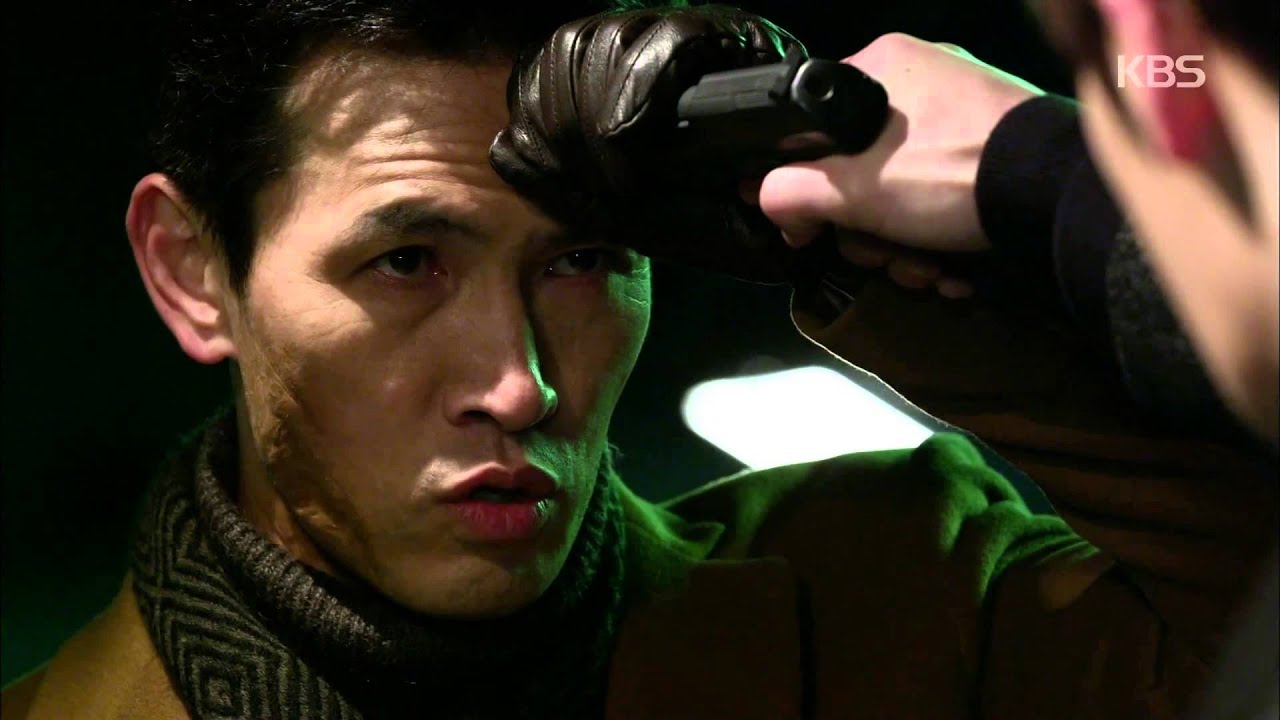 This man looks perfect for a killer role. Yeah, his face is precisely what I mean. Take a look at his works and apart of the comedy ones –he did act in comedies!- he’s either a gangster or a villain and/or a killer. The point is, he’s so goddamn good at it.

In SPY he presented the image of a born-evil person, after he was betrayed. He was already a killer to begin with and when he was betrayed by the one woman he had ever ‘loved’, he lost his mind -whatever was left of it that is-. With a smirk on his face and looking straight in the eyes of his victims, he’d murder anyone, comrade or not. He’d even shoot the very woman he went to the extremes for. The most interesting part is that we don’t see any sign of hesitation or re-thinking, much less remorse. He just, kills. Just like that. Just because those people stand in the way. Simply!

In Joseon Gunman he played a more complicated character which I loved. He didn’t kill because he loved to –not that he hesitated though-. To escape the claws of inferiority and give his only daughter a better life, he played the assassin for the authorities, which granted him status and wealth. I perfectly understood where he came from. It was not fun watching him going around shooting people to death but I could not blame him for the track he was forced to walk. That’s why talking about killing is never easy.

In Faith he was a perfect villain. A ruthless ambitious fellow thirsty for control. It was an experience to watch him with all those accessories and BEAUTIFUL outfits. He got on my nerves a trillion times and I hated his guts. Considering it was my first drama by him it was only natural that I would. He had his own crew of killers with distinctive weapons! Awesome! The perfect typical villain by one brilliant actor. 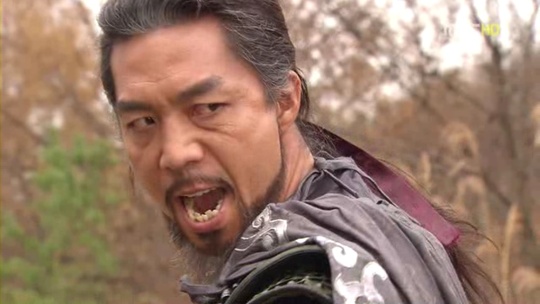 Who loves this man? Or more precisely who doesn’t? He’s just so good at being bad.

Queen Seon Duk. How I miss it?! If I had time I would re-watch it all over again *cries*.

So in the one and only QSD, which swept the awards of 2009, AKK received the Golden Acting Award and he like hell deserved it. Pledging his loyalty for one woman and sacrificing his entire life for her is what Chil Sook did. He travelled the world for her, literally. He lost what he lost and still persisted. And he killed for her, skilfully and mercilessly. He lived and died of her and many people died because of that. His martial art skills were divine. He was so evil in his allegiance. Ahn Kil Kang made Chil Sook thus, scarily untouchable. 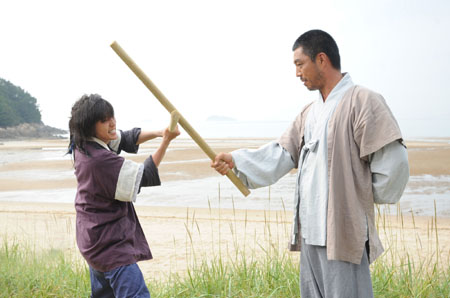 In Iljimae he was hilarious, but the funny monk started as an assassin working for the king. He would kill because he believed in the person he worked for but when that belief shattered, he chose another way. AKK in Iljimae played a killer with a conscience. It was touching to watch. 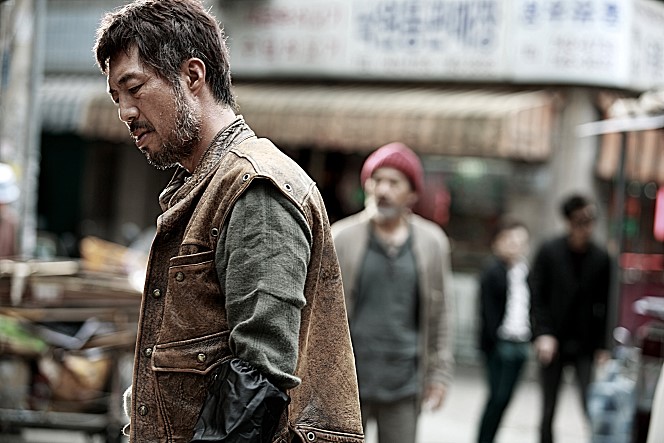 Here comes pure evil. I love this man so much it’s a real struggle for me to watch him being a killer. Why? Because he’s a genius and he lives the role leaving you unable to hate the role, but not the actor. Every time I watched a bad role by him I had to go and watch a comic one to keep my sanity.

Into the Fire, my first Korean film ever. Not all North Korean leaders were bloodthirsty or mentally disturbed. But Cha Seung Won’s Park Mu Rang was. It was the Korean war and he wanted to press forward. Disregarding the orders and even killing his comrades were nothing to him so would killing young South Korean soldiers be?! In such a cruel manner he sent them off with that amused oh-my-god-he’s-just-given-me-gossebumps simper.

In Libera Me he ‘’acted’’ Yeo Hee Soo, a traumatized child who grew up to be an arsonist believing that burning people would save them. The conflict this film left me in, has not been solved yet. To burn whole buildings full of people is definitely not right. But, to trace the actions of the sick arsonist to find the history of an abandoned and abused child is more confusing. The adult man is a criminal. But is the child to blame? Or is he the only one to blame? Who’s the real murderer then? The abuser or the arsonist? Cha Seung Won showed the pain that led to the atrocious actions. I swear I could feel it. I didn’t agree with setting people on fire not for a second. I’m not saying it’s right. I’m not claiming he’s not a fierce criminal. But.. and here we go again..

''Human bodies are great, when I use them to my own pleasure''. Yes, use them. Oh Jae Uk did use them. And Ohm Joo Wan playing that Oh Jae Uk was pure terror. No justifications here. Don’t tell me.

The Five presented one crazy psychopath celebrated in society as an artist. Frightening universal truth, we only care for appearances. The crazy ba***** drowned into his filth for a long time.

I’m so glad when I watched Ohn Joo Wan again in Surplus Princess I didn’t recognize him nor did I know who he was before I finished the drama and started Punch. If his cute image in SP wasn’t in my memory I would not have been able to watch him. I had too dark of memories of him.