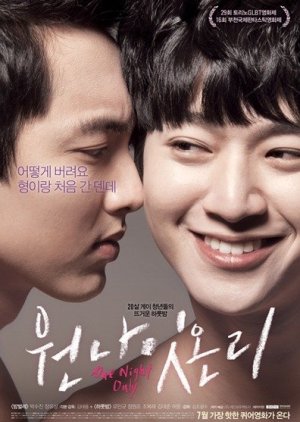 Night Bug: Han Jae meets gay men at a bar in Jongno District, Seoul. He first meets them through an internet site. Once they get drunk, Han Jae steals their money. He is accompanied by Hoon and pretends he is his boyfriend. Hoon is popular, but Han Jae ignores Hoon's feelings for him. One day, Hoon suddenly kisses Han Jae. One Night: Geun Ho is almost hit by a car. At that time, Joon, who is visiting Jinju from Seoul, saves Geun Ho. They happen to meet at a bar later that night. Geun Ho and his friends goes to Seoul with Joon. Edit Translation 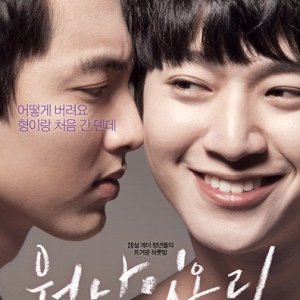 Completed
Rijouku
3 people found this review helpful
Other reviews by this user
0
Jan 21, 2018
Completed 0
Overall 8.5
Story 9.5
Acting/Cast 9.0
Music 10
Rewatch Value 6.0
The beginning is quite confusing I watched with few friends and we got lost but did try to follow up story. Though like after 15mins we finally began to catch up what was happening, so we might be just slow. So on second part of movie we understood it's two different movies yeah we are that slow we didn't get the description properly. I personally didn't like 1st one it was confusing and not that great. Didn't see much connection between Han Jae and Hoon.

So I will focus on second part of it.
Friends go to a new bar that is near and it has hint of comedy that I didn't find in first story. This one was more fun watching. Honestly, it would have been better if it were separate movies even if it took only 33minutes. So a guy falls in love at first sight and it leads to cruel ''reality'' like some comments said and well where most of bl movies do a sad ending as if gay men can't be happy which I find it cruel. But the story was easy to watch.

So ignoring first part I give this 8.5

FIRST STORY:
I want to know what happened to the both of them after that night. The story was hanging for me. The film that I was able to download don't have any subtitle thank God I know how to read and speak a little bit of Korean that is why I was still able to understand it. I want both leads on the first story to have a happy ending though. Both leads were quite attractive too. Indeed you would start cherishing a thing once you don't have it anymore.

SECOND STORY:
This story was quite good but I don't like the concept. What my Korean friend told me was indeed true. That in Korea you can't determine just by looking on their face if they are queers or not. Hay... Easy com, easy go. That's how I view it.