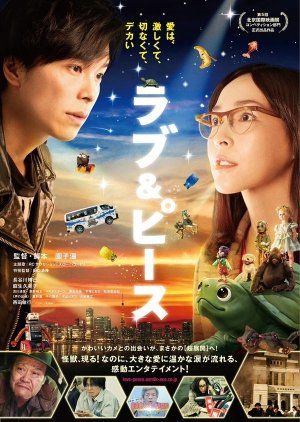 In the summer of 2015 in Tokyo, Japan. Ryoichi (Hiroki Hasegawa) dreamed of becoming a punk rocker when he was younger, but became a timid salaryman at a musical instrument parts company. He has feelings for (Kumiko Aso), but he can't tell her how he feels.. One day, he has a fateful meeting with a turtle on the rooftop of a department store. He names the turtle Pikadon and he adores it, but his co-workers laugh at him. Ryoichi throws Pikadon into the toilet. He regrets what he did. The turtle though goes through sewerage and meets an old man (Toshiyuki Nishida) who lives in the underground. Something then happens. Edit Translation 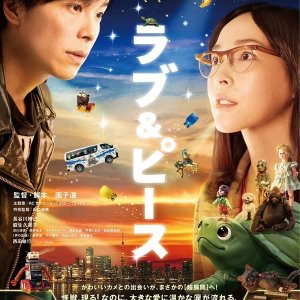 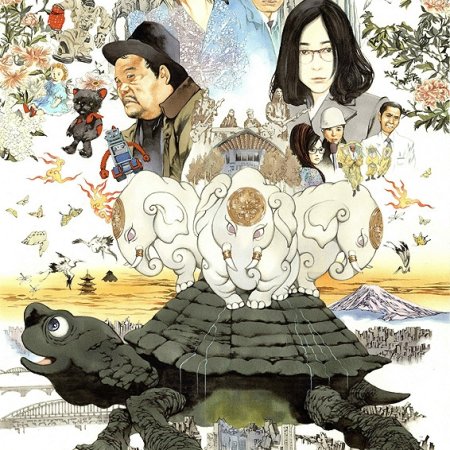 Completed
realdeal
5 people found this review helpful
Other reviews by this user
0
Jun 27, 2016
Completed 0
Overall 10
Story 10
Acting/Cast 9.0
Music 10
Rewatch Value 9.0
This review may contain spoilers
From time to time, we sometimes stumbled a gem in watching films, and this movie is just like that, a cult classic in the making that every fan of this genre would become happy to include.this masterpiece to their collection. A film by sion sono who is perhaps the most surreal Fimmaker today, just expect the unexpected while watching his films, but would you believe me if I say that this film is maybe most suitable for children, kinda mindf*cked right, well that is exactly what I’ve felt while watching this movie. Totally absorbing film, especially if you got what the filmmaker is trying to convey, he ties this lovable family drama about a turtle and a frustrated rock star with issues we have in this world right now..war, capitslism, ignorance among other sh*ts. You would feel the love put by sion in this movie as the development and the events were meticulously done, especially that ending sequence which I will honestly compare to fish story.

The plot is as weirdly as it gets, an awkward guy who dreams to become a rock star got picked a lot from work or wherever he goes XD, due to loneliness he purchased this turtle who became his best friend, he talks a lot with his little friend about his frustrations, dreams and his love for this equally awkward girl at his work. The plot got separated when he flushed his little friend in a toilet cause his office mates made fun of him for having a turtle as his best friend, and this is where the brilliance of this film had begun. Due to regret and loneliness our main lead started humming a melody until he created this song that unifies the nation titled “love and peace”.

Music is perfect, the main song “love and peace” is surpringly catchy, knowing it was created due to his love for his turtle with help of this homeless guy that has some sort of ***spoilers not gonna tell. They have variations of that song throughout the movie so it doesn’t sound repetitive.

There are 2 types of characters in this movie the humans and the non humans, the talking toys. The CGI were far from brilliant, but this just mean that you don’t need cutting edge animation tech if your going to depict a character, what they use here is stop motion animation which IMO is what makes these characters more alive, its like magic. I love this non human characters so I was mindblown by how sion sono was able to pull this, the doll who is looking to be loved again, the angsty cat that act their leader and the robot that serves as the brain for them…these characters plays huge part in the movie. Hiroki hasegawa is somewhat revelation in this movie, yes I watched him before from dramas like mozu and date so I know his versatility, but his transformation from a dork to a wild rockstar is something to note off. Pikadon, our main leads turtle friend gives the best performance by a turtle I’ve ever seen, kinda overshadows hasegawa in some scenes, literally LOL.

A movie that would leave you a strong message and a song that was so catchy that you would hum its melody even after the ending credits.

maybe im biased (because im really emotional and love hasegawa hiroki) but i absolutely adored this movie. its so heartfelt and bittersweet but its also crazy and fun with a lot of surprises. this is one of those movies that i really enjoyed, yet it really made my heart hurt because among all the fantasy and magic and everything its also very real.

the story was...surprising to say the least. i originally watched it just because hasegawa was in it, so i barely skimmed over the provided summary. i had a vague idea that it included music and maybe a love interest - so it blew my mind. the previous reviewer related it to fish story which i can definitely agree with. its got these weird, abstract story lines that somehow link back to each other, but it also has an ending that makes you feel good, in spite of how the rest of the movie was. i personally was very moved by not only the toys story, but ryoichi's greif, and his development! i really loved him but i was so disappointed by what fame turned him into...i have to say im just glad it ended the way it did because i hated seeing him change.

like i said though, im pretty empathetic and i get emotional easily, so of course this movie had an effect on me. i almost cried at least 3 times i think.

as for the cast - they were good enough. there wasn't anything wrong, but i would argue that this wasn't very hard for anyone other than hasegawa (who by the way, was great). i havent seen everything hes done but ive always been really impressed. sometime in the middle of watching this i thought to myself "he really is amazing"...even if its not too complicated of a role he did do a good job. especially in the beginning - i almost forgot i was watching him. nishida is always good too, but as i said this isnt necessarily a complicated film. aside from that the voice acting for some of the toys was okay, but i wasnt really too into maria's voice. the cast over all did a great job, you can tell they really liked this particular film, and put a lot of work into it.

the music was good too! i never do well with remembering soundtracks but i thought multiple times that it was really nice. different from what you would expect to hear at certain times. and the songs - i really have no stopped singing love and peace since i watched this. I loved kizuna too. they just sounded great overall - and i really liked the lyrics. even though theyre supposed to look like he had no trouble with them i think theyre really good! something about the "me wo tsumuri, mimi wo fusagi, kuchi wo tsugumi, donna ni shiawase wo tsukurutte mita tokoro de" that i just love...

rewatch value is definitely 10/10. this movie is just so fun its got everything. i read a japanese review that said its about fantasy, monsters, dame ningen (useless people), music, [s]tarting love, and its just filled with irony and satire. im not sure how else to say that its really good and covers so many genres, i will definitely go back to it in the future.

10/10. i loved it. maybe im not qualified to really review movies, but i seriously recommend it. a note though - it does involve some christmas-y themes, and if you're like me and only like to watch that kind of thing around christmas, keep that in mind. doesnt take away from it at all, i just get into a weird sort of christmas mood seeing santa in the middle of may.

on a last note i would like to say i am incredibly surprised and charmed by the fact that hasegawa can sing. i think im in love. 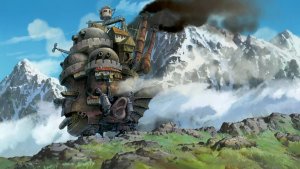