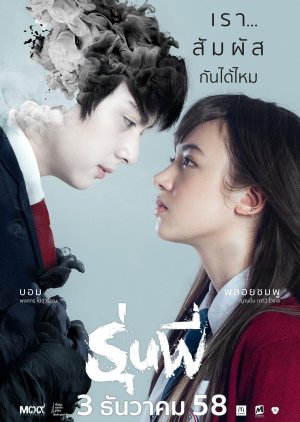 Completed
Senpai
5 people found this review helpful
Other reviews by this user
0
Jul 21, 2017
Completed 0
Overall 8.5
Story 9.5
Acting/Cast 8.0
Music 10
Rewatch Value 6.0
One of the best narratives and soundtrack that a movie can offer!
"Senior" is a youthful, pop movie with the superhero that I do not regret any of the existence of surrealism in "pastel tones".
An original ghosts story in his own novel. An innovative Thai ghost story that recreates and reinvents an entire genre and age style to film as in the folklore of all cultures.
"Senior" can pack a sensory horror, with the sounds and "scents" of ghosts, their trails and nature. It incorporates a number of gothic and popular suggestions, scary cemeteries, detection, in the past, looking at the yellowed and old books, among the walls damp and flaking the historic houses, such as that of dark red with the inevitable body in a walled. ..
The ghostly presences distinguish between the "real", with a human and psychological depth, and those monstrous tunnel of horrors, those in the "Ghostbusters" style. The film shows an ever original imaginative power, and away from the clichés of the ghost genre story, now, in both Hollywood and the East, is largely garbage.

Completed
Kristana
3 people found this review helpful
Other reviews by this user
0
Jan 8, 2017
Completed 0
Overall 5.5
Story 6.0
Acting/Cast 4.0
Music 6.0
Rewatch Value 1.0
I really love supernatural romance especially the ones between alive and dead ppl like vampires, zombies or ghosts. And putting a crime/thriller aspect to it makes a perfect story for me. But sadly it was badly executed in here. The Heroin tried to look intelligent and brave but she appeared rather tense and the crime story felt like the ones in very old black and white movies where you find some clues with the main character and get to interpret it for yourself but the heroine/hero isn't the one who resolves it, it's the criminals driven into the corner who stand there with a gun thinking they've won so they can explain what they did in every detail but then right after they confessed everything of course they fail somehow....
Also the romance wasn't really good, there were no good reasons given for the he both to fall in love so quickly + the hint to a happy end is very unfitting. How can they meet again? Why not explain it?
Well but the horror special effects were really creepy/digusting

Completed
vaberella
1 people found this review helpful
Other reviews by this user
0
May 23, 2017
Completed 0
Overall 9.0
Story 8.0
Acting/Cast 7.5
Music 8.5
Rewatch Value 10
My rating is a 9.5 for overall, however if you look at the specific ratings here, it says otherwise. Those are specific. I'd rewatch this film a few times over, because it's feel good and a bit slap-stick with some rather deep topics.

I didn't think I was going to like it. I really wanted to watch it cause I wanted to see how good looking the boy was. I couldn't tell, cause of the make up. He was cute. I know superficial, but I had to check. He's hot. I'm an old woman not a fan girl, but us old ladies can be superficial too.

There were really deep issues that involve triggers like suicide, bullying, murder, child pornography, statutory rape, etc. Therefore, there are serious issues running around here. While on the flip side there are also cheesy effects that are used that you get or you think kill parts of the film.

Overall, I really enjoyed it. I would watch it again. I thought the acting was really nice. I did like the story. I was hoping for actually a happy ending here. kind of like the boy ghost is reborn or something. Something. Something here. Something. I loved the music. I think the soundtrack was on point. I would rewatch this a few times. It's a feel good film despite some of the heavy topics.

I liked the use of friendship here. Friendship was really the biggest push in the film, if not the mystery and a bit of the romance. The friendship between Ant and Mon really did it for me. Senior/Mon friendship/romance was on point.

These things would make me come back. I would get some popcorn. Pick a Sunday when there is only golf and you have nothing else to do and just watch it. You won't be disappointed. It's a nice matinee film.